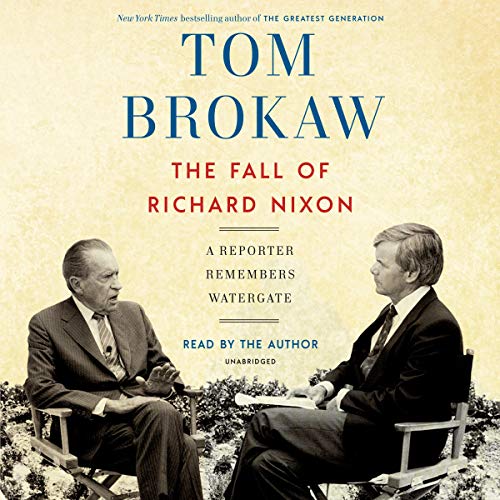 The Fall of Richard Nixon

Best-selling author Tom Brokaw brings listeners inside the White House press corps in this up-close and personal account of the fall of an American president.

In August 1974, after his involvement in the Watergate scandal could no longer be denied, Richard Nixon became the first and only president to resign from office in anticipation of certain impeachment. The year preceding that moment was filled with shocking revelations and bizarre events, full of power politics, legal jujitsu, and high-stakes showdowns, and with head-shaking surprises every day. As the country’s top reporters worked to discover the truth, the public was overwhelmed by the confusing and almost unbelievable stories about activities in the Oval Office.

Tom Brokaw, who was then the young NBC News White House correspondent, gives us a nuanced and thoughtful chronicle, recalling the players, the strategies, and the scandal that brought down a president. He takes listeners from crowds of shouting protesters to shocking press conferences, from meetings with Attorney General Elliot Richardson and White House Chief of Staff Alexander Haig, to overseas missions alongside Henry Kissinger. He recounts Nixon’s claims of executive privilege to withhold White House tape recordings of Oval Office conversations; the bribery scandal that led to the resignation of Vice President Spiro Agnew and his replacement by Gerald Ford; the firing of Special Prosecutor Archibald Cox; how in the midst of Watergate Nixon organized emergency military relief for Israel during the Yom Kippur War; the unanimous decision of the Supreme Court that required Nixon to turn over the tapes; and other insider moments from this important and dramatic period.

The Fall of Richard Nixon allows listeners to experience this American epic from the perspective of a journalist on the ground and at the center of it all.

Praise for The Fall of Richard Nixon

"A divided nation. A deeply controversial president. Powerful passions. No, it’s not what you’re thinking, but Tom Brokaw knows that the past can be prologue, and he’s given us an absorbing and illuminating firsthand account of how Richard Nixon fell from power. Part history, part memoir, Brokaw’s book reminds us of the importance of journalism, the significance of facts, and the inherent complexity of power in America." (Jon Meacham, Pulitzer Prize-winning author of The Soul of America)

"Tom Brokaw arrived in Washington as the rising young star of broadcast news just as the presidency of Richard Nixon was collapsing. Brokaw has intertwined his own story with Nixon’s in a way that is readable, revealing, and always fascinating.” (Evan Thomas, author of Being Nixon)

What listeners say about The Fall of Richard Nixon

Was hoping for some real insight from Brokaw but there is nothing new here. Brokaw fills time with stories about himself, but the pieces of Watergate are not unique or a new perspective. Also, he is hard to listen to, not speaking in the clear tone one is accustomed to from his days on the nightly news. I would pass on this book unfortunately.

I can't get enough information about Nixon. In this current news cycle, This book, along with Bob Woodward's the final days are must listens.

Might have been a good read, had the author not paused to remind me every 3 pages that Nixon was lying and the eventuality of being toppled. A few interesting stories, but hard to enjoy through the stench of disdain for the subject.

Good story from Mr. Brokaw after he looked over his past history when Nixon was POTUS. Some irony for our days and the current POTUS.

Story was short on background

I like.Tom but the story was short on background information and history.
would have been better if it was fleshed out more.

I learned so much that it’s hard to describe in words. I lived through the history, but was too young to fully comprehend all that went on behind the scenes. It’s reminiscent of what we’re seeing today. Same federal crimes, withholding evidence, Altered reports. I highly recommend it.

obviously the impeachment of Richard Nixon kind of mirrors current events. The things I enjoy most about this book are its author and narrator is a legendary reporter who's content is fascinating and happens to be presidential history.