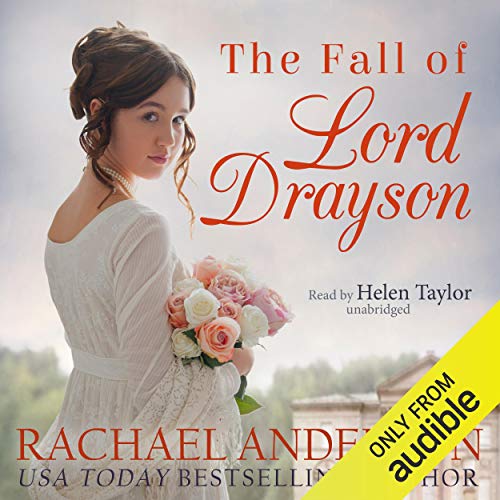 The Fall of Lord Drayson

By: Rachael Anderson
Narrated by: Helen Taylor
Try for £0.00

When Colin Cavendish, the new earl of Drayson, informs Lucy Beresford that she and her mother need to vacate the house they've called home for the past two years, Lucy is fit to be tied. They have no money, no relations they can turn to for help, and nowhere to go. How dare the earl break the promise his father had made to the Beresfords without so much as a twinge of conscience?

Fate plays into her hands when Lucy discovers the earl unconscious and injured in the middle of the road. When he awakens with no recollection of who he is, Lucy seizes the opportunity to teach the earl a much-needed lesson in humility and tells him that he is nothing more than a mere servant. Her servant, in fact.

And thus begins the charming tale of a pompous lord and an impetuous young woman, caught together in a web so tangled that it asks the question: Will they ever get out?

What listeners say about The Fall of Lord Drayson

Really enjoyed the book. Helen Taylor’s narration was excellent. Looking forward to the next book in the series.

Loved the book. First book be this author and I appreciate how she relays love and passion without passionate scenes written in and yet one still feels the tension and longing intensely. Great performance.
Only issue I had was the long pauses in between the chapters. I initially thought I had issues with my download.
Well worth the credit.

This book was a charming and hilarious story! It was refreshing and pleasantly different than most romance novels I've read. I loved every moment!

Similar to the movie Overboard - it is fantastic

This is a great book. I listened nonstop and loved every minute. It is funny and sweet, with a little bitter thrown in. The arrogant wealthy Earle, Collin, seeks to evict impoverished Lucy and her widowed mother from the Earl's property. They had been given use of the Dower House when Lucy's father, the Vicar, passed away. Collin is not very sympathetic or nice about telling Lucy that she and her mother have to leave. Lucy's mother is away from home for a couple of weeks and Lucy is alone with only her female servant. Lucy is distressed by the Earle's eviction and his arrogance. She and her mother have no money and they have nowhere to go. She slams the door on Collin. As Collin rides away from Lucy's house in anger, his horse stumbles and Collin hits his head. Lucy and her servant find the unconscious Collin and drag him back to Lucy's home. They find that he has amnesia. This is similar to Goldie Hawn's situation in Overboard. Lucy decides to teach him a lesson for his bad behavior to her and tells him that he is her man servant, named Collins, and he fills the roles of Butler, Footman and Coachman. He does menial tasks around the house. Again, this is like Goldie Hawn's role in Overboard. Collin and Lucy grow close as they work together and find that they are physically attracted to one another. Then, as it happens in Overboard, Collin eventually finds that he has been tricked. You will have to listen to the book to find out if they can patch up the mess.

I loved both main characters - particularly Lucy. I really connected with her. Collin had to grow on me a little, but he quickly accomplished that feat. It is a great story with good dialog and an interesting plot. The writer is talented and the narrator is good. The only complaint I have is that there is too long of a pause between chapters. Sometimes I thought my I Phone had run out of charge because the pause was so long, but then the reader would pick back up again. I think this had more to do with the production or editing than the reader's talent. That flaw is easy to overlook because the book is such a delight.

This story of Collins and Lucy is fun and adventurous. It is a story that exemplifies what many of us feel times of challenge. Lucy is a truly lovable character.

Sweet traditional Regency romance. Well narrated and very enjoyable. I would buy another book from this author and narrator combination.

Delightful and endearing story. Perfect narrator. A thoroughly enjoyable listen If you are looking for a truly feel good story!

This is a really wonderful Recency romance, with all the elements that entails, and none of the trite devices that plague some stories (overturned carriages, kidnappings, highwaymen).

The only flaw in the audio version is the hissing S's throughout. The narrator has a pleasant voice, nice accent, good timing and expression; however, S is one of the most used letters and every S hissed. It became quite distracting at times, and occasionally, downright annoying. I almost quit listening because of it.

I've spent time in England and this is not a speech characteristic of anyone I know there. It is truly the only flaw in an otherwise exemplary performance.

Also, there are lengthy pauses between chapters -- so lengthy, that at first, I thought something was wrong with my electronics. I've listened to literally hundreds of audio books and never before encountered gaps like that. A slight pause, yes, but not like these. That is a production flaw, and whoever edited the recording could correct it quite easily.

I will read more from this author, but don't plan on listening to any more audio recordings if they are narrated by this reader.
She needs to work on those S's, then she will be great at this.

wow! This book kept me sighing throughout!

I loved this book so much, I read it in one sitting all through the night. (..making for a hard morning the next day, but so worth it!) The romance kept me sighing and the banter had me laughing out loud. This is the kind of book that leaves you satisfied and dreaming at the end. The writing was excellent and flowed beautifully. I love that the story line was believable and did not have any typical Regency cliches often found in modern day novels. The romance developed so naturally and the chemistry between the leads sparked, yet it is a clean book that doesn't leave you feeling scandalized, which is rare these days. I am excited to read/listen to more from this author. I also must add that the narration is excellent! I've read different books where I have found the narration distracting or hard to picture a handsome male lead because of the strange stiff male voice portrayed. This book was very much the opposite. Made me want to go kiss my husband and pretend he was my own handsome Earl. :)

This is a lovely story told with humor and skill. Much better than most and worth the listen.

A fun read, if a little naive

A fun, enjoyable story. there were a few places where people seemed to overlook obvious things andade silly decisions or where the dialogue dragged on recovering a point. Perhaps it could have been streamlined a bit more, or maybe the author likes it pretty much as it is. Either way, an enjoyable clean romance.