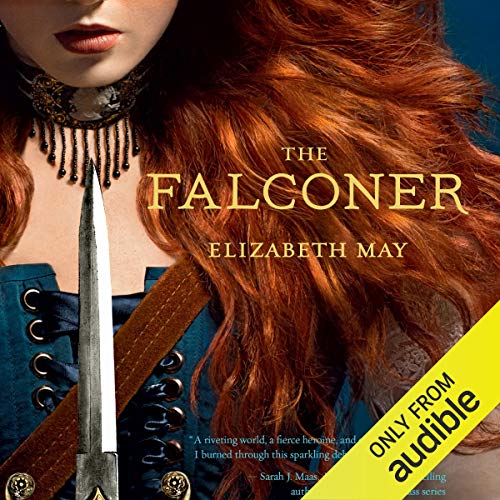 By: Elizabeth May
Narrated by: Susan Duerden

Edinburgh, 1844. Beautiful Aileana Kameron only looks the part of an aristocratic young lady. In fact, she's spent the year since her mother died developing her ability to sense the presence of Sithichean, a faery race bent on slaughtering humans. She has a secret mission: to destroy the faery who murdered her mother. But when she learns she's a Falconer, the last in a line of female warriors and the sole hope of preventing a powerful faery population from massacring all of humanity, her quest for revenge gets a whole lot more complicated.

The first volume of a trilogy from an exciting new voice in young adult fantasy, this electrifying thriller blends romance and action with steampunk technology and Scottish lore in a deliciously addictive listen.

This is a book I will probably listen to multiple times over the years. I thought the story and the world were both very enchanting and exciting. I loved the steampunk feel. I loved that Aileana was supposed to uphold her precarious reputation but her need for vengeance demanded that she fight, even to her reputation's own demise. I can understand how some reviewers felt there wasn't any progression in her character, but this book only covered a matter of about one month's time. I believe in the following books Aileana will grow and mature for the better.

Other reviewers also hated the romantic aspect, but I really loved the idea of a faery/Falconer romance. It was fun and exciting and heated but without being a "bodice ripper," as one reviewer called it (apparently never having read an actual bodice ripper, which are practically rated XXX). There was not one single scene that was even close to a bodice ripper- all would have been rated PG, for goodness sake. The book is definitely geared toward females, though, that's for sure. I'm in my 30's and loved it but I think teens and young adults would too. There is some language but nothing horrible and no inappropriate sex scenes or anything like that. The violence would be the only thing I would consider too much for a young teen, however.

Anyway, while the actual writing might not have been worthy of any sort of award, it's a great story none the less and I definitely think it's a true gem if you're into fantasy with a bit of adventure. I can't wait for book 2, as I hope we will get to learn a ton of backstory.

The narrator was OK. Toward the end of the book I finally got used to her and she didn't annoy me as much, but at first her inflections were kind of annoying. Plus, the fact that she read the ENTIRE book in a half-whisper drove me nuts!

Awesome and romantic adventures of Aileanna the Fae Slayer!! Susan Duerden was awesome and I'll hear her voice in my head while I'm physically reading Book 2 because for some unfathomable reason IT DOESN'T HAVE AN AUDIBLE VERSION!!! I can only hope the 3rd book ( due in June ) will have one!! Please!!

Would you listen to The Falconer again? Why?

THE FALCONER was PHENOMENAL!!! From it's Scotland lure, to it's vengeance and murder, to it's THRILLING, action-packed adventure, and heart-pounding, slow burning romance, that sent heat rising, and toes curling, THE FALCONER was exceptional, and did NOT disappoint!!!

THE FALCONER is indescribably AWESOME!!! I can pretty much say that I loved just about everything about this book. I listened to most of it on audio, but also read some from the physical book. But honestly, I think I preferred listening to it rather then reading it. The narration was flawless, and one of the best I've come across in a long time.

The characters were developed and had all the character traits I love. Aileana was broken and determined, fierce and deadly, but still capable of love and compassion. She was able to play her part to the T: Lady by day, elegant and noble, hunter my night, killer and deadly. And she was soooo good at it. Even though they both started to bleed into each other by the end of the book, she still played her part regardless of opinions. She was the perfect character for this book. I loved Aileana and can't wait to see how much more deadly and dangerous she becomes to her enemies in book two.

And Aileana's mentor, and close but distant friend, Kiaran McKay was the perfect example of AWESOME!!! Ruthless and cunning, dark and dangerous, deadly, but loyal to his cause, and determined to right his many wrongs. He was the perfect mentor for Aileana—smart, skilled, strong, powerful, deadly, and pushed her to the breaking to teach her her weaknesses. And he was so dam sexy at doing it!!!

The world-building was unique and VERY well done. I loved the historical and Scotland background, intertwined with dark and dangerous faery's tearing the city apart. I thought the elegant lady by day and huntress killer by night was brilliant, and tied into the rest of the plot with ease and grace. It was just phenomenal!!! I loved the way it was done, written and narrated!! Yup, it's safe to say I pretty much loved everything about this novel and characters!!!

Aileana Kameron is a Lady by day, and a killer by night... She's been that way since last year, when her mother was murdered, torn to shreds and had her heart ripped from her chest right in front of her. But the person, or should I say thing, that killed her mother wasn't even human at all. She ordinarily wouldn't be able to see them, the predators preying on the weak, but she was wearing the thistle—A plant that gives humans the abilities to see their predators coming. And the predator that she seen that unforgettable night, was more terrifying and deadly, then anything she's ever laid her eyes on. But that was just the beginning for Aileana, aka Kam...

They hunt weak humans, they devour their energy and kill them after their sucked dry. They are in all forms and shape, they are strong and mighty, they are imprisoned under the city, and they are breaking free little by little.They will either end the human race, or imprison them all. They are dangerous and deadly, and have many different strengths, and they are preparing to rise up and rule again, and if not stopped, they will defeat and conquer, and all will be lost to the human race. They are called Faerys, and they are coming....

Only one can save the human race from death and imprisonment, and she is the last of her kind, the last remaining Falconer with the power to stop them. But she is only one against many, she is just learning and acquainting herself with her capabilities, she has yet to come into the ultimate power of a Falconer, but she will give her life to save them all. She is a hunter, the hunted, a predator, the prey, a killer, the rescuer, unstoppable, the defeat-able, she is lady Aileana, last Falconer and Scotland's only hope, and she will rise up and fight for them all...

Dark, dangerous and deadly—all my favorite qualities in a book, and THE FALCONER had them all and MORE!!!! The dark essence and deadly demeanor that THE FALCONER portrays is precise and flawless. I can not even come close in expressing the full depth of my love for this book. And that ending was strait TORTURE!!! It should really be freaking illegal to end a book like that, SERIOUSLY!!!! ;)

Overall, THE FALCONER is one of the best fantasies I've read this year, and it will definitely be going on my favorites shelf where it will stay. I loved everything about this world; from the elegant, yet rough writing, to the superb acting of the narration, it was all just flawless and addicting, and totally time worthy. I would HIGHLY recommend this novel/series to ALL fantasy and paranormal fans out there!!! Their really is NO WAY it could possibly disappoint!!!

I have reread it 3 times

I have never written an audible review, and don't think I have ever reread a book. However, I not only finished this book litterally in a day, I reread it 3 times. The highlight of this book was the characters, you could really see Cam growing and changing, from her flaws to her strong points. I love how Elizabeth May made it clear that she was broken, but didn't over use it. Each character is complex and in the right place. The setting is incredibly fascenating. While May did not completely avoid comon tropes (no one really can in this genre) she made it interesting, exciting. Its simply indescribable .

A fresh new perspective on fairies and steampunk!

A darling story with and new take on fairies mixed with a twist of steampunk. The characters are well formed. I'm an avid fiction reader and a professional psychologist (PhD) therefore character flaws tend to jump out at me. Elizabeth does a wonderful job in character development and story design.

The narration is a challenge. I'm not Scottish, but those who are Scottish probably struggle listening to the accent. It's just difficult to understand. After a few chapters you can become accustomed to it as long as you are willing to stick it out. And its worth it if you are willing. The narrator needs some practice, but talent is present and I see a bright future for her.

Elizabeth is a very talented and creative author and I look forward to reading more from her.

Simply Wonderful except for the Abrupt Ending

I don't like the abrupt end to the book; other than that, it was a terrific story, couldn't stop listening.

great fantasy , absolutely loved it excellent job of hooking the audience looking forward to the sequel

A typical story with some different details.

This book took on the typical plot of fierce heroine (who doesn't love that!) in a fantasy land but it was refreshing in it's use of humor and details. The land that Elizabeth May depicts is filled with details of unique steam punk contraptions immersed with faeries and love. Her descriptions of the surroundings enter you into a land that is not as commonly defined in this genre of book.

Elizabeth May has also developed some hysterical characters in the book making me laugh out loud. If you are looking for a book that has romance, drama, heartbreak, action, and laughter - you can find it all in here.

I would have liked to see some deeper development of story line, especially the background history. But all in all a nice little read that'll take you away for a little bit.

Ending was quite interesting and abrupt, I will be reading the next book!

Did The Falconer inspire you to do anything?

Be my own heroine and work out!

The narration was marvelous. The accents, particularly the banshee's, just brought the story to such vivid life. The story itself started a little slowly, but once it picked up I couldn't stop listening!

I loved this book you have to read the others in the trilogy it is one ove the best books I have ever read.