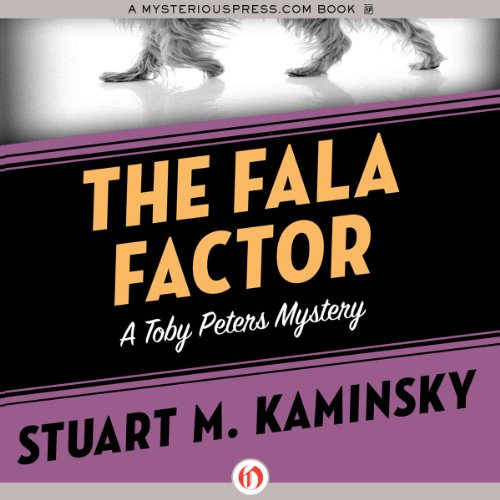 If he is surprised to find Eleanor Roosevelt waiting for him in his dingy little office, Toby Peters does not show it. Although this is his first time working for the First Lady of the United States, years of private investigations for the Hollywood elite have left him unfazed by a famous face. The First Lady comes straight to the point. Six months after Pearl Harbor, the only thing that keeps her husband from buckling under the pressures of the presidency is his dog, a sprightly black terrier named Fala. As America gears up for war, Mrs. Roosevelt has a secret domestic problem: She fears that Fala has been kidnapped and replaced by an imposter.

As he investigates the dog’s whereabouts, Toby learns that the dog is the linchpin in a fiendish plot against the White House. He must recover the real Fala quickly, for the fate of the free world rests in the terrier’s paws.

Would you consider the audio edition of The Fala Factor to be better than the print version?

It is as good or better than any version.

What was one of the most memorable moments of The Fala Factor?

The entire reading of the book is ALL memorable.

He is dramatic and he moves the story along.
His voices fit the characters and it flows.

It is so good that I played parts over 3 days.

We need more of this series.

Thank you for giving new life to this classic series.

Great addition to the series. Very enjoyable. One of my favorite series. Aways had some bits of real history thrown it and news from that time.