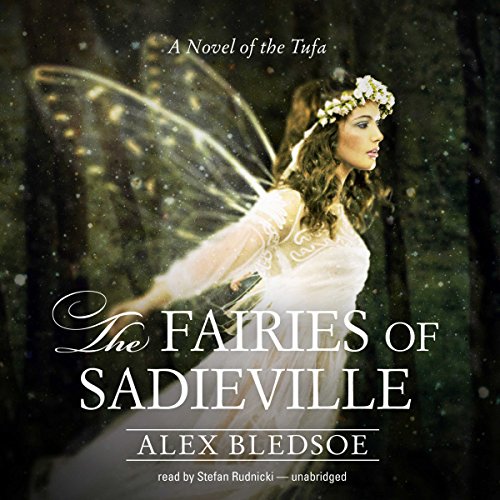 The Fairies of Sadieville

"This is real." Three small words on a film canister found by graduate students Justin and Veronica, who discover a long-lost silent movie from more than a century ago. The startlingly realistic footage shows a young girl transforming into a winged being. Looking for proof behind this claim, they travel to the rural foothills of Tennessee to find Sadieville, where it had been filmed.

Soon their journey takes them to Needsville, whose residents are hesitant about their investigation, but Justin and Veronica are helped by Tucker Carding, who seems to have his own ulterior motives. When the two students unearth a secret long hidden, everyone in the Tufa community must answer the most important question of their entire lives - what would they be willing to sacrifice in order to return to their fabled homeland of Tir na nOg?

What listeners say about The Fairies of Sadieville

An engaging story of the Tufa series, which made me feel like I’m relishing in more secrets of this community.

a fascinating series comes to a close...

There are several titles in this series. Each can be read as a stand alone, but they contain recurring characters and are more rewarding if read in order. The writing is wonderful - creating an enticing, somewhat menacing, atmosphere with vivid characters and an underlying mystery that runs through each novel, adding an appealing layer to the emerging history of the settlement. Elements of romance, sacrifice, humor, tragedy and justice blend with the artistry of folk music and a commitment to traditional craftsmanship. Drama, adventure, excitement, and the occasional murder, are driven by the characters' schemes and rivalries - or incited by unwelcome incursions from outside the community.
These are terrific books and I hope that someday there will be additional tales set in this lovely, challenging, world.

The whole story was really depressing. So many people killed off for no reason. If you are looking for a happy ending, this story may not be for you. I did enjoy the series overall but the ending is so convoluted and disappointing that I wonder why I was so invested. Such is life and everything does not always work out in the end.

Well told stories and this final book tied them all together. It was fun being in their world for a time. I’ll miss it. May have to revisit soon.

wonderful ending to a wonderful book series. thank you for writing this. I'm sure SJ Tucker and Tuath-a-dey will live those mentions as well. I've been able to see them both at Pagan Unity Festival in Tennessee.

We are given backstories and answers to all that come to know about the Tufa over the series. We also get to see all of our favorite cast members tied together. Hard to save goodbye. Enjoy the surprises!

this series has been one of the best on Audible. I can't believe that they have not been getting more coverage. the story telling is immersive and the setting is fantastic. I hope this catches on enough for a Netflix or HBO series.

I can only hope that this is not the last of the Tufa stories. I’ve read them all and this is my favorite. I was engrossed from beginning to end, fully invested it the story. I love how the author has carried the personalities forward in time in each book so they are remembered.

Love all 5 of these books and this last one was great as well! Stefan did a great job as always!!

Love the whole series, but this book had the best narration. Using the Irish brogue gave this book authenticity and pulled it all together. I really hated for it to end. Hope to find another audible series similar to this one.