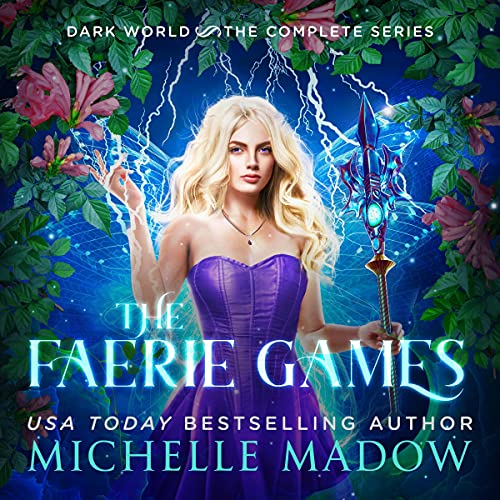 The Faerie Games: The Complete Series

On the island of Avalon, everyone has magical abilities.

As if being the only nonmagical person on the island isn’t bad enough, her parents happen to be the king and queen of Avalon - and the most magical people alive.

She’s never felt like she fit in on Avalon, but that all changes when she leaves the island and meets Julian - a mesmerizing, mysterious human. Everything feels perfect between them at first... until he drags her through a portal to the enchanted realm of the fae, where Selena learns that there’s more to the mystery of why she doesn’t have magic than she ever imagined.

Long-buried secrets soon emerge, and she discovers that to escape the fae realm, she must compete in the annual Faerie Games - a televised reality show competition where half-bloods fight to the death.

To survive, she’ll have to make alliances, unravel the mysteries of her past, and figure out whether she can trust Julian. He wants to help her, and there’s no denying the connection between them. But Julian’s already betrayed her once. Why wouldn’t he do it again?

Begin the now completed five-book series with over 13,000 ratings on Amazon and Goodreads. This fast-paced fantasy series by the USA Today best-selling author of The Angel Trials, Elementals, and The Vampire Wish is filled with twists you’ll never see coming - and revelations that will keep you up late listening on.

What are you waiting for? Scroll up and click "buy now" to find out why listeners all over the world have fallen in love with the Faerie Games series!

What listeners say about The Faerie Games: The Complete Series

this book has a better format than angel trials and wasn't as redundant or repetitive. it also had a much better ending

I loved the series

Spoiler Alert! I loved the series. Usually, they get boring after the third book. I was a little disappointed with the ending because I didn’t feel like all ends were tied up. I was left wondering what happened to the people in the hidden city and the best friend?

I really enjoy this series but it’s not complete. Selena is a little annoying and selfish but all in all, she has a strong character and is young. Patricia Santomasso did an amazing job at narrating

This book had me from the 1st chapter. Loved this book. I hope there is more to come

I’m new to listening to the YA mythical category, but WOW! It has the “ideal” Young Adult Trifecta! Adventure ☑️ Thrills ☑️ Steamy Romance (without going 50 shades on us) ☑️!
Another win for Michelle Madow!

Thank you so much for risking your art with the public! I know it can be a huge risk and struggle, but you have made a generation very happy!!!!

I don’t often write unkind reviews as no author goes out to write a bad story. But I could not finish this. The grammar was cliched and in places painful to listen to. Storyline was predictable. Characters internal thoughts were annoying. It needs a lot more work. Like a bad cross between the Hunger Games and a million other books about lethal, magical competitions.