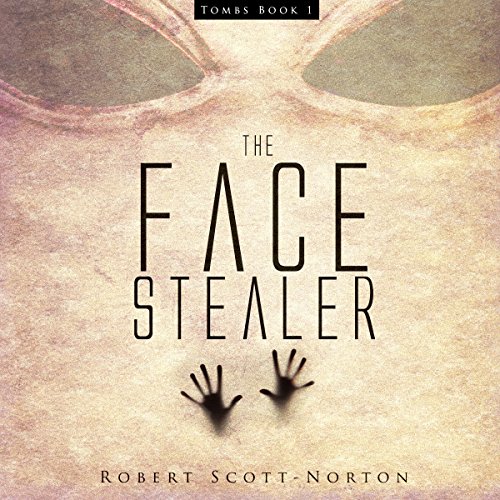 By: Robert Scott-Norton
Narrated by: Paul Cram
Try for £0.00

When faceless assassins stalk the seaside streets, the only vacation is permanent.

Max Harding wanted nothing more than to leave his wife, but when his mistress is found gruesomely murdered on the beach, he becomes the prime suspect.

But in this quiet seaside town, appearances are deceiving, and secrets not only run deep—they're terrifying. The faceless killers have been set loose and Max soon finds himself fighting for humanity against an enemy he knows only too well.

The Face Stealer is the first book of Tombs, part of The Tombs Legacy. If you're a fan of Torchwood, Stephen King, or The X-Files, then you'll love a series that combines all of their best traits in a fast-paced, captivating, thrilling adventure.

Buy THE FACE STEALER and take your first steps into a universe of darkness created by author Robert Scott-Norton.

What listeners say about The Face Stealer

What made the experience of listening to The Face Stealer the most enjoyable?

The Face Stealer was very different from other books I have read in this genre. I was gripped until the end.

The suspense and the fact that I was kept interested.

The confrontation with Max and the gun.

It made me a little bit scared...

Great novel. Lots of suspense. Originality. I really enjoyed it.

Would you ever listen to anything by Robert Scott-Norton again?

of course. there's always the chance of a good story

Would you listen to another book narrated by Paul Cram?

of course. there's nothing wrong with his work.

If you could play editor, what scene or scenes would you have cut from The Face Stealer?

i'm sorry but i would just try to make the story more than a flat line.

too many unanswered questions and loose ends

Max’s wife is crazy, jealous and violent.  A poor combination to face when she catches Max cheating on her and asking her for a divorce.  His lover ends up dead and faceless and Max becomes the number one suspect.  He must evade the police, faceless zombies, aliens, and worst of all, his homicidal wife.

The action continues unabated throughout the book as Max attempts to unravel the mystery of the faceless people, what happened to his wife and the strange man named Thaddeus who seems to be behind it all.  A web of government cover-up and murder further the intrigue surrounding the one person who could explain it all if she chose to.

The Face Stealer is about aliens, secret government agencies and some advance tech thrown in for good measure.  The book is one non-stop chase scene that tends to get confusing at times, jumping from locations without warning.  Characters are introduced and dropped leaving us sometimes wondering why they were there in the first place.

If you are an alien invasion devotee you may want to give this a listen.  It is difficult to recommend it to others, unfortunately.  There are just too many unanswered questions and loose ends to give satisfaction to the mystery.

Paul Cram performs the story with his generally pleasant voice.  His style may not appeal to every listener, however.  He pauses in odd places and occasionally stumbles over a word.  Not a deal breaker by any stretch; it is just that the listener is pulled out of the story on occasion by Mr. Cram’s style.

There are some very interesting ideas in The Face Stealer and some genuinely intriguing characters.  It is just that the former are not explained well and the latter are discarded unceremoniously leaving the listener unsatisfied.  This is just one listener’s opinion, of course.  Give it a trial and decide for yourself.

Audiobook was provided for review by the narrator

Review From The Audiobook Narrator

I read this book a few times. first to enjoy the story, then to perform it as the narrator.
While reading it the first time, I found myself hating the character of Max... Spoiler Alert... but then by the end I really found myself cheering for him and was glad to see his involvement with the end of this story and how he became a hero.
I had heard this book be compared to the likes of Torchwood, and was glad to not be disappointed with the comparison.
This book would make a great sci-fi TV show series.
I am excited to have people listen to it as well, I really enjoyed reading and performing it. Am looking forward to more from the author Robert Scott-Norton.

What was this? Robert Scott-Norton tried, i will give him that. But Fantasy: Paranormal? I am not sure what this book was, but it is the strangest, and worst over 9 hours i had in a wile. Paul Cram is more then good enough, but what was this? A time stealer, that is what! *Sigh* Not a good book, if you can call it a book!