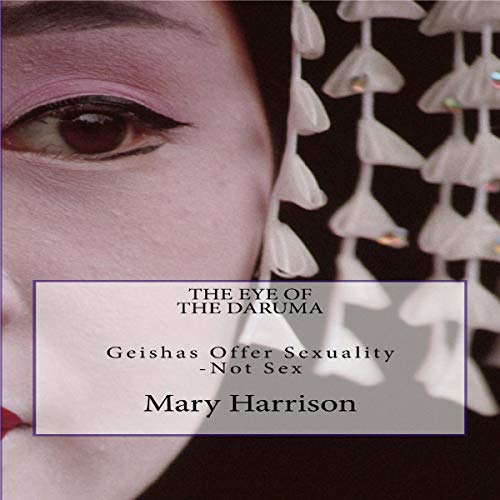 The Eye of the Daruma

The Eye of the Daruma

The amazing adventure story of a young Japanese woman in the time of the great earthquake of 1905. We follow the young woman, Chie, through many trials, tribulations, and exciting challenges.

Chie is attractive, intelligent, and resourceful and faces many terrors along the way - not least strong and appealing men.

Mary Harrison has been an inspirational writer over the years. She loved writing this Japanese story about the many exciting adventures and challenges of Chie. She especially enjoyed the detailed research on the geishas and all things Japanese. Mary was proud of the The Eye of the Daruma.

Mary started as a newspaper journalist in Bedford soon after her second son, Peter Antony, was born. Pete is now a school teacher and was her inspiration. Peter and Mary Harrison had four sons, Paul, Peter, Philip, and Christopher, and a daughter, Eve Louise.

Mary was especially successful on radio and TV. For many years, she broadcast in London at the LBC radio station. Mary was paranormal consultant on The Pete Murray Show. Her most notable TV broadcast was on lTV's This Morning, when she asked viewers to phone in with their paranormal experiences. There were so many calls that the lTV phone network became jammed. Richard and Judy were dumbfounded by the reaction Mary caused on that special day, October 31.

Mary sadly passed away in 2002 and is deeply missed. Her husband, Peter, lives in Hampstead and writes plays, films, and books. He continually pays tribute to Mary in books, blogs, and discussions.

Mary was always Peter's inspiration from when they first met at College Entertainments, Archer Street, London, in February 1971. Mary came to work for Peter as his PA and college coordinator, neither realizing that it was the start of a fantastic 30-year romantic partnership.

Lovely story. Still in the beginning. The narration, however, is terrible. The narrator has no proper voice intonation, some places faulters over words, stops to turn the page, swallows audibly. This prevents the listener from really living and enjoying the story properly. Maybe a narrator with an oriental accent, could better produce the required ambiance for a great listen.

Narration was very unprofessional. The story line was ok though seemed to end too abruptly.

british narrator? i prefer japanese/asian narrators when listening to books based around geisha/asia. but, ok, fine. pls tell me if anyone actually listened to the recording before publishing it!
the recording sounds as if the narrator was in a subway bathroom! such poor sound. similar to an amateur cassette recording from the 70’s