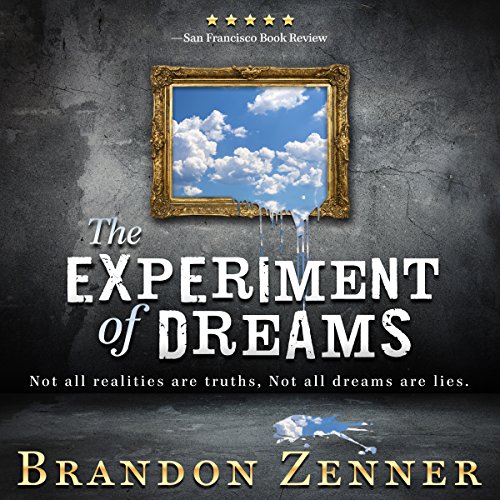 The Experiment of Dreams

A shocking psychological thriller: Benjamin Walker's lifelong career of testing experimental drugs and medicines, as well as participating in fascinating sleep-related studies, has come to an end. A new and lucrative job opportunity is offered to Ben, working on a project named Lucy, a machine capable of reading and recording a person's dreams in intimate detail. All is finally going well for Ben...until strange dreams of a town named Drapery Falls begin to plague him, and memories once hidden begin to reveal themselves.

The doctors and staff onboard team Lucy are not who Ben thinks they are, and Mr. Kalispell will stop at nothing to keep Ben's emerging memories buried for good. Ben is put on a collision course that will bring him to the brink of total insanity and perhaps even death. At the heart of it all, Ben's worst enemy is his own mind, and he must confront his past in order to save his future. The twist and turns in The Experiment of Dreams will keep you guessing, down to the very last line.

What listeners say about The Experiment of Dreams

The story was well written and performed with some interesting twists. It is a very enjoyable listen.

Fascinating story that kept me guessing on what was going to happen. Just when I thought I had it figured out, there'd be another twist. Definitely enjoyed this and look forward to more.

This book repeatedly appeared in my recommendations on every site: Audible, Amazon, GoodReads, ets. So after reading and re-reading the summary, I think I purchased it when it was free something like a year and a half ago. I still didn’t find the urge to sit down and read the thing.

Then I found it on Kindle Unlimited with narration. So, ok, I borrowed it and dove in.

Just like all the other three star and below reviews, I was very interested in the very beginning. Even with Ben sort of shrugging his shoulders at the hinky stuff and pressing the accelerator without too much introspection and curiosity, I was kind of ok with that. I mean, you have to put aside your disbelief sometimes, right?

The machine itself, Lucy? Well, scientists have been trying to build something like that for a while now, especially since those things have appeared in several movies over the past 50 years or so. I can wrap my mind around it easy.

So the first half of the book is beautiful, aside from the easy way Ben has of sliding into this strangeness in the first place. The descriptions are surreal, just like the cover. I liked it.
However, it starts flailing around the second half where suddenly we’re in the middle of so much exposition it felt like an historical text. I did like the twistiness of the end, but probably could have done without the character monologues telling me what happened.

So I’m hovering right about three stars despite the fact that I love the premise. Because who needs to make themselves finish a book when you’ve already figured out the ending and all the characters are doing is telling you in a very long winded fashion that you’re right?

Where does The Experiment of Dreams rank among all the audiobooks you’ve listened to so far?

This is actually the first audiobook I've listened to. Used to listen to books on tape (years ago) while commuting, but this is a much better experience.

There are several twists in this book that are unexpected. I didn't see them coming, which is unusual--I'm usually not surprised.

There has been a lot of speculation over the last several years about nano technology and the type things that could be accomplished with it. So try on for size the idea of a serum containing “nanos” injected into the blood stream that would make it possible to make a video recording of a person’s dreams during REM sleep. There are a plethora of benefits that could be derived such as aiding doctors in better understanding the workings of the mind of people afflicted with all manner of mental illness. This tale explores one subject of illegal experiments into this realm with one young man and the ramifications from same. The writing was enough to hold my interest, but it seemed, at some points, to go a bit too far into the mundane and irrelevant. It did, however, give me a bit of food for thought. I wouldn’t hesitate to try another book by this author. 4 stars.

This was interesting, but became too contrived with too many coincidences and "twists".

Audible has a minimum word count for reviews - Shame!

The narrator was very average. Did not have a wide range of expression to depict different characters. I did bond w the main character and wanted him to be ok in the end, yet all characters seemed to lack emotional depth. I guess my overall response to this story is that it was ok, but not great.