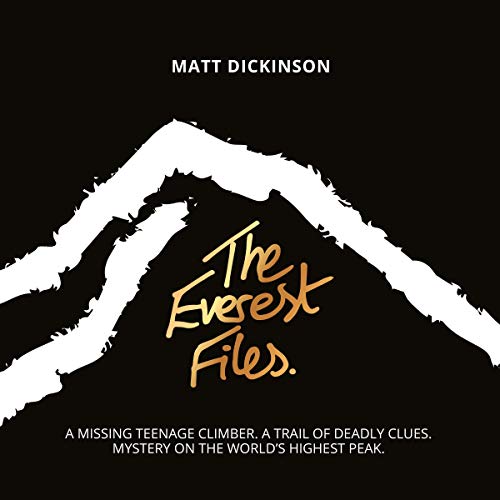 By: Matt Dickinson
Narrated by: Stewart Crank
Try for £0.00

Nominated for the CILIP Carnegie Medal 2015.

A thrilling journey to the dark side of Everest.

In the deepest Himalaya, a story is spreading like wildfire. The story of an Everest expedition unlike any other. An expedition that ended with mysterious disappearances...and death.

This is the mystery that 18-year-old Ryan Hart sets out to solve.

Ryan is on a gap year adventure, working for a medical charity in Nepal. When a local girl begs him to investigate why her 16-year-old friend Kami never came back from Everest, Ryan cannot resist the challenge.

A solo journey takes Ryan deep into the mountains, where his detective work finally pays off. What emerges is a shocking tale of lies, betrayal, and obsession.

All played out on the lethal slopes of the highest mountain in the world.

Little by little, Ryan is falling under Everest’s deadly spell.

What listeners say about The Everest Files

An adventure on Everest

Matt Dickinson writes a tremendous adventure story played out on the slopes of Mount Everest. With Nepalese Sherpa teenagers taking centre stage the book is fun and thrilling to read/listen to. Highly recommended.