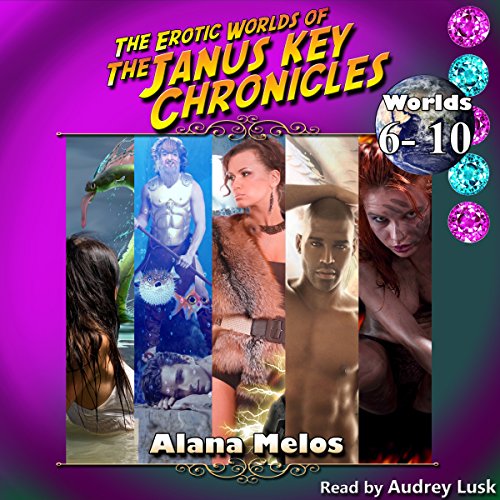 Traveling through otherworldly dimensions has never been so sexy....

World 6: Slimed by Sea Serpents - Aboard a ship hunting for treasure, the twins seek out treasure of their own... the missing piece of the Key of Janus! Debbie is captured and ravaged by a pack of sea serpents and led to a mysterious island which may contain the answers they've been seeking.

World 7: Pooper Probed by Poseidon - Dirk Gudgeon woke up to find his twin sister missing! Determined to find her in a hostile environment, Dirk must use his sexual wiles to free himself from lusty hoplites, find the Key of Janus, and somehow escape from a god's monstrous, vile intentions!

World 8: Thunderstruck by Thor - Debbie Gudgeon woke up to find her twin brother missing! Determined to find her sibling, Debbie must use her determination, strength, and sexual wiles to seduce lust filled vikings and a god! Captured and trapped in Valhalla, she must find a way to activate the Key of Janus without her brother, all the while satisfying Thor's wanton and wicked cravings!

World 9: Manhandled by the Messiah - After escaping from Poseidon's fiendish clutches, Dirk finds himself in yet another world, cursed! He's unable to rise to power the Key of Janus, which requires sexual energy. Fortunately for our hero, he hears of a healer in this world who is none other than Jesus of Nazareth!

World 10: Reamin' Demons - Having escaped from Valhalla, Debbie now finds herself in hell... for real! She's in the body of a sexy succubus, filled with lusty thoughts. Our heroine decides to take matters into her own hands, seeking out partners to power the Key of Janus to get her out of there... but Lucifer, the Prince of Darkness, might have other ideas!

So, I picked this one up because it was free and I enjoyed the first volume far more than I had thought I would. I'd still say this book was like Fringe meets Quantum Leap with a very sexual twist.

Don't expect anything profound out of this book, but it was a heck of a fun ride!