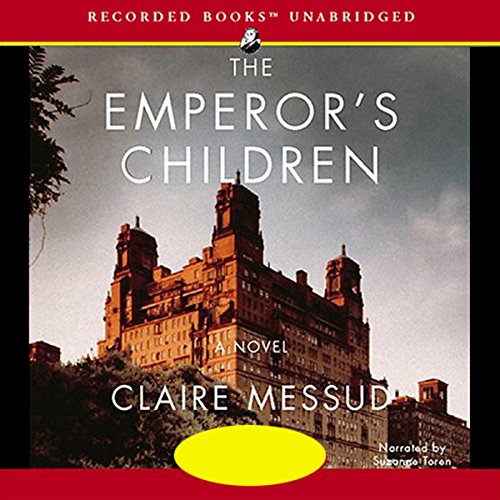 By: Claire Messud
Narrated by: Suzanne Toren
Try for £0.00

Two-time PEN/Faulkner Award nominee Claire Messud is hailed as "a writer of enormous skill and stylistic grace" by Publishers Weekly. This wonderfully crafted comedy of manners was called a "stinging portrait of life among Manhattan's junior glitterati" in a starred review by Kirkus Reviews.

Friends at Brown University, Marina, Danielle, and Julius are still looking to make their marks as they approach their 30s. Marina lives with her celebrated parents on the Upper West Side while trying to complete her book. TV producer Danielle's success is due to the puff pieces she churns out. Freelance critic Julius can barely make ends meet. Into this mix comes Bootie, Marina's college dropout cousin, who is just the catalyst the three friends need to start making significant changes in their lives.

"Tangy dialogue, provocative asides, glittering imagery, and nimble postulations build toward an electrifying and edifying conclusion." (Booklist)
"Her writing is so fluid, and her plot so cleverly constructed, that events seem inevitable, yet the narrative is ultimately surprising and masterful as a contemporary comedy of manners." (Publishers Weekly)

What listeners say about The Emperor's Children

this book was totally addictive, I wasn't really in the mood for it when I started it, but I couldn't put it down. One womans journey through history told through the lives of her family. Get out of your comfort zone and listen to this book, you won't regret it.

The terrific performance by Suzanne Toren made this good book great. She doesn't merely read the book, she breathes life into each character. Each person is utterly distinct and vivid. I'd like to recomment this book to my book group, but only if they listened to this version instead of reading it!

This was one of those "why did I choose this?" selections for me. The majority of reviews state it like it is: a bunch of young adults whining about their sorry self-fulfilled lives. If that is your thing, go for it. But I need something a little more solid.

This is a best seller?

What a waste of my ears. I downloaded this book after reading glowing reviews of a work about post 9/11 life. It was an exercise in narcissism. The characters are self absorbed and though endlessly analyzing their own lives, have no real contact with the world outside of their egos. They go nowhere and do nothing, even as a collective tragedy occurs on their doorsteps.

The narration was good, but the book is not one that I can recommend. The characters, with the exception of one or two minor characters, were incredibly self-involved and annoying. I listened to the end, merely because I wondered if there would be any positive resolution to any of the story lines--there wasn't. It is difficult to care about the characters when they are so unlikeable. Although spouting rhetoric about the value of social conscience, none of the major characters acted in ways to support the rhetoric. The one character who did act responsibly (Marina's mother), was unfathomable to her family.

I loved the book but wasn't crazy about the narrator. I really wanted a simpler, less obvious reading of what is a morally and intellectually complex story. I felt as though the reader didn't quite trust the writing to speak for itself so added unnecessary embellishment.

I felt that several of her characterizations were really heavy-handed. Instead of trusting the listener to determine a character's strengths and weaknesses she seemed determined to telegraph them for us.

Ultimately this overwrought interpretation rests squarely on the director's shoulders. It is the director's job to help the actor temper her reading. Because he didn't do this, the reader got in the way of the beautiful narrative flow of this magnificent novel.

18 Precious Hours For This?

If you like whining, self-involved people with delusions of grandeur who do not even remotely evolve in any significant way despite living in the center of the earth shattering events of 9/11, then this book is for you. Ginger, from Vallejo was absolutely correct in her review. I decided recently to attempt to read or listen to every critically acclaimed book from 2006 which is why I purchased this pointless waste of time in the first place. It was well narrated and stylistically well written, but why it is so popular with the critics is far beyond me. You want to read or listen to a great and well received book from 2006, then download "Special Topics In Calamity Physics" by Marisha Pessl (don't let the wordy and scattered prologue turn you off.. stick with it. It turns out to be absolutely fabulous) or one that received hardly any recognition at all "The Divide" by Nicholas Evans. Both of these books are wonderful, and once I completed them I felt my time and money had been well spent.

Woes of the over-privileged

None of the central characters in The Emperor's Children are very likable people, though they aren't portrayed without some sympathy. Murray Thwaite is an egotistical, two-faced ivy tower intellectual used to being fawned over by the media. His overindulged daughter, Marina, is "taking a year off" for a fatuous writing project, but is barely working on it. She gets involved with Ludovic Seeley, an ambitious, Machiavellian Australian who intends to launch a magazine. Murray's nephew, Bootie, cultivates a creepy, parasitic idealism reminiscent of Ignatius J. Reilly in A Confederacy of Dunces.

Messud takes her unpleasant cast and sets their lives in speeding motion, like billiard balls on a table, gleefully letting them race towards their inevitable collisions. Later in the book, the September 11 attacks occur, creating their own complications in everyone's lives -- which have little to do with the death and destruction, of course. It's a scathing glimpse at the underside of the privileged NYC elite, focusing on their self-absorption and sense of entitlement, and it's hard not to watch their struggles and falls.

To be fair, though, the characters are a bit caricatured, offering little to redeem the liberal intelligentsia, and not reflecting much that's positive about any other way of being. I often pitied these flawed people, sometimes identified with them, and half wanted to see them get their well-deserved comeuppance, but are they really the reality?

Still, I enjoyed this book and its plotting. If, like me, you're an urban dweller who sometimes find yourself at cocktail parties with people from this world, you might get something out of this scathing drama of its aspirants and pretenders.

Not all it is cracked up to be!

Not a bad book but this story has no point and in the end I was disappointed with the time I spent listening to the book.

I struggled through the first half of this book trying to like it because it was given such rave reviews, put it aside for several months, came back and liked the characters even less! Waste of my time and my monthly fee.

This narrator is excellent. One of the best I have heard. I really liked the story as well, and I would actually have given it 4 and a half stars, but you cannot on this program. I found the characters to be so self involved that it began to wear on my nerves just a little. I would not, however, let that personal irritation prevent you from getting this book. It is a great story and well worth the 18 hours.