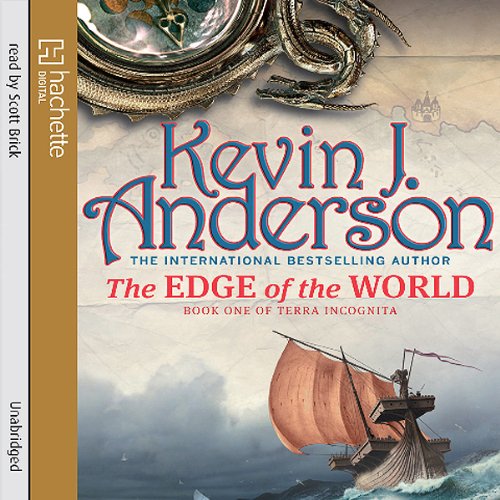 The Edge of the World

In a world of sea monsters, mermaids and lost islands, ghost ships, leviathans and weather witches, only the impetuous, the brave or the mad seek adventure at sea.

After generations of friction, the leaders of two lands meet in the holy city of Ishalem to bring an end to the bloodshed and to divide the world between them.

Sadly, this new spirit of fellowship is shortlived. A single tragic accident destroys, in minutes, the peace that took years to build. The world is once more cast into the fires of war - and this time the flames may burn until nothing remains. From the highest lord to the lowest servant, no man or woman will be unchanged by the conflict.

But while war rages across both continents, a great quest will defy storms and sea serpents to venture beyond the horizon, where no maps exist - to search for a land out of legend. It is a perilous undertaking, but there will always be the impetuous, the brave and the mad who are willing to leave their homes to explore the unknown.

What listeners say about The Edge of the World

Warning - Part of a Trilogy

Warning Audible do not seem to be releasing the second two volumes of this trilogy to customers in the UK. So I cannot recommend it. It is a decent story but what use is one part of of a trilogy

I would agree with the other reviewers - I would say in it's defence that when you stick with it, it does get easier and the story does pan out eventually to a very good one. I think it is the skill of the writer to keep things clear and the listener/reader engaged. Unfortunately, this one is a struggle at this level for at least the first half.

People who have listened to a lot of the Orson Scott Card books will be familiar with the narrator - Scott Brick. Scott can admittedly overdo the emotion sometimes. In relating a pretty innocuous piece of text, he can sound like he is trying to relay it whilst a vice is slowly being tightened around his head.

In the end, I enjoyed this book, with it's interesting characters and plot. The only concern I have, is how much will I remember of it all by the time installment 2 arrives?

This was borderline three/four-star and I have given it the benefit of the doubt!

I didn't enjoy this at all. I found the narrator's style irritating. The story doesn't engage, the characters are hard to like and there are constant mentions of the (fictitious)religions in the story. It is also the first book in a series, which isn't made clear before you buy it.

I didn't enjoy this book.
And The narrator's style...,
I don't know why the narrator tried to read this like it was some kind of a poem, it was tiring.

Really struggling to get into the book. I think it's mainly the narrator who has his own patter & pace that I have found annoying - his reading style feels does not really following what he is reading and it's like he's taking it far too seriously.