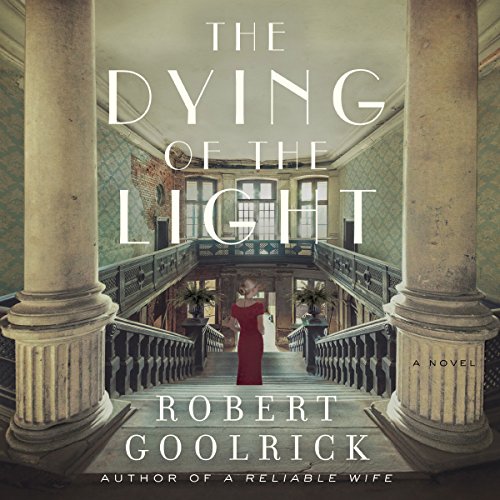 The Dying of the Light

A Novel
By: Robert Goolrick
Narrated by: Kirby Heyborne
Length: 9 hrs and 48 mins
Categories: Fiction, Sagas
5 out of 5 stars 5.0 (1 rating)

The Dying of the Light

From the author of the best-selling A Reliable Wife comes a dramatic, passionate tale of a glamorous Southern debutante who marries for money and ultimately suffers for love - a southern gothic as written by Dominick Dunne.

It begins with a house and ends in ashes...

Diana Cooke was "born with the century" and came of age just after World War I. The daughter of Virginia gentry, she knew early that her parents had only one asset, besides her famous beauty: their stately house, Saratoga, the largest in the commonwealth, which has hosted the crème of society and Hollywood royalty. Though they are land-rich, the Cookes do not have the means to sustain the estate. Without a wealthy husband, Diana will lose the mansion that has been the heart and soul of her family for five generations.

The mysterious Captain Copperton is an outsider with no bloodline but plenty of cash. Seeing the ravishing 19-year-old Diana for the first time, he’s determined to have her. Diana knows that marrying him would make the Cookes solvent and ensure that Saratoga will always be theirs. Yet Copperton is cruel as well as vulgar; while she admires his money, she cannot abide him. Carrying the weight of Saratoga and generations of Cookes on her shoulders, she ultimately succumbs to duty, sacrificing everything, including love.

Luckily for Diana, fate intervenes. Her union with Copperton is brief and gives her a son she adores. But when her handsome, charming Ashton, now grown, returns to Saratoga with his college roommate, the real scandal and tragedy begins.

Reveling in the secrets, mores, and society of 20th-century genteel Southern life, The Dying of the Light is a romance, a melodrama, and a cautionary tale told with the grandeur and sweep of an epic Hollywood classic.

The story itself was OK albeit a bit trashy and borderline Harlequin romance-esque with some homophobic undertones. Where this really became almost unbearable was with the narrator. His voice was just very unpleasant to listen to and over the top. The yelling scenes were particularly awful. I had to constantly adjust the volume because he was just SCREAMING the angry dialogue.

This entire book was told from the perspective of a woman but for some strange twisted reason they selected a man to narrate it. So he struggles to sound like a woman throughout the entire book and it is a huge fail. In addition, he tries to immitate a southern accent that just comes across as whiney

The story ended up being mediocre. All things considered I really didn't like the book. I would return it but I did listen to all of it, so that wouldn't be fair to Audible.

My advice is to definitely listen to the preview before you buy this audiobook.

It was a great "listen".

This was the third "Goodrick" novel that I have listened to on Audible. It was just what I wanted; an engaging tale of southern charm and old money, failing to hold onto it's fading glory. It transported me to that time and place and held my interest not only with the plot but also with the scene that he set.

Disappointing from the start. I kept thinking it would get better, but got worse instead. It tried to be gothic and harlequin romance, but didn't even succeed at either.