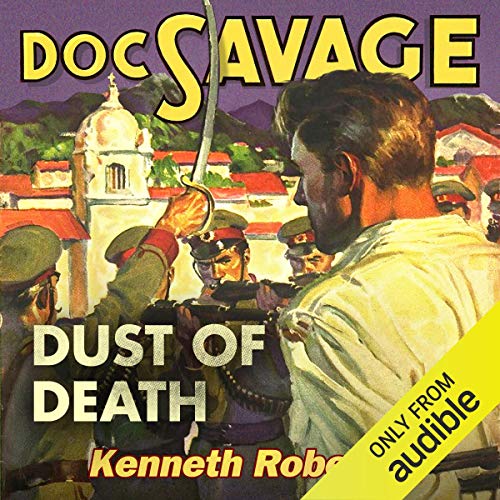 The Dust of Death

By: Kenneth Robeson
Narrated by: Marc Vietor
Try for £0.00

Doc Savage finds himself caught in the middle of two embattled South American republics that have found a new and deadly foe in the form of an evil hooded figure known as the The Inca in Gray. When The Inca deploys a deadly "Dust of Death" to slaughter citizens on both sides of the fighting, Doc Savage and his team rush into the battle to try to save the day and avoid the firing line.

What listeners say about The Dust of Death

Another fine entry in the early adventures of Doc

I originally wondered why this volume was chosen to be adapted to audio book. Now I know... Chemistry! In this adventure, you first meet the strange ape that would become Ham's pet, and the foil to Monk's Habius Corpus. Chemistry was never as popular as Habius, but here you get a chance to see him as he was originally created.

There is also much daring do by Doc, Ham, Monk and Long Tom. A small war. several murders. And of course shadowy cloaked figures who are up to no good.

Will Doc save the day? Of course. But getting there is most of the fun.

Recommended for all Doc Savage fans, and fans of high adventure of the sort found in the old pulps. I enjoyed this a lot.

Very good action story, felt like you're in the story watching the story as it goes. Enjoyed the story from beginning to end.

Introduces a continuing character to the original Doc Savage series, much to Monk's irritation.