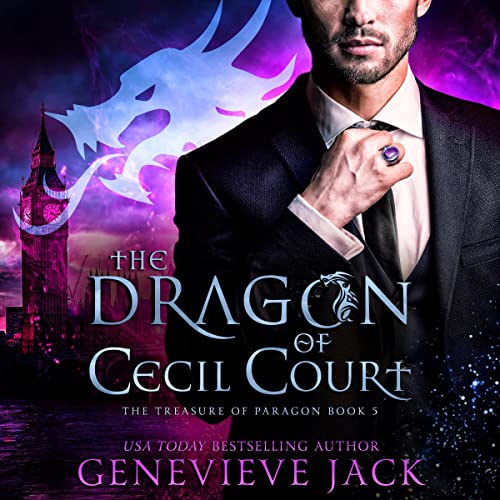 The Dragon of Cecil Court

By: Genevieve Jack
Narrated by: Laura Horowitz
Try for £0.00

He’s only ever had one weakness.

Nathaniel Clarke has a secret. Before he became the owner of an occult bookshop on Bookseller's Row, he was a prince of the kingdom of Paragon. Now the dragon shifter is the high priest of the Order of the Dragon, a society of the most powerful supernatural beings in London. He’s only ever had one weakness, and he hasn’t seen her in a decade.

She’s only ever been good at one thing.

American pop singer Clarissa Black survived by singing on street corners before Nathaniel came into her life and unlocked the latent magic inside her. Despite their passionate affair, she refused Nathaniel’s proposal in order to pursue her music career. Her multiplatinum albums have made her a star, but one with few people she can trust.

One curse will change two lives forever. When Clarissa’s voice fails her during a show in London, it’s an excuse to reconnect with the man who remains her deepest regret. Nathaniel is reluctant to open old wounds, but he can’t refuse Clarissa’s plea for help, or the passion her nearness awakens in him. But as he closes in on breaking the curse, Nathaniel learns the cause of what ails her is tangled with the deadly past he left behind.

What listeners say about The Dragon of Cecil Court

Each book has a separate story of the siblings but the series as a whole is outstanding! I cannot wait for the next audiobook to be released.

So this series has been filled with heroines that are meh, however this heroine is awful!!! I thought Raven and Sabrina were a little on the selfish side, but Clarissa is the most self-centered heroine character I have ever read. If it weren't for the fact that I enjoy the story of Paragon and I don't think you can skip a book in this series without missing important information, I wouldn't finish it. I listened to it at 1.5x speed just to get through the awfulness of their relationship faster. Honestly, it would have been a better story if they had work to sever the tether they have and he could mate with ANYONE else.