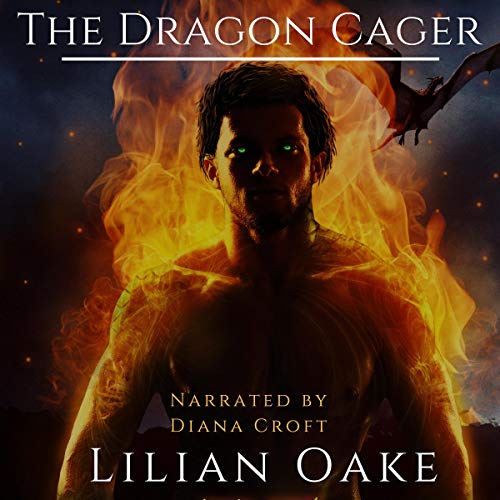 Since her father's sudden death, all Evie wants is comfort and security for her family, especially from dragon cagers. The two-tongued serpents are said to take the shape of a man, woo their ill-fated victims, and then devour them whole. But no one ever told Evie she could be kindred to the creatures.

When Evie is framed and exiled, a cager called Lachlann discovers her roaming in the barren dragon country. Now, while being hunted by the same slayers seeking his magic-imbued heart, Evie must put her trust in Lachlann and seek out his clan for help. Only then will they discover what ancient blood flows through her veins.

Diana Croft brings every story to life with her incredible, dramatic narration and brilliant characters

This was the first audio book that I'd ever heard, and I was a bit concerned that having just one narrator would make the experience a bit boring. How wrong I was! Diana Croft brought such a range of accents and tones to the characters' voices that I soon forgot that there was just one narrator and relaxed fully into the story. The overall story was absorbing and well-crafted but there were a few 'clunky' phrases that irritated. However, as a first experience it was absolutely brilliant and certainly encouraged me to try more audio books.

This was a brilliant story from start to finish, I only wish there’d been more of it!

I loved Evie as a main character, she was the perfect blend of naïve and cynical – she’s obviously and understandably distressed when her world is turned upside down but she adapts to her situation at a convincing pace.

Lachlann is one of my all time favourite heroes. He’s kind, persistent without being icky and doesn’t take himself too seriously. There were some scenes with him that made me genuinely laugh out loud.

I would have liked Evie to have spent some more time being angry about her situation and then more focus on her near the end.
I listened to the audiobook version of this title, as narrated by Diana Croft, who can honestly do no wrong. She’s the most versatile narrator in terms of accents that I’ve ever listened too. She brings the characters to life and nails the Scottish accent!

If you’re looking for a satisfying and romantic story, with dragons and magic, then this is the book for you.

Phenomenal storytelling and world-building by Lilian Oake. I'm immensely impressed by this dragon-shifter fantasy romance. The plot is rich and engaging with love, action, and an unexpected twist. The characters are complex and intriguing; I was enthralled from start to end. The ending is wrapped up a bit hastily, I wish there was more of an expansion.

Diana Croft does a fantastic job with the narration. She made the characters real, and I liked her Scottish accent. I look forward to additional Dragon Cager books by Lilian Oake. I was given a free copy of this audiobook at my request and have voluntarily left this review.

A dragon with a heart.

Overall I enjoyed this book. Diana Croft is an excellent narrator and I will look for other books she has done. The Dragon Cager has a good world building base from which many books can come from. I wish more time was spent on Evies family and the ending was a bit abrupt for me. This is still a good story told well and worth listing to. This book was given to me for free at my request and I provided this voluntary review.

All is not what it seems

I listened to this on audible and liked listening to this narrator. I believe that she does a good job.
Dragon Cagers are actually dragon shifters. Evie is cast out of her village under bizarre circumstances. She is found freezing and with a fever by Lachlann who just happens to be a cager.
She soon discovers that her heritage isn't what she believes. Dragon hunters and druids play a part in this story.
The story progressed slowly as Lachlann wastes time so that she can get to know him and drop her prejudices against cagers.
The ending was wrapped up too fast in my opinion compared to the rest of the book.


There is a part where a suicide happens that seems out of the blue and added nothing to the story. I really dont understand why it is included.

I received a free audible copy and chose to leave a review.

This book is full of surprises, intrigue, drama, and will keep you listening to the very end. I couldn't put it down!

I would recommend thos book to anyone who enjoys fantasy, romance, and humor.

The narration was impeccable and enjoyable and I hope to see more in the future! I would be more than willing to buy the next one if there is one.

*I received a free copy of this book in exchange for an unbiased review.*

This is a dragon changer fantasy. The characters and plot are well developed. The action that takes place is mostly psychological but has some exciting physical action. The story line is unique but not new. Evie is a young girl who thinks she is human. During the story she discovers who she really is. This is also a love story and we follow this development throughout the story.

The narrator does an awesome job of reading and using Scottish dialect when appropriate. A great book to listen.

the story was good but I often found myself asking why the characters were engaging in actions that seemed outside of their established character.

The Dragon Cager by Lilian Oake and narrated by Diana Croft is a book I received free from the author and the review is voluntary. I didn't have a blurb to go by and went into this book blind. The cover and title lured me in! I am so glad it did! I was so hooked right away I stayed up late into the night to finish it! I just couldn't stop! I had to know more! Ms Oake, you must make book 2! There is a girl cast out of the village. It wouldn't be so bad but the forest has creatures of nightmares! The weather is freezing too! There are dragons and dragon cagers! Dragon cagers, according to village, eat people! One caged finds our girl because he has been stalking her. The story really starts there! Why has he been stalking her, what happens next, why did they lie and kick her out of the village, who is she, who is this cager and why is he nice to her, where is her family now, and more! Lots of action, surprise, and a touch of romance. Loved it! I am definitely reading more by this author. I looked and I have another book and plan to dive into it soon! Hope it is as good as this one!
This book is going in my favorite folder!
The narration was excellent! Just the perfect voice for the setting and she performed all voices perfectly!

Great story! Action starts immediately and doesn't let up! Evie's evolution throughout the story shows just how wrong first impressions can be.

Fun dragon romance book. well written. Narrator was incredible. The romance is the core for the story, but the action doesn't feel like an afterthought.