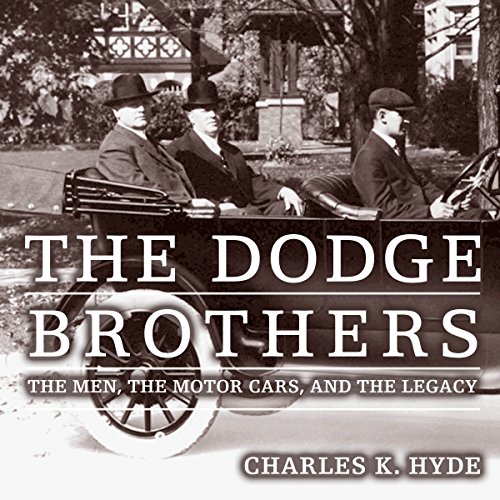 The Dodge Brothers: The Men, the Motor Cars, and the Legacy

At the start of the Ford Motor Company in 1903, the Dodge Brothers supplied nearly every car part needed by the up-and-coming auto giant. After 15 years of operating a successful automotive supplier company, much to Ford's advantage, John and Horace Dodge again changed the face of the automotive market in 1914 by introducing their own car. The Dodge Brothers automobile carried on their names even after their untimely deaths in 1920, with the company then remaining in the hands of their widows until its sale in 1925 to New York bankers and subsequent purchase in 1928 by Walter Chrysler.

Charles K. Hyde's book The Dodge Brothers: The Men, the Motor Cars, and the Legacy is the first scholarly study of the Dodge brothers and their company, chronicling their lives - from their childhood in Niles, Michigan, to their long years of learning the machinist's trade in Battle Creek, Port Huron, Detroit, and Windsor, Ontario - and examining their influence on automotive manufacturing and marketing trends in the early part of the 20th century.

"Thoroughly researched, the focus is squarely on the men, their contributions, and the legacy they have given to the auto world" ( Old Cars Magazine)
"True, the Dodge brothers and their company were historically important because of their contributions to the rise of Ford and then Chrysler. But Hyde makes it clear that the Dodge brothers were very important manufacturers in their own right. [Hyde] has written the definitive history of both the men and their firm." (Larry D. Lankton, Michigan Technological University)
"The critical importance of John and Horace Dodge, from their childhood in Niles to their company's merger with the Chrysler Corporation in 1928, is illustrated in this well-researched automotive history." ( Heritage Newspapers)

What listeners say about The Dodge Brothers: The Men, the Motor Cars, and the Legacy

Worth it for Auto Historians...

Incredible story of storied automakers long forgotten by modern society. This audiobook provides a great look into the two men that created a brand that is still loved to this day. Very few publications focus on these two which is a tragic shame, so this audiobook is one if the only you can find on the specific topic.

The author wrote this book in more of a documentary / historical reference style citing many "dry" facts and figures from ledger's and legal documents. I, personally, appreciate this as you can more easily fact check and look these documents up for yourself being you know many of the sources (which the author often freely provides). To some however this leads to a bit of a dry, boring, lackluster read / listen.

If you are truly interested in these two men (Jon & Horace Dodge), the history of the early automotive industry in America, or simply want greater knowledge on this storied automaker you should DEFINITELY stick through it and listen the whole way through!!!

interesting book I learned a lot from this book

good book it kept me interested. all the way through. I learned a lot of the Dodge Bros.

Good info on the Dodge brothers

Starts out slow - to many dates and details take away from the story. Gets better towards the end. The author must be an engineer. Anyway important anthology of the Dodge brothers

Fascinating history with lots of facts

This was a great book, especially for an automotive history lover, with lots of great detail and insight.

Lots of info., but poorly written.

The author gave alot of dates, facts and figures. However they were presented in such a rote fashion with little accompanying description or discussion that the data overwhelmed the story.

An Enjoyable Look Into Automobile History

I would recommend this book to car enthusiasts everywhere! I learned a lot about the history of Dodge cars, as well as Chrysler, DeSoto, Packard, Ford, General Motors, and more.

What was one of the most memorable moments of The Dodge Brothers: The Men, the Motor Cars, and the Legacy?

The part that sticks in my mind is how the two Dodge brothers died in a short time frame. The brothers were very close, and they left this world close together, too.

I listened to this book as an audio book over a period of several weeks while I was walking outside.