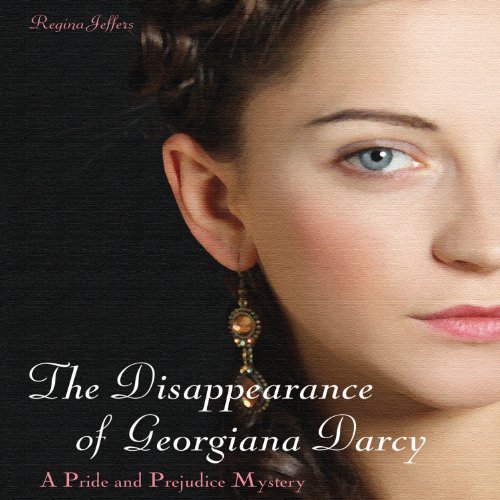 The Disappearance of Georgiana Darcy

By: Regina Jeffers
Narrated by: Ruth Urquhart
Try for £0.00

Shackled in the dungeon of a macabre castle with no recollection of her past, a young woman finds herself falling in love with her captor - the estate’s master. Trusting him before she regains her memory and unravels the castle’s wicked truths would be a catastrophe.

Far away at Pemberley, the Darcys happily gather to celebrate the marriage of Kitty Bennet. But a dark cloud sweeps through the festivities: Georgiana has disappeared without a trace. Upon receiving word of his sister’s likely demise, Darcy and his wife, Elizabeth, set off across the English countryside, seeking answers in the unfamiliar and menacing Scottish moors.

How can Darcy keep his sister safe from the most sinister threat she has ever faced when he doesn’t even know if she’s alive? True to Austen’s style and rife with malicious villains, dramatic revelations and heroic gestures, this suspense-packed mystery places Darcy and Elizabeth in the most harrowing situation they have ever faced finding Georgiana before it’s too late.

What listeners say about The Disappearance of Georgiana Darcy

Regina Jeffers is a fab author

Absolutely love her books but this narrator totally let it down. Her terrible pronunciation of some very basic British words was jarring. Viscount/viscountess and heinous were said several times in the book and never pronounced correctly.

The story is amazing but I think I'm lucky I read the print version first.

Yes, because of the story line. It is exciting and full of different characters.

I was so disappointed by the performance. Ruth Urquhart's delivery was mostly flat and very little light and shade. Her Scottish accent was fine, but her interpretation of the males was harsh.

Do you think The Disappearance of Georgiana Darcy needs a follow-up book? Why or why not?

I am always happy to try Pride and Prejudice follow up books.

I feel most of the problem was down to the producer. There is a long list of mispronunciations that really jarred. Viscount is not pronounced Visscount, it is Veycount. Edward tells Georgiana that he is bless-ed to have her as his wife when it should have been bless'd, and the list goes on. Surely the actress and/or the producer should have noticed these. I spent time listening out for errors than enjoying the story (at times).

Previous Regina Jeffers books have been a delight, so can I suggest that you are more careful about choosing narrators to suit the book? Listen to those narrated by Phyillida Nash as an example of how to read a book not only accurately but also with artistry.

If you're a fan of Pride & Prejudice (and who isn't), you will enjoy this audio book for what it is. Just don't look or listen too closely to the way the narration is edited. There are no pauses between scenes, making it difficult sometimes to tell who the character is that's being narrated. It also is jerky, in that you're first one place, then another, without any pause or even breath between the scenes. The narrator did well, but I suppose both the direction and the editing were rubbish.

I could not finish this book because the narration was terrible. The monotone voice was such a distraction that I couldn't focus on the content.

Would you try another book from Regina Jeffers and/or Ruth Urquhart?

Not the author. Ever. The narration, however, was excellent.

Has The Disappearance of Georgiana Darcy turned you off from other books in this genre?

Partially. I will certainly be more careful.

Early in the story it is enticing to see our favorite Austen characters and read about more of their life. But it quickly fell apart.

Disappointment and frustration. Could not even finish it.

I had several problems with this book. The characters changed in ways I do not believe possible, Mr. Bennet took responsibility for his family's actions, Mrs. Bennet decided she did not like officers after all, they allowed their daughter to be exiled with a vicious, wife beating Wickham. And the repeated introductions of prayer, long pages on the importance of the clergy, quotes from the Bible and scripture and everyone praying for everyone all the time, all the prayers written out for the reader. Not awful if you like to read Christian Romances, but I do not and it was not mentioned in the description. And simply never present in Jane Austen's books. Repeated quoted passages from the Austen books did not help me believe this had anything to do with Austen. Plot was silly, convoluted and unrealistic. Trash.

Very good read, however narrator terrible. !!!! I hope there is a part 3 better narrator of course !