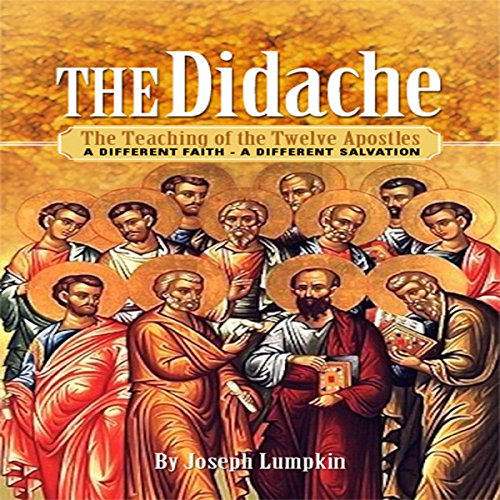 The Didache: The Teaching of the Twelve Apostles

By: Joseph B. Lumpkin
Narrated by: Tom Prodehl
Try for £0.00

What form did Christianity take in the first 30 years? Before the Jewish Christians were slaughtered by Rome and before the emergence of the Pauline sect, while the faith was still under the guiding hand of James, the brother of Jesus, what did the pure and unaltered church look like?

By examining the Didache, the "Q" document, and the book of James we will look back into the first years of the faith. The difference between the beliefs of the apostles and modern Christianity will astonish you. The Didache is a manual written by the early Christians, a break away sect of Judaism, instructing converts on how to be Christians and how to conduct themselves in daily life. It is a magnificent view of the beliefs and rituals of the earliest form of Christianity as propagated by those who knew Jesus best; his brother and the original apostles.

By the time of the Roman massacre of the Jews (66 C.E. - 70 C.E.) there were three major division in early Christianity: the original Jewish Christians, the gnostic Christians, and the quickly growing Pauline sect that was breaking away from its more formal Jewish roots.

There was a one in three chance of the Pauline sect becoming the template of the Christianity of today. Had the war between the Romans and Jews not happened or had Paul failed to convert enough gentiles to his sect to outnumber those who followed James we could have a Messianic Jewish-based Christianity today. Our canon and our worship would be different, but because it would have been accepted, orthodox, and traditional, Christians would follow it as they follow the Pauline sect now. It is only by chance, or by the hand of god that the Didache is not the main document of catechism in the church today.

What listeners say about The Didache: The Teaching of the Twelve Apostles

The Didache itself is interesting to hear, but that’s only a small percentage of the content. The introduction/foreword chapters are an authors opinion: interesting and insightful, but some will agree on certain points more than others.
The Letter of James is also included.
The narrator struggles with some words and mis-speaks from time to time. His style does not demonstrate comprehension of the text.