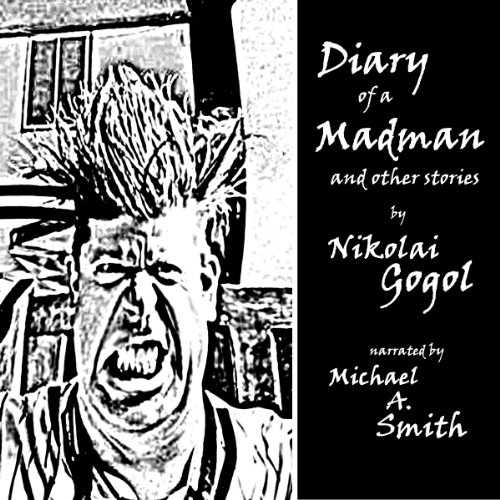 The Diary of a Madman and Other Stories

By: Nikolai Gogol
Narrated by: Michael A. Smith
Try for £0.00

Some call him a Russian Mark Twain. And with his special blend of comedy, social commentary, and fantasy, Nikolai Gogol paved the way for his countrymen Tolstoy and Dostoyevsky. This sampling of Gogol's works includes the increasingly fantastic entries of The Diary of a Madman followed by the wonderfully surrealistic The Nose in which the title character embarks on some unlikely activities when separated from its owner's face. Rounding out the collection are the woefully comic tale of a clerk's acquisition of The Overcoat and Ivan Fyodorovich and his Aunt, in which the title character retires to his country estate, managed by a wily Aunt.

This is the first audible title I have been disappointed with. I have been making a survey of the great Russian writers, and assumed that the level of quality in narration that is given to Dostoevsky and Tolstoy would be present in Gogol as well.
Unfortunately this is not the case. Mr. Smith's narration maintains an infuriatingly predictable cadence, in which over-emphasized adjectives create a lilting, contrived monologue reminiscent of an enthusiastic child reciting lines in a school play.
Smith's consistent tone of bracing irritability throughout the production seems entirely tone-deaf, undermining Gogol's ironic subtleties, not to mention his use of grotesque slapstick and surrealism. All of the joy of Gogol's writing is lost due to Smith's grating delivery, which aggravatingly becomes the central focus, rather than the actual text.
The pronunciation of Russian names is also sub-par at best.
This is a good example of getting what you pay for - I thought I was getting a great deal on some classic Russian literature, but the listening turned out to be an entirely frustrating experience.
Lesson learned: always listen before you buy.