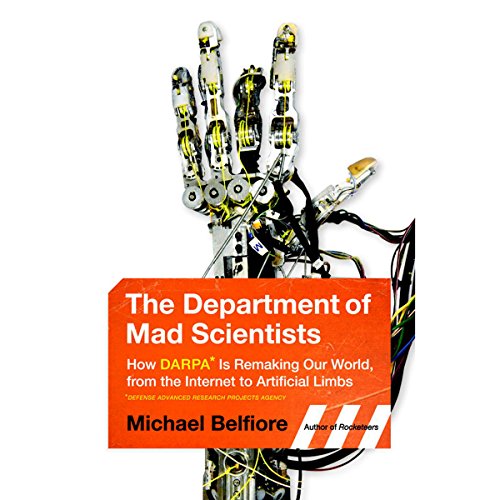 The Department of Mad Scientists

The first-ever inside look at DARPA - the Defense Advanced Research Projects Agency - the maverick and controversial group whose futuristic work has had amazing civilian and military applications, from the Internet to GPS to driverless cars

America's greatest idea factory isn't Bell Labs, Silicon Valley, or MIT's Media Lab. It's the secretive, Pentagon-led agency known as DARPA. Founded by Eisenhower in response to Sputnik and the Soviet space program, DARPA mixes military officers with sneaker-wearing scientists, seeking paradigm-shifting ideas in varied fields - from energy, robotics, and rockets to peopleless operating rooms, driverless cars, and planes that can fly halfway around the world in just hours. DARPA gave birth to the Internet, GPS, and mind-controlled robotic arms. Its geniuses define future technology for the military and the rest of us.

Michael Belfiore was given unprecedented access to write this first-ever popular account of DARPA. Visiting research sites across the country, he watched scientists in action and talked to the creative, fearlessly ambitious visionaries working for and with DARPA. Much of DARPA's work is classified, and this book is full of material that has barely been reported in the general media. In fact, DARPA estimates that only 2 percent of Americans know much of anything about the agency. This fascinating read demonstrates that DARPA isn't so much frightening as it is inspiring - it is our future.

What listeners say about The Department of Mad Scientists

This is an outstanding book on the nature and past projects of DARPA. Thankfully it goes far beyond the tired "DARPA created the Internet" and spends the bulk of its time on much more interesting and more recent projects.

Hi energy story about the genesis and activities of DARPA. Just shows you how effective an organization can be when the people involved are so very interested in finding creative ways to solve problems and to seize opportunities.

Good Read, but too much depth - not enough breadth

I picked this book up after hearning the author interviewed on the Jim Bohanan Show.

First of all - I liked the book - there was a lot of interesting history about how the internet was invented and conceived by DARPA, as well as GPS and other "game-changing" technologies. The book also had a lot of information on DARPA's origins.

The second section of the book dealt with things that DARPA is currently working on, but mainly the things that could have as huge an impact as the internet or GPS. They discuss robotic surgery, automated driving, biofuels and solar energy for example.

The issue that I had with the book it that it seemed (to me) to go into way too much detail about the current research, and left out other things that might have been very interesting, due to the depth of coverage, that at times, drug on and on. I personally (and other readers may differ) would have preferred less "in depth" coverage and more examples of things being researched.

A geeks idea of great reading

Yes, I am a geek and yes this book satisfies my tech itch completely. I have always wanted to work for NASA because I thought they were at the cutting edge of physics and science&#8230; but now I want to work for DARPA!
This book tells just enough about the history of the technology we use everyday, as well as those we will use tomorrow. Great listen!

The internet was originally the ARPA-net. America's most under-appreciated agency has transformed our lives in many different ways and areas and will continue to do so. This is one government department whose budget should never be cut. Read this book to find out why.

A few slices of insight on program management & leadership are buried deep under a pile of self-indulgent hero worship & uncritical analysis.

This is popcorn listening. I want to call it the equivalent of a episode of oprah. It takes a sexy topic and shines absolutely no light on it. I managed to trundle through the entire program, but I don't feel any better for crossing the finish line.

Love it! Always a fan of the author reading his own work - and Michael does a great job. His love for his work and his enthusiasm for the subject shines through. This is a great listen for all techno-geeks like myself. If only he could have gotten behind the locked doors!!! Five stars!

This book is filled with unbelievable "no way!" information about what really goes on at DARPA. Author Michael Balfiore writes for 'Wired' and the book has a techno-lyrical style that is at once appealing and coma-inducing. As much as I wanted to listen, I kept falling asleep. Maybe it was the narrator. Oh....

Great listen - a postive message about government and hope for the future.

I wish all aspects of government were as efficient

First, thank you James Rollins. I had never heard of DARPA until the Sigma Force series. OK, what they have done. I had no idea an agency could give the world all that they have and with no fanfare, brass bands or their own dedicated 24 hour news station. The last chapter describing what is just over the horizon made me feel better about the future than I have in a long time. There are people, dedicated, talented, creative and industrious working hard and long (at least as long as their term limits allow) to make leaps forward, that one small step for man to borrow a phrase.