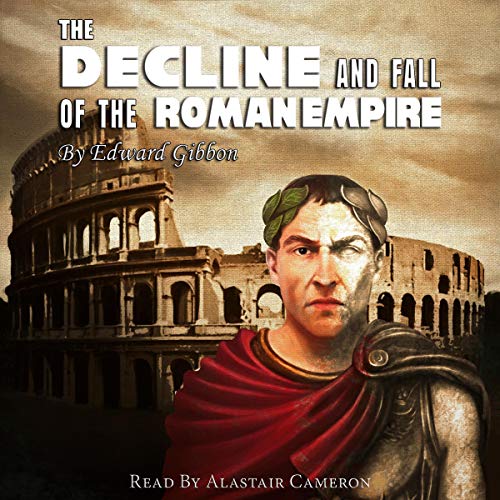 The Decline and Fall of the Roman Empire

By: Edward Gibbon
Narrated by: Alastair Cameron
Try for £0.00

This is the complete and unabridged collection of all six volumes from The Decline and Fall of the Roman Empire.

The Decline and Fall of the Roman Empire by Edward Gibbon (an English historian) is a six-volume collection that examines the fate of one of the most renowned civilizations in history, the Roman Empire. This historical account by Gibbon is widely considered by many as one of the greatest works of history ever written. In this masterpiece, Gibbon covers the time periods from the second century A.D. to the 15th century, and takes a look at the history of early Christianity along with the Roman State church, the history of Europe and the Middle East along with the rise of Islam, and the events that lead to the collapse of the Roman Empire among many other historical events.

I understand pronunciation of some words have changed since Gibbon's time, but the narrator simply got the names of the early Muslim caliphates wrong. There were a number of others. Granted, it is a very long work, some errors are to be expected, but these were consistently wrong.

For those who are aficionados of history, this book is highly recommended. Although it is over 100 hours long, Gibbon's masterpiece will truly captivate you. The narration was also a delight to listen to.

This was a wonderful performance by Mr. Cameron on a literary masterpiece about the Roman Empire. For those that love history, this book is a must as it takes a very in depth look at the Roman Empire and how it fell. Throughout the book, Gibbon doesn't take any great measures to hide his biases with the choice of language and vantage point of the story telling.

Overall, I'm glad to have listened to this book. It was quite long, but the combination of Gibbon's writing and the narration was a great combination that kept me intrigued.