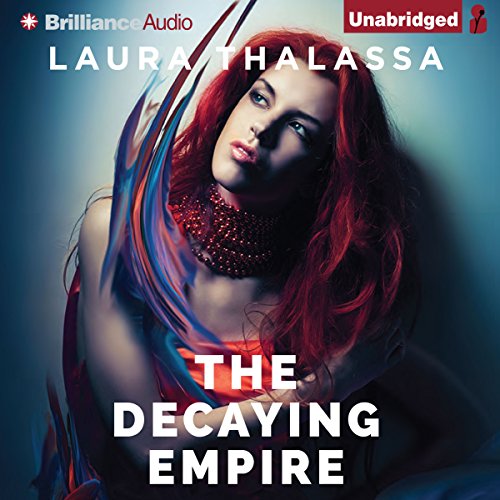 By: Laura Thalassa
Narrated by: Rachel Vivette
Try for £0.00

When eighteen-year-old teleporter Ember Pierce wakes up in a Los Angeles hospital, she remembers only the basics: she's been trained by the government as a spy, she's sent on dangerous missions, and her last assignment - the one that landed her in the hospital - was a setup.

Caden Hawthorne has spent the past ten months of his life grieving Ember's death. So when she shows up in his room like an apparition, he can't believe his eyes. But this Ember is different. Her hair is longer, her skin is paler, her gaze is haunted. She tells him what he's already begun to suspect: someone he trusted betrayed her.

Now, uncertain who is friend and who is foe, Ember and Caden face the toughest mission of their lives - to stay together and survive, as they run from danger toward an unknown future.

What listeners say about The Decaying Empire

The Vanishing Girl saw Ember discover the truth about The Prometheus Project and come to realise the extent of the insidious machinations of the government she worked for. To silence her, Dane Richards set her up to fail her next mission which resulted in her being spliced and succumbing to a medically induced coma.

Ten months later, a grieving Caden having been told that Ember was dead, has been slowly going off the rails. Richards realises that Ember is the key to keeping him in line and arranges for her to be revived.

Ember is appalled when she learns she’s been comatose for ten months and resolves to escape and expose those responsible for what they did to her. With Adrian’s help, Ember and Caden finally spy their chance to abscond but can Adrian be trusted?

The Decaying Empire is the second engaging instalment of the Vanishing Girl series and picks up immediately after the events of its predecessor. Ember and Caden really go through the wringer in this one. Each challenge brings them closer together as a couple and one can’t help rooting for them. I felt that the book benefited from Caden’s point of view as opposed to only Embers. Caden is his usual charming irrepressible self. Ember is the snarky, intelligent and impulsive heroine of the first book. Her near death experience has left her jaded somewhat and her desire for vengeance motivates a lot of her actions.

I’m glad that the author chose to expand on the secondary characters, in particular Ember’s fellow teleporters. This gave the reader a wider scope into the effects of the project on the lives of those affected.

The pacing was great, and the action scenes were well done. One of the things that has puzzled me throughout the series has been the identity of the person controlling Ember’s ‘side’ missions. I have a feeling that this person will play a key part in bringing the organisation down. I look forward to reading how Ember and Caden will set about doing this. Unfortunately there’s been a significant delay in the release of the third instalment so I’m not sure when this will be.

I listened to this version on Audible and was once again impressed by Rachel Vivette’s clear and concise narration. She has definitely become one of my favourite narrators.

I struggled to finish this book due to Cayden calling Ember "Angel" every time he talked to her. I turned it off a few times due to my annoyance with the Angel calling. I get it the nickname but over used to the power of 10. At one point, I made a drinking game of every time he called Angel, I would drink. I don't suggest playing longer than a chapter or you'll be hungover.

I frickin LOVED these 2 books!
PUHHHPUHHHPLEEEAAASSSE do at least one more book. JUST to wrap it up. I dont care if its cut short. Just some closure. I'm dying from my worst nightmare... an unfinished cliffhanger!
😭😭😭

Where is the last book?

Come on already! I hate being left out in the dust . I ve6much enjoyed the first two books, this needs a finish, or the very least another book to extend the seriers.

Man, can they get a stinkin break already!?!? Lol. Plenty of action throughout with some very steamy scenes between them and language but not as bad as some books can be. Left on a cliffhanger and of course, I just knew that that certain someone would be the traitor!!

So many broken noses. Ember and Caden are on a mission to escape the project. So crazy.

The audio didn't work past the first half of chapter 1!!! Couldn't finish the book....

Loved it! easy to listen. never wanted to stop. it was way better then the Hunger games

What a fantastic series.

I loved book one and as soon as I finished, I ran to get book two. It did not disappoint.
This is an amazing book. It has it all. Action, romance, funny dialogue and characters you love. I wish book 3 was out already. But I have to wait until the summer.