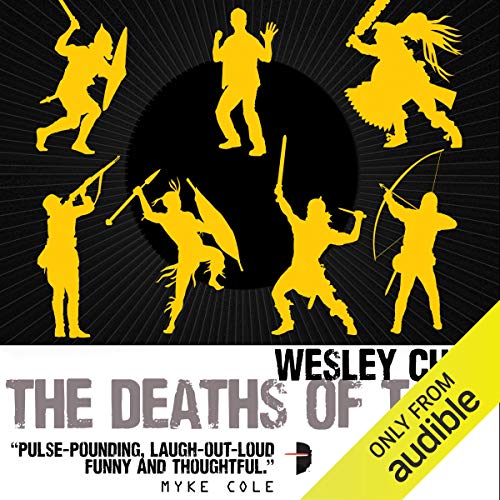 The Deaths of Tao

By: Wesley Chu
Narrated by: Mikael Naramore
Try for £0.00

The sequel to The Lives of Tao. The Prophus and the Gengix are at war. For centuries they have sought a way off-planet, guiding humanity's social and technological development to the stage where space travel is possible. The end is now in sight, and both factions have plans to leave the Earth, but the Gengix method will mean the destruction of the human race. That's a price they're willing to pay. It's up to Roen and Tao to save the world. Oh, dear...

Wesley Chu was born in Taiwan and immigrated to Chicago, Illinois when he was just a pup. Wesley is an avid gamer and a contributing writer for the magazine Famous Monsters of Filmland. A former stunt man and a member of the SAG, he can also be seen in film and television playing roles such as “Banzai Chef” in Fred Claus and putting out Oscar worthy performances as a bank teller in Chicago Blackhawks commercials. Besides working as an Associate Vice President at a bank, he spends his time writing and hanging out with his wife Paula Kim and their Airedale Terrier, Eva.

What listeners say about The Deaths of Tao

Good but the first one was better.

Was a little long and drawn out for me, though this is maybe to set it up for the last book in this trilogy.

I can't tell you how much I enjoy these books!

Some of the accents are a bit off but that is the only negative thing I have - Mikael Naramore does a great job and really bring the story to life! Totally absorbing and another great book from Mr Chu - can't wait to start the final book!

Ok, here's the deal. I loved the first book. It was something fresh and humorous. I'm not sure why, but this one didn't catch me in the beginning. I didn't like how it started out with the main characters, kind being split up emotionally. I found the bickering banter a bit annoying. Setting that aside, I powered through, trusting it would get better. It did, but still just didn't live up to what I was hoping for. I still give it 4 stars overall because the performance was, once again, very solid, and because the premise of the series is still strong. I will get book 3.

Not quite as fun as the first book

The Deaths of Tao is the second book in Wesley Chu’s TAO series. In the first book, The Lives of Tao, we met Roen Tan, an overweight lazy guy who, because he was in the wrong place at the wrong time, was possessed by an alien named Tao. There are two factions of aliens on Earth — the Prophus and the Genjix. They crash-landed on our planet thousands of years ago and they’re trying to get back to their own planet. They exist only as spirits and must inhabit human bodies if they want to get anything done.

Both the Prophus and the Genjix have been guiding humanity’s technological and cultural development for millennia — all with the goal of eventually developing spacecraft to take them back to their planet — but the two factions have different methodologies. Tao is one of the Prophus, the nice aliens who care about what happens to their human hosts and are trying to build up a benevolent human civilization. The Genjix, in contrast, have a Machiavellian approach — they just want to get off Earth as fast as possible and are willing to do whatever it takes to make that happen. They’re responsible for war, dirty politics, global warming, and other evils.

The Deaths of Tao begins a few years after the events of The Lives of Tao. Roen has been traveling all over the world, basically as a spy, trying to figure out what dastardly deeds the Genjix are up to. Something big is about to happen and he hopes to discover what it is so the Prophus can stop it. All of the spying has taken a toll on his marriage. He and Jill, who was inhabited by a Prophus alien at the end of The Lives of Tao, have separated and their son Cameron lives with Jill’s parents because Jill works in Washington D.C. as a congressional aide, trying to block any plans the Genjix try to get through the U.S. congress. Roen laments his broken marriage and orphaned son, but if the Genjix aren’t stopped, the entire human race is in danger. When Roen discovers what the Genjix are doing, he leads a team to try to foil their plans while Jill tries to obstruct their efforts by working the political side.

The plot advances significantly and there are rooftop chases, gun fights, grenades, hand to hand combat, torture, and plenty of other exciting action in The Deaths of Tao. It would make a fun movie. There were more than a few times when I thought characters did really dumb things, or when I thought some event was implausible or inconsistent, or when characters were wisecracking when screaming seemed more appropriate. It’s clear that Wesley Chu’s goal is to entertain us in superhero fashion. He’s not worried about being completely realistic, so there’s a little bit of plot sloppiness that you’ll need to be willing to overlook. Such as when a bullet grazes Jill’s thigh and she ties it off with a handkerchief and goes for margaritas. Or when Roen, an IT technician and computer geek, hides the earth-crushing information stored on his computer with a silly low-security password.

More problematic for me was that this story was told from multiple perspectives — including Jill and the aliens on both sides — and all those other voices are not done as well as Roen’s is. Roen’s transition from a slob to a successful secret agent in The Lives of Tao was humorous and fun. Jill’s meetings with U.S. senators and phone calls to her worried parents are not. Jill does some training with a handsome male agent in this book, but we’ve seen all that before and she’s just not as appealing as Roen is. Also, because this story starts after Roen and Jill have had a son and are broken up, I felt like I missed a lot of potentially interesting material, some of which probably would have made me understand and care more about Jill and Cameron.

Readers who are most interested in the war between the alien sects will probably be pleased with The Deaths of Tao — that part of the plot moves rapidly and there are significant occurrences and a major cliffhanger at the end. Readers who loved The Lives of Tao mainly for its humor, tone, premise, the fun of watching Roen develop, and the gradual understanding of the alien presence on Earth, may be slightly disappointed in The Deaths of Tao. Chu continues to give us plenty of examples of how the aliens have influenced human history, but now that the premise is no longer novel, these details are just not as cool as they were in the first book.

I continue to listen to Audible Studio’s version of the TAO series which is nicely narrated by Mikael Naramore.

Another fun ride with Roan and the Quasing. ‘The Deaths of Tao’ is full of non-stop action with a bit of humor and some well thought out writing mixed in. There are parts where I was laughing out loud right after holding my breath during a fight scene. The plot is interesting and well thought out I couldn’t get enough. On to book 3 in the series!

The narrator does a good job bringing the story to life!

continues couple of years after the first book ends . drags a little in middle but picks up toward the end, anyone who says this book doesn't progress the story is lying there were two developments that moved the story forward. Can't say which once so as not to spoil the story . recommend to anyone seeking a solid trilogy good narration was better on the last book but still solid.

this book ends on act 2. That's the big problem.

It's enjoyable but I ended it with a sour taste in my mouth because I felt cheated, like the book didn't end. I totally get that trilogies are a big story, but each book should have a middle beginning and end. This book it's just a hook for book 3. Not cool.

Has The Deaths of Tao turned you off from other books in this genre?

Yes, from reading the next book of this trilogy.

What does Mikael Naramore bring to the story that you wouldn’t experience if you just read the book?

He's a great performer. I honestly think it's better to listen to the book than read it because of him. I don't think my brain could put the life into characters that he does.

If you could sum up The Deaths of Tao in three words, what would they be?

What other book might you compare The Deaths of Tao to and why?

Made me feel good.