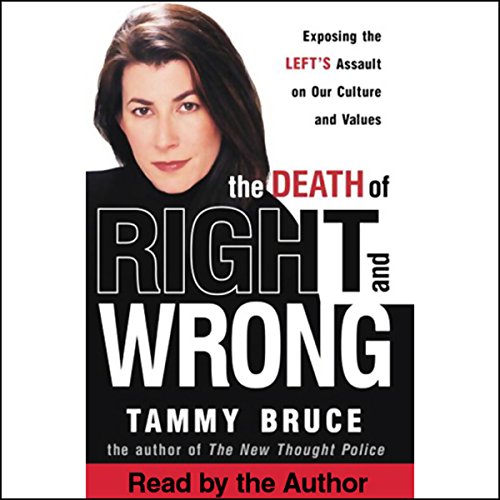 Exposing the Left's Assault on Our Culture and Values
By: Tammy Bruce
Narrated by: Tammy Bruce
Length: 6 hrs and 3 mins
Categories: Non-fiction, Politics
1 out of 5 stars 1.0 (1 rating)

If you believe children should be seduced into warped sexual behavior by the Gay Elite, if you think confessed murderers should be set free by defense attorneys who know how to wield the race card, if you feel promiscuous gay men should be empowered to spread AIDS and other sexually transmitted diseases, don't read this book.

But if you've always suspected that factions on the Left are trying to destroy the values that define our civilization, this book proves it. Through The Death of Right and Wrong, author, activist, and pundit Tammy Bruce takes you inside the chilling world of the Left - a place where morals and decency have been turned on their heads and the crisp distinction between Right and Wrong has been blurred into a mushy, gray mess.

Ms. Bruce smashes the facades of "Tolerance," "Understanding," and other Leftist slogans to reveal the ugly truth of their agenda. As a gay activist and former president of the Los Angeles chapter of the National Organization of Women, she witnessed firsthand the Left's attempts to undermine our millennia-old code of morals and values, aided by politically biased media and academia. And if the news headlines of today are any indication, they're winning the culture war. Unless we act now, we are doomed at the hands of special interest groups on the Left who want nothing more that to undermine our ability to judge right from wrong in order to foist their own selfish, anything-goes society on the rest of us. This book reveals what they're doing, how they're doing it, and what we can do to restore decency in our society.

You'll discover powerful tools to help you understand the psychology of the Left - what makes them tick, and, more importantly, how to stop them from eroding our values completely. Full of controversial opinions and countless examples ripped from the headlines, The Death of Right and Wrong is a powerful, eye-opening book that you won't want to be without.

In my opinion this is homophobic twaddle of the most ignorant kind. Everyone would go rightfully crazy if this site published racist or ant-semitic books, but somehow it is always OK to publicise prejudice against Lesbians and Gay men. Disgusting.

I am a long-time admirer of Ms. Bruce. I cancelled my membership in NOW when I realized that they were not an organization out to help women, but to defend the icons and special interests of the left--even if doing so destroyed a woman's life or reputation. Ms. Bruce has confirmed this to be a fact through her various interviews, articles, and previous book. In the "Death of Right and Wrong", she further details the hypocrisy of the elite Left, and since she is an "insider", her observations are especially profound.

Not being familiar with Ms. Bruce's work or history, I was pleasantly surprised by her handling of the subject matter. From an insiders' perspective, she takes the libral elite to task, and in the process exposes one of the most dangerous agendas on the public stage. In defining and exposing the left's "newspeak" and intolerance of true dissenting opinion she portays a morally and ethically bankrupt movement which has pitted itself against the overwhelming majority of Americans, while simultaneously espousing their dogma as the dangerous, antisocial agenda that it is. Hearing Ms. Bruce read her book, as opposed to "reading" it, is an added bonus. One cannot listen to her without hearing the passion that she brings to the subject matter. Considering her background, the added dimension makes this book a real gem.

I was not familiar with the author, but the subject matter was interesting. It is even more interesting when learning her background, beliefs and postions on issues.
It's nice to know the despite certain differences of opinion, we can agree on the basics.
I found her definition of "Tolerance" to be very enlightening.

For the most part, Ms. Bruce makes an excellent case that the Left has gone off the deep end. After a while those she begins to sound like a conspirisy theorist. Everything is a plot, even things that aren't. What I wanted to hear was how she justufies her Lesbian, Pro-choice stance in the context of her obviously conservative views.

powerful insights on the Left from an insider

Tammy is an excellent writer. Her ideas are very articulate, well-developed, insightful, bold, and cut to the heart of the matter. A world devoid of right and wrong is truly a frightful world to contemplate, and Tammy exposes the dangers we face with skill and clarity. Great narration by Tammy. Gripping. I hope she released more of her books on Audible.com

A genuine call to sanity!

Tammy Bruce tackles not just tough moral issues, but how ideologues have wedged themselves between decent people and obviously correct positions. She invites us to take a stand for goodness and reject the PC and victim culture's degeneracy for what it is.

As a polemic it starts out as entertaining, provocative, even interesting. It wears thin quickly however. A point becomes a rant and in the end I found the rant unsustainable. There is no point to this book except as one tiresome arguement that the 'liberal left' is the cause of all that is wrong in our society. A bit of critical reflection tells us that it isn't that simple. Nothing is. If you take the binary view of life, that everything can be reduced to black and white morality with no gray areas, this is your book. For people seeking informed and balanced social criticism, I would urge you to search elsewhere. I found this is a huge waste of time.

Super book, I don?t agree with her pro-choice stand, or her ?life style? but the book opened my eyes and caused my mouth to drop open in amazement! She nails down the ?far? lefts agenda and sheds light on their activities targeting our youth. A must book for those who think of them self as liberal and or conservative.

This is very well done. Tammy Bruce is a very intelligent woman. Sad that she is still gay after all that she knows now but she really doesn't parce words. Very interesting and gave me information I didn't know before. I am really glad I listened to this book.