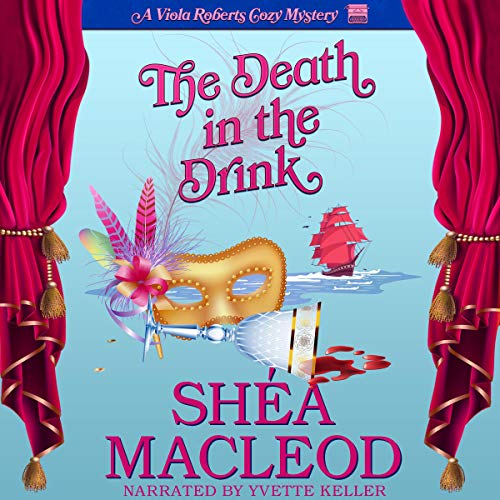 The Death in the Drink

The Death in the Drink

When the guild’s nastiest member winds up dead in the drink, Viola is convinced it’s no accident. And after the husband of the deceased gets into a brawl on the front lawn of the town’s most well-known landmark, she knows something’s up. Armed with nothing more than a folding fan and her wits, she sets out to unveil the killer before somebody else winds up in Davy Jones’ locker.

What listeners say about The Death in the Drink

I enjoyed this mystery. Viola is a fun character and her friends are great supporting characters. I hope we haven't heard the last from Viola.

This is a really entertaining cosy murder, mystery in the Viola Roberts series. The characters, humour and intrigue are great. Viola once again finds herself embroiled in a murder but this time it’s at a Regency re-enactment party she has been coerced into going to. Some of the description and situations Viola finds herself in are hilarious, I love her sense of humour too. The narration fits the book perfectly, giving the characters individual voices and bringing out the humour in the story well. Great cast of characters and a plot that keeps the killer concealed until the end makes this a fun, enjoyable story to listen to.

Excellent adventures with Viola and Cheryl!

Viola and Cheryl are at it again in the latest mystery in Death in the Drink. You know you have a great story when you enjoy spending time with the characters. It doesn't get better than that for the reader. The Viola Roberts series is much more than just good entertaining characters. The plotting, mystery, suspense are well written. The book is even better when you add the narration of Yvette Keller. Her voice creation and acting was perfect for this series.

THE BEST OF THE SERIES SO FAR

THE DEATH IN THE DRINK is the seventh book in the Viola Roberts Cozy Mystery series. Though each will stand alone, it is far better to read them all and in the order of release. The best of the three I have heard and I really want the rest of the series now. This was a fun, cozy mystery. The established characters continue to charm my heart while the new characters delighted my funny bone. The story was well choreographed with plenty of interesting research into a new topic to keep it interesting and fun. The final word: the final chapter is nicely set up for the next adventure as Viola, Lucas, Cheryl, and Bat will be taking a couples’ vacation to wine country. Now what do you think the chances are that they won’t be involved in the discovery of a body? Narration: Yvette Keller is absolutely marvelous as a narrator. She does dramatic pauses better than anyone I have heard in a long time – perfectly timed. She gives her voices the right amount of giggle, suspense, tears, or whatever the scene needs. I could listen to her anytime! Note: While I received this book as a gifted audiobook copy, my opinions are my own and are given freely. Title: THE DEATH IN THE DRINK Series: Viola Roberts Cozy Mystery #7 Category /Genre: Cozy Mystery Recommended for: 14+ due to language Listenability: OK for most ears Received from: Shéa MacLeod (as an Audible gifted copy)

Viola has returned and all her friends including Lucas. It feels like lots of time should have past but it has not. Viola finds that she in back in the vicinity of a dead body. I not so sure that this one didn't deserve the death, but maybe not so dramatic. That type of death should be reserved for the truly nasty. Maybe I should retract that. Nasty was being to nice of a description. Being with Viola again and the trip she made down Regency lane was fun. Not funny, but fun. I enjoyed learning new things and seeing Viola out of her comfort zone. You could see growth in her character. She still is blunt and to the point. I don't want her to lose that. Yvette has brought to life the characters and the sass of Viola will be loved through it all. The Death in the Drink showed growth in the characters and expanded the writing of MacLeod. I find that with each one I want more from Viola and maybe a real relationship commitment.

I still loved the narration but the end made the stars take a nosedive. I guess Shéa MacLeod wrote herself into a corner or couldn’t find another way for Viola to solve the case while still surrounded in the midst of it all but this book was definitely more plot than character driven.