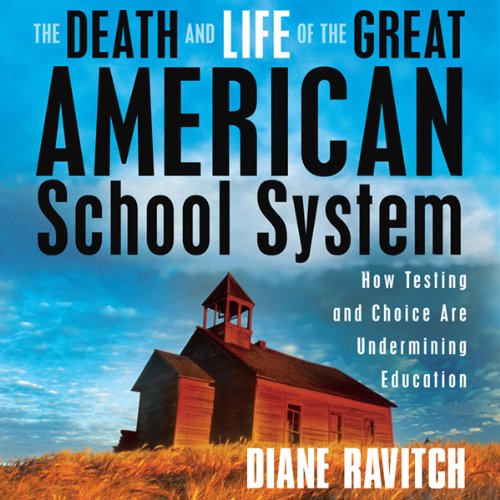 The Death and Life of the Great American School System

How Testing and Choice Are Undermining Education
By: Diane Ravitch
Narrated by: Eliza Foss
Length: 14 hrs and 19 mins
Categories: Non-fiction, Social Sciences
5 out of 5 stars 5.0 (2 ratings)

The Death and Life of the Great American School System

In this best-selling expose of national policy gone wrong, America's foremost historian of education, Diane Ravitch, renounces her support for reform policies implemented over the past decade that she says are wrecking America's cherished tradition of public education. Strategies like accountability schemes based on questionable standardized tests, merit pay for teachers based on gains on the same unreliable tests, vouchers, and charter schools have been oversold as solutions for our educational problems. Policymakers pushing a market model of reform and charter schools are on the wrong track, ignoring classroom realities. The more they push these policies, Ravitch says, the more they will harm our nation's school system and undermine the quality of education.

The bipartisan No Child Left Behind program ("NCLB") implemented with a heavy political hand nationwide, has failed to improve education. It has turned our schools into testing factories to train children how to take standardized tests instead of giving them the knowledge and skills that are necessary components of a good education. The federal "sanctions" and "remedies" now mandated nationwide have unfairly stigmatized thousands of schools, putting them at risk of being closed and privatized.

The "miracles" touted by districts under the new policies vanish on close examination. Test scores in many states and districts are inflated by statistical game-playing and lowered standards. The over-emphasis on testing has all but eliminated the essential elements of a solid education, including history, civics, science, the arts, geography, literature, physical education, health education, and foreign languages. Privatization and deregulation has led predictably to some good and some bad but, on average, charters do not get better results than regular public schools-just new federal subsidies. Teacher evaluation by student test scores is a deeply flawed approach to hiring and job tenure that is driving good teachers out of public education.

The future of public education is at stake. A democratic society needs a healthy, vibrant public education system with good public schools in every neighborhood. On our current course, the schools will be privatized, deregulated, and turned over to entrepreneurs. Based on a careful review of the evidence, Ravitch says that this course of action is unlikely to improve American education.

I originally read this in hardcover and found Ravitch gives a detailed, well-thought-out and valuable critique of new "educational initiative." However, the highest credit goes to Eliza Foss who is superb at narrating a relatively dry text, filled with facts, statistics, etc. I am impressed at how well she aries her voice and holds the listeners interest in the fact based non-fiction work.

Finally, a reality check on teaching and learning

Exposing the politics of education, sharing the important role that demographics play in learning, describing the real-life challenges that educators face, the sequence of the story.

The chapters on District 1 in NYC and the part about the failure of the San Diego public schools that recruited the business person to be their superintendent.

The author's admission that she was caught up in the accountability movement associated with NCLB and her revelation that the system is flawed and that it disadvantages low-wealth schools.

The description of a business model for education, as though learning were a market commodity, and the damage that model does to useful learning in our schools.

The description of the New York educational "reform", and the flawed statistics that supported the results as effective.

No! Way too dense. One disadvantage of audiobooks is that a report like this, with reference to many statistics in the narrative, is difficult to follow--hard to remember what numbers were cited a few paragraphs ago. In printed books, you can just flip back.

I appreciated the fact-based investigation and arguments Ravitch offered, and will be watching our own schools to see if they can move away from "teaching to the test", a move that both of my daughters, both schoolteachers, find is an impediment to their ability to educate their students, especially in critical thinking and problem-solving.

A must read for anyone involved in School Reform

What was one of the most memorable moments of The Death and Life of the Great American School System?

The narrator needed to speak clearly, and louder, at times she drifted into a soft whisper, and talked too sensual for the topic.

If you could give The Death and Life of the Great American School System a new subtitle, what would it be?

You must read this book, if you are in anyway involved with education. If you are concerned about the state of students today, and want to understand why and how the problems of K-12 are now fully entrenched into Higher Education, you need to be aware of the history of decentralization of school. This book is brilliant and enlightening.

Interesting read for every teacher

A short history of the American educational system, including an honest look at the causes and consequences of the current trends.

This book should be read by every educator - especially administrators. Also, those in the political system who have any influence on how education systems work. Ms. Ravitch has taken a bold stance against current practices of testing children unfairly and using that data for evaluating teachers and assigning monetary support.
As a retired teacher of special needs kids, I saw many of the tragedies of high-stakes testing, including ignoring student needs as secondary to the curriculum.

Liked it, didn’t love it.

I enjoyed this book. I thought Foss was a great narrator, she did a good job conveying the frustration that comes off at certain points in the book; but it wasn’t constant (like some books I’ve listened to) so that was nice.

I agreed with many of the points brought up in the book. There’s a lot of great information presented, but 2/3 into the book it doesn’t seem to offer much. Charter schools, testing, and choice are thoroughly picked apart.

If you’re interested in American education, and its reform I recommend this book. I read it because I wanted to learn more about education in America, and now that I am done I can say without a doubt that I do know more.

I really enjoyed listening to this audiobook, it was very informative and I learned a lot.

<br />A must-read Diane is a true education historian

Every parent should read this book before making any educational decisions for their children very future in America's broken school system. A system where our children have become a commodity and it's all about the profits!

A tedious book with some important information.

Woven through the tiresome repetition are facts critical to understanding the situation in American education. Slog through it.