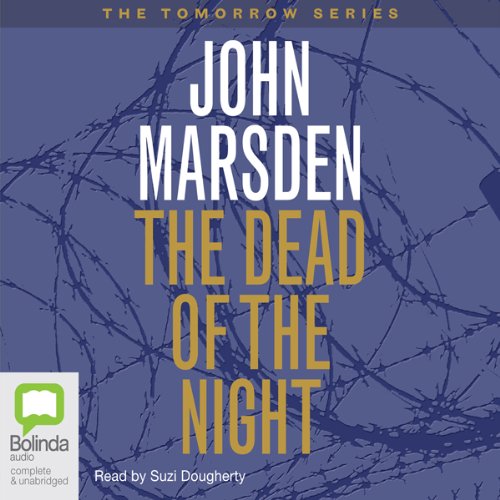 The Dead of the Night

By: John Marsden
Narrated by: Suzi Dougherty
Try for £0.00

The second book in the internationally best-selling the Tomorrow, When the War Began series.

"There was a crashing sound from the bushes. I spun round, wondering if this was my death, the last movement I would even make, the last sight I would see...."

It's tough surviving in Hell. But sometimes Hell can be a haven. Their country has been invaded. Their homes have been occupied by strangers, or destroyed. Their families are facing death at the hands of a merciless enemy. But one group of teenagers, fugitives in a remote valley, will never give in. Not without a fight. But sometimes courage demands too high a price.

What listeners say about The Dead of the Night

I enjoyed this and will get the next. Not as fast moving as the first. Worth reading in June 2020 for ideas.

This book is a great read and continues the story from tomorrow when the war began perfectly keeping me griped the whole time.

We started with the first book which we watched as a film first and then listened to the audiobook. After that we were of course desperate to see what happened next so we got this book pretty quickly, shame its not planned to come out on film though. This was a great follow up and dealt with difficult themes involved in any conflict such as death and loss very well. It also covered what the usual teenager would be going through but of course they had to deal with it in a very alien situation, they had no parents/adults to turn too and were all alone. Not only did they have to cope with the war but the usual struggles being teenager can bring. This book grabbed us just as much as the first one, we just wanted to keep reading to find out more. Its quite amazing how the author John Marsden, who was a middle aged man when he wrote this has captured the thoughts and feelings of teenagers very well in what is a very stressful and alien situation. Can't recommend this series of books highly enough. Again as we said in our previous review on the first book don't be put off by the classification that audible/book publisher gave to this book as its suitable for far more than just 11-13 year olds. We are adults and we loved this book as well as the others. If you enjoy a well written, well narrated story with three dimensional characters then give this series of books a try and leave your preconceptions behind. If you love apocalyptic stories then you'll love these books.

Very funny but amazing and just. its a good read
and I shall continue to read the rest of the series. Ellie can be annoying at times but overall the boom is really good.

Listen before you see the next movie

Growing up I was a huge fan of these books. My love for them has recently been rekindled with the movie release of "tomorrow when the war began". Whilst the movie did do the books justice (well filmed and acted) it understandably had to leave alot out. For this reason I decided it was time to re-read (or in this case listen) to the series. They are just as good as I remember! What is more enjoyable however, is watching my partner's responses as he listens. He had never read the books growing up, so is very excited and surprised by all the twists and turns that occur (he even got a bit teary at one point). The only issue is he became so involved in the book that he wanted to listen as often as possible, this means we finished it in only two days. I am now making him wait until I buy the next one (don't know how long I can hold out though). A very good listen and I would reccomend it to teens and adults alike.

Great characters, strong unique plot, and well written. Adults will enjoy this series as much as teens.

Totally wrapped up in the story

Yes. The story is riveting. You just can't stop listening.

I think the way Marsden fuels the conflict within the group and the tension of their challenges make for masterful story telling.

This series is great. Highly recommend.

This series still holds up.

I read these books as a teen and I hated to read at that time. The series is still amazing.

Marsden has written some very powerful books in this series, poignant & thoughtful, with well developed characters. I don’t know how much a young adult reader will get out of these, but I, at almost 70, have been brought to tears by them a number of times.

I enjoyed this book and would reccomend it but found some parts repetitive. the narrator is very good so that is a big plus.

The storyline in this second book of the series was thin compared to the first book. The characters (other than the narrator) are too incidental. I realize that it is told from the narrator's perspective but either she is very self absorbed or the other members of her group are terribly dull. I will listen to the next book because I like the premise of this series but if it is as numbing as this one, I am done. The books could be a bit longer and perhaps this would help. But that would reduce revenues.

Ellie and her five friends are still struggling to survive after unknown enemies invaded their small Australian town. Two of their friends have been taken behind enemy lines and Ellie and Homer work together with the other to mount a rescue mission. They are all struggling with the larger question of how to make a difference and fight this invasion on their own terms. They are also hoping to find another group of natives to work with and really make a difference in this war.

My main complaint with this book is that it's a short book and not much happens. There are vast sections of nothingness while we wait for the characters to get to the next interesting event. While this does a good job of conveying the boredom interspersed by spurts of deadly scenarios, it's not that exciting to read about. After reading this book I understand how the series can go on for seven books, it just progresses incredibly slowly.

All the characters are okay. The book is told completely from Ellie’s POV which means we see all of the other characters colored by her perspective. There wasn’t as much interesting survival in this book; there were more conflicts between the characters and lots of discussion about how to make a difference to the war effort.

Ellie rehashes her feelings over and over again; feelings about killing, about violence, and about how the rest of the world is reacting. There is just too much of this and not enough action. I found a lot of it to be quite boring. Some of the discussion is good, but similar themes are just repeated over and over.

We don’t really learn a lot more about “the enemy” either. Most of the questions asked in the first book remain largely unanswered.

Overall this was an okay addition to the series but I probably won't read any more of this series. The idea is interesting, however I am not a huge fan of war stories. I do enjoy survival stories, but there is a lot less survival stuff in this book than there was in the first book. I also feel like the story moves very slowly and the characters in here aren't my favorite either.

Would you try another book from John Marsden and/or Suzi Dougherty?

Would you ever listen to anything by John Marsden again?

Which character – as performed by Suzi Dougherty – was your favorite?

This is the 2nd book in the series. I was of two minds about buying this one after the first. It wasn't the writing, it was the plotting of the invasion aspects of the story. Unless this story is supposed to be an allegory about the differences between the "haves" and the "have nots", there is no good reason not to reveal who has invaded Australia. It beggars the reader's reasoning that these young people could not tell who had invaded them. In the second book, there is a scene where they watch through a window as "colonists" clean and tidy a house. Is the author trying to make me believe that they couldn't then tell who had invaded them? Apparently, Australia is the "have" country and ? is the "have not" country who believes that since they are over crowded, they should be allowed to invade Australia. I'm sorry...What? I also could not credit that Australia is receiving so little help from their allies. If the author really believes that there are countries out there so desperate for land that they would invade another country to get it, then he should stand up and name them in the book. This series is too much like an Australian version of Red Dawn. And, on a minor note, how come no one has cell phones? They aren't even mentioned. I keep trying to like this series, but I'm still not certain I'm going to buy the next one.