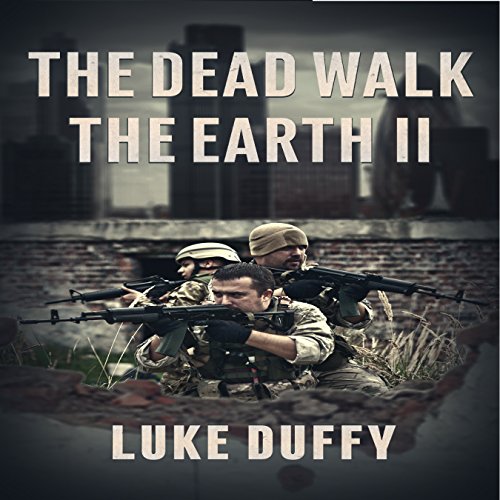 The Dead Walk the Earth, Volume 2

The mainland is lost, conquered by the armies of walking dead that now roam the earth, consuming all in their path as they spread like a black plague through the wasteland that had once been civilization. As the remains of the human race retreat to the islands, clinging to them like life rafts in an ocean of terror, these ravenous monsters, the evil shadows of humanity, become the dominant species on the planet.

Disease, famine, and death begin to spread through the cramped refugee camps, threatening the continued existence of the living, forcing the remnants of the government and armed forces to begin an offensive that would recapture the ground lost to the infected hordes. The survivors of the team, finding themselves placed at the spearhead of the great counterstrike, are given a special mission that would help tip the scales against their rotting enemy. Now they must fight for the entire world.

What listeners say about The Dead Walk the Earth, Volume 2

I really enjoyed this book it was fast paced and action packed with some great plot twists. I was hooked from the beginnning and on the edge of my seat, I can't wait for the next book. I received this book in exchange for my honest review.

Luke Duffy has written a great story I am dealing with the narrator, but the story is fighting through - on to listen to book 3 now!!

the narrator had the most God awful American
trying but utterly failing to impersonate a whole range of British accents.
northern? utter failure
London? utter failure
Scottish? utter failure
irish? oh my good God.
was there not one English guy anywhere in America who could have read a few words and not totally destroyed a good story

Great series so far and since I thoroughly enjoy zombie/mi!itary/apocalypse , this author has it down for me.

liked it from beginning to end.

The narrator is perfect for the book. some audio books they screw up with choice of narrators my favorite is of course Scott Brick.