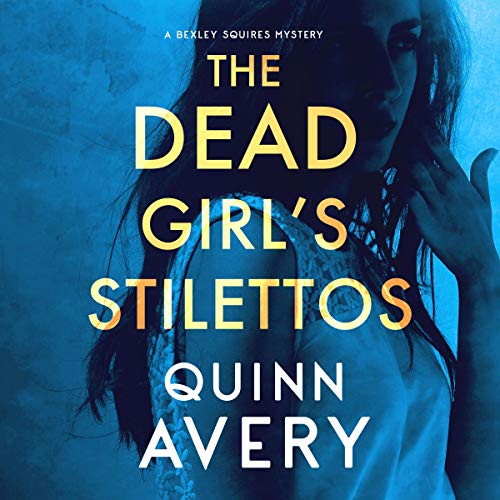 A playground for the rich and famous, a murdered Jane Doe, and a beloved celebrity. Journalist Bexley Squires might be out of her league when she’s asked to solve one of the nation’s most infamous unsolved mysteries.

But she’s broke and desperate for the means to find her sister after her disappearance, and the world’s sexiest actor will pay generously to save his reputation. Only she didn’t expect the detective in charge of the case to be her old crush Grayson Rivers. He’s hotter than the California sun, and their chemistry is the best thing since tacos, but she’s not going to let anything get in the way of uncovering a level of depravity unlike anything she’s ever known.

As tampering witnesses and stolen evidence come to light, Bexley’s network of old and new friends gets sucked into the undertow. If she can’t uncover the secret behind the victim’s footwear, the next wave will kill them all.

What listeners say about The Dead Girl's Stilettos: A Bexley Squires Mystery

Avery Quinn has done it again!!

Sometimes I forget how much I love a good mystery!!! Bexley is an excellent character and the stuff she gets into reminded me how much I love reading / listening to mysteries. This book is so good! When the couple finds the girl in the beach, and Bexley is brought in to help clear Deans name... I wondered how this was going to go. I was very surprised at what actually played out!!! This is a very well written, not obvious plot line and it kept me listening intently!! I love Avery Quinn’s writing.. so I’m not surprised this was so good... and Victoria Villarreal did an excellent job with the narration!!! @audiobookobsession

Pulls you right in

This book really hooks you right from the first page. This story is both a mystery and a bit of second chance romance. I enjoyed the mystery side of the story because it had good twists and turns to keep me wondering where we would end the story. While it did have the romance aspect it was a secondary part to the story. I found that I enjoyed listening to the narrator and think she was a good fit for this story. #audiibookobsessionreviewer

Brilliant! This book has so much going on. Lots of twists and turns. A fantastic “who done it”. Written very well. Great strong kick ass characters. Great narration.

Bexley Squires Mystery Book One. Bexley Squires is returning home with a single purpose - find her missing sister. To do that, however, she needs money to hire an investigator. With that purpose in mind, she meets with Dean Halliwell, the hottest star around, to prove his innocence. Dean insists that he was not the man who killed the girl who washed up onshore, but the police questioned him and the press ran with that story. Bexley begins by interviewing the cop who spoke with Dean, her old crush Grayson Rivers. As she digs deeper, Bexley finds that maybe both mysteries are connected. If you're looking for a fun Hollywood mystery, this is the book for you! 🎧AudiobookObsession

Caught up in this story from the very beginning, Quinn Avery has woven a complex mystery for Bexley Squires to solve. I could not stop listening to this one, the further I got, the more I needed to know. Bexley is hired by a famous actor to clear his name of a murder. Though a journalist, her detective skills are proven. She takes the job because the money will help her to find her missing sister. When she starts the case, her old high school friend Grayson is the detective on the case and these two set out to solve the murder. This story is action packed, and has so many twists that I kept changing my mind about who the murderer was. It's smart, has a little romance and is very entertaining. Victoria Villarreal does a wonderful job with the narration. It's my first listen by her, and really enjoyed her performance. Well paced, she gives great inflections, adding to the mystery and suspense. Her voices are distinguishable and her voice is easy to listen to.

What an amazing story!!!! The story line, and narration was pure perfection. There was a thrill and angst through the entire book and I want more!!!! I’m now a fan of both author and narrator

An amazing listen from beginning to end. You become engrossed and try and solve the mystery of the dead girl yourself. The plot twist is very unexpected

This was my first Quinn Avery's book, and won't be my last! The Dead Girl's Stilettos is the first book in A Bexley Squires Mystery. This is a great start to this Series. This mystery is suspenseful, and intriguing. Bexley and Grayson are great characters. Their investigation is captivating, filled with unpredictable twists and turns. The story has also a little romance. The supporting characters are interesting. Victoria Villarreal did a great job with the narration. She has a great voice, well paced and easy to listen to. I highly recommend this audiobook. #AudiobookObsession

Loved the plot! Had my attention the entire book! I did not care as much for the narration. Overall would recommend the read....thank you Quinn Avery!

Such a good mystery! I was going back and forth on The Who done it’s throughout the entire book. This book is very well written and will keep you interested in the mystery until it is solved. Narration was done equally as well also.

A detective in the making

The heroine Bexley is a journalist who finds a better suited career, as she takes on a job to prove a man's innocence. This has been the PERFECT book to get me over this funk, while for a hot min there is a love triangle of sorts the focus on the story isn't romance but the ongoing investigation on the owner of the stilettos. I was enthrealled on the twists and turns the author threw at me and when I thought it was over a big surprise is brought to light. audiobook Obsessions 🎧

The Dead Girl's Stilettos: A Bexley Squires Mystery, a debut novel by Quinn Avery gives you a glimpse into what this invigorating latest series brings to this genre. An amateur sleuth mystery with a speckle of romance not to deflect from the mystery. The settings are well detailed and described vividly. The writing style as well as the composition takes a solo twist with its changing pov's, shifting gears, told in parts, and gives the mystery a suspense within a mystery. Character's are well seasoned with compelling characteristics. This author creates a mystery with unexpected twists swirling through the pages, and will keep you guessing till the end. Narator Victoria Villarreal performance was keen. Her voice was clear and concise. 🎧 Audiobook Obsession 🎧

I received a copy of this audio book in exchange for an honest review. I really enjoyed the mystery. The main character is likeable and smart. The mystery built around the shoes was clever. Supporting characters are interesting I want to see what is in store for these characters in the next book. The shift in POV mid book kind of threw me off, but it only lasted for a very small portion and went back to the main character view. Having finished, I can see now why it was done that way. The narration was good. Her delivery was clear. I listened at a faster speed 1.4x which worked well for me. I think the faster speed made the narration more enjoyable. I liked the book and would read more from this author.

The Dead Girl's Stilettos by Quinn Avery pulled me in from the very beginning. The author created a great character in Bexely Squires. I loved how she was after more than a story. The unexpected twists in this book was great. I had difficulty trying to figure out who was good and who wasn't. The mystery in this book was really well done and the storyline original. Victoria Villarreal was great performing this book. I could hear exactly who was speaking. I requested this review copy audiobook and have voluntarily written this review. I will definitely listen to more books by this author and narrator!