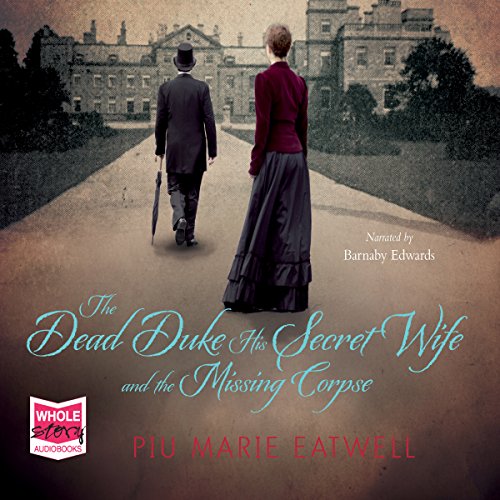 The Dead Duke, His Secret Wife and the Missing Corpse

By: Piu Marie Eatwell
Narrated by: Barnaby Edwards
Try for £0.00

1897: An elderly widow, Anna Maria Druce, made a strange request of the London Ecclesiastical Court: it was for the exhumation of the grave of her late father-in-law, T. C. Druce.

Behind her application lay a sensational claim: that Druce had been none other than the eccentric and massively wealthy 5th duke of Portland, and that the now dead duke had faked the death of his alter ego. When opened, Anna Maria contended, Druce's coffin would be found to be empty.

The legal case that followed would last for ten years. Its eventual outcome revealed a dark underbelly of lies lurking beneath the genteel facade of late Victorian England.

"A lively account of the light shone on the lies, deceit and hypocrisy of Victorian society." ( The Times)
"A brilliant forensic analysis of the intriguing Druce case, and wonderfully revealing of the many layers beneath Victorian respectability." (Mr Justice Haddon-, Cave, judge on Richard III case.)

What listeners say about The Dead Duke, His Secret Wife and the Missing Corpse

This was an entertaining and informative read. There are so many weird twists and turns in the story. Eatwell is a good writer and the way she constructed the narrative keeps you interested. Barnaby Edwards was a great narrator, but it was a little odd at the end when it switches to first person and the male narrator is narrating for a female author. Still, this is definitely worth reading if you like history.

The story and its eccentric figures continue to surprise and delight right to the very end. Barnaby Edwards flawlessly voices every character and every stray piece of dialogue, always in an appropriate accent. Be careful in public! He'll make you walk around with a big grin on your face!