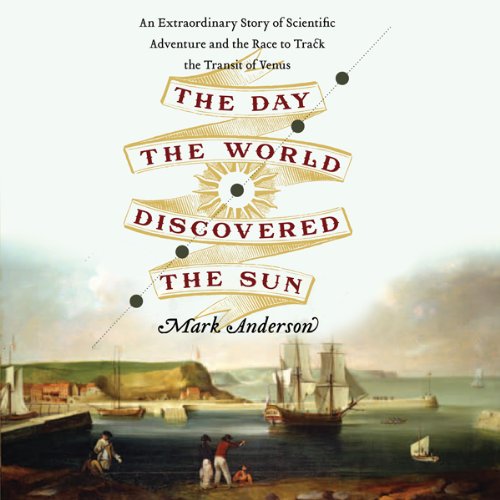 The Day the World Discovered the Sun

By: Mark Anderson
Narrated by: Robert Blumenfeld
Try for £0.00

On June 3, 1769, the planet Venus briefly passed across the face of the sun in a cosmic alignment that occurs twice per century. Anticipation of the rare celestial event sparked a worldwide competition among aspiring global superpowers, each sending their own scientific expeditions to far-flung destinations to time the planet’s trek. These pioneers used the Venus Transit” to discover the physical dimensions of the solar system and refine the methods of discovering longitude at sea. In this fast-paced narrative, Mark Anderson reveals the stories of three Venus Transit voyages--to the heart of the Arctic, the New World, and the Pacific - that risked every mortal peril of a candlelit age. With time running out, each expedition struggles to reach its destination a quest that races to an unforgettable climax on a momentous summer day when the universe suddenly became much larger than anyone had dared to imagine.

The Day the World Discovered the Sun tells an epic story of the enduring human desire to understand our place in the universe.

What listeners say about The Day the World Discovered the Sun

How they did it?

What made the experience of listening to The Day the World Discovered the Sun the most enjoyable?

It is amazing to know how people made an immense effort to measure the distance to the sun back then.

What was one of the most memorable moments of The Day the World Discovered the Sun?

The happiness of the observers when they finally measured the venus transit.

This is a book that inspire us to do better.
It is amazing to know that several centuries ago man was capable of such gigantic effort for the improvement of the mankind.