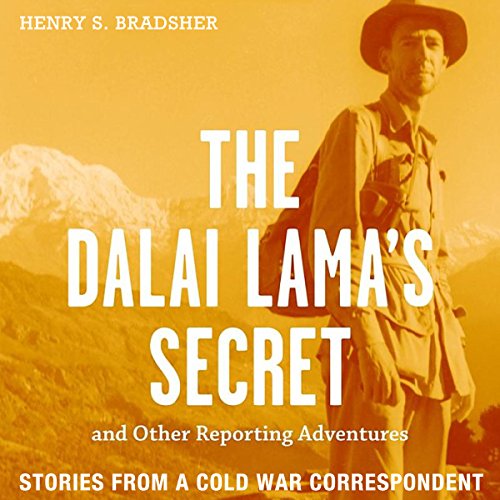 The Dalai Lama's Secret and Other Reporting Adventures

By: Henry S. Bradsher
Narrated by: John Chester
Try for £0.00

For over a quarter of a century, award-winning journalist Henry Bradsher reported stories from around the world. In this lively and engaging account, Bradsher recounts episodes from a distinguished career that took him to the Himalayas, the jungles of Bhutan, Kremlin caviar receptions, China's Forbidden City, and the battlefields of Vietnam. Throughout, Bradsher emphasizes the unpredictability of a correspondent's life and the strains, perils, and privileges of standing witness to momentous world events.

In Moscow he covered the downfall of Nikita Khrushchev, and he later suffered the KGB bombing of his car in response to his tenacious reporting. His incisive coverage from Hong Kong led Chinese officials to label Bradsher as "the most despicable" journalist. But after a power shift, they welcomed him as the first American journalist allowed to work in China in over a year. Bradsher predicted and reported Bangladesh's independence struggle, and he worked in the Middle East, covering Egyptian-Israeli peace arrangements.

Access to the events that shaped the Cold War also led to Bradsher's meeting many world leaders, including Nehru, Khrushchev, Leonid Brezhnev, Zhou Enlai, Richard Nixon, Gerald Ford, Jimmy Carter, Ronald Reagan, Anwar Sadat, and Menachem Begin. Although Bradsher's reporting riled officials in Moscow, Beijing, and even the United States - prompting Henry Kissinger's attempts to thwart the publication of his reports - history has proven its accuracy. Bradsher's relentlessness in his own work accompanied a profound respect for fellow journalists worldwide who endanger themselves to keep the public informed.