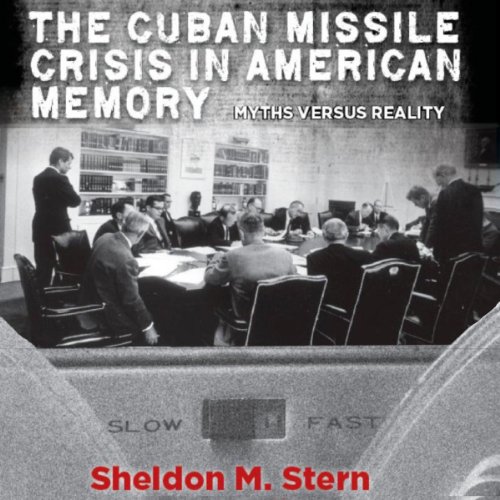 The Cuban Missile Crisis in American Memory: Myths Versus Reality

The Cuban Missile Crisis in American Memory: Myths Versus Reality

This audiobook exposes the misconceptions, half-truths, and outright lies that have shaped the still dominant but largely mythical version of what happened in the White House during those harrowing two weeks of secret Cuban missile crisis deliberations.

A half-century after the event it is surely time to demonstrate, once and for all, that RFK's Thirteen Days and the personal memoirs of other ExComm members cannot be taken seriously as historically accurate accounts of the ExComm meetings.

"Informed and informative, The Cuban Missile Crisis in American Memory is a seminal work of impressive scholarship and a highly recommended addition to academic library 20th Century American History reference collections in general, and U.S. – Soviet Union Cold War Studies supplemental reading lists in particular." ( The Midwest Book Review)
"The Cuban missile crisis may be the most thoroughly documented yet grossly misunderstood episode in Cold War history, and the value of Sheldon Stern's splendid book is that it punctures the myths and unearths the truth so compellingly, drawing on irrefutable evidence, that you'll never think about the crisis or about JFK and his 'best and brightest' advisers in the same way again." (Fred Kaplan, Slate's "War Stories" columnist; author of 1959 and The Wizards of Armageddon)
“This is a clearly written, timely, and significant contribution to our understanding of the Cuban missile crisis." (Philip Brenner, American University)

This is not a historical or well ordered recount of the Cuban missile crisis, it is more a recount of how all the other authors on the subject were wrong and this author is correct. This is not a good or easy to listen to audio book.

It may have made a good academic paper within a series on the subject but the book doesn't not stand on its own.

What did you love best about The Cuban Missile Crisis in American Memory: Myths Versus Reality?

I was amazed at how the Crisis is so misunderstood thanks to a half-century of myth and false-hoods.

What other book might you compare The Cuban Missile Crisis in American Memory: Myths Versus Reality to and why?

What does Robert J. Eckrich bring to the story that you wouldn’t experience if you just read the book?

He sounds like he was there - very reassuring nd believable.

Not really other than the fact that much of what I believed about Bobby Kennedy continues to be erased by the real story.

This should be read by Social Studies/History teachers everywhere for teaching the truth is impt.

The book is an important update to the self-serving narratives of those present at the EXCOMM meetings during the crisis. Using the actual tape recordings reveals the real truth untainted by politics.
The book is a bit difficult as an audiobook. He does not view the crisis chronologically but by examining the various aspects of each of the participants. He will follow one all the way through and then start anew with another character. it was just a bit difficult for me to keep straight.
I did enjoy the book and found it makes a fine contribution to the story of the crisis.

What disappointed you about The Cuban Missile Crisis in American Memory: Myths Versus Reality?

The book never really got off the ground as either a factual narrative or an historical compilation. The author made repeated references to what other authors did or did not report correctly. Ugh! I am sure there is a real revelation to communicated, but I could not endure the pain long enough to find it.

If you could play editor, what scene or scenes would you have cut from The Cuban Missile Crisis in American Memory: Myths Versus Reality?

The personal ax the author has to grind with other writers about the topic.

Where does The Cuban Missile Crisis in American Memory: Myths Versus Reality rank among all the audiobooks you’ve listened to so far?

This is a good book, written well and well performed.

This is an important book, putting some light on those important events and understanding them.
Everyone that interested at the events of the missile crisis , and what to have good understanding and the people that were part of it, needs to read this book.

The author, former director of the Kennedy Library and best historian of the Cuban Missile Crisis, actually listened to the JFK tapes, and you can, too. JFK had A taping system that only he and RFK (and aides who operated the taping system) knew about. The tapes are now public and you can listen to them online. They show that all the movie and TV versions, RFK's book, and McNamara Fog of War documentary are all wrong.

We escaped total nuclear war by sheer luck and the courage of one man. That man was JFK. No one else. In the end, he revoked the standing order to bomb Cuba if a plane was shot down. This angered LeMay, who was ready to launch the attack. Everyone ... Everyone else in the executive committee wanted to launch the attack. What no one knew, because the CIA provided faulty intelligence, was the The Soviets had warheads in Cuba ready to put on the missiles, AND had tactical nuclear weapons in Cuba, Khrushchev had transferred authority to use the tactical to his generals on the ground if Kennedy bombed Cuba.

The Russian generals had already decided that, if Cuba was bombed, they would use the tacticals to attack and capture Guantanamo Bay.v. 9,500 American military would have died. There would have been no turning back from total nuclear war.

>There is much, much more in this book. Almost no speculation, since the author has the tapes and interviews with all the American, Soviet, and Cuban senior officials.

>Do you think you know who blinked? Do you think JFK might have lied to Eisenhower and Truman about the outcome? In the end, who did Khrushchev fear and distrust the most - Kennedy or Castro? Can you guess why?

The author gives the website where you can listen to the tapes yourself for free.

What other book might you compare The Cuban Missile Crisis in American Memory: Myths Versus Reality to and why?

The Company A Novel Of The CIA (which is 90% fact) by Robert Littel. Command and Control about all the incidents where we almost blew ourselves up and almost went to nuclear war by accident or misinformation. Untold History by Oliver Stone and others (10 videos on Amazon Instant Video or DVD. A 30 hour audio book on Audible. The print and Kindle books won't be out until this fall.).

For the history that is wrong, but entertaining, try Thirteen Days by Robert Kennedy, the movie with Kevin Costner, and the documentary, The Fog of War. You might also enjoy the right wing book Brothers In Arms. Very entertaining, but often wrong on the facts.

What about Robert J. Eckrich’s performance did you like?

Everything You Know Is Proved Wrong. Or. We Survived By The Skin Of Our Teeth.

Listen to the tapes free online. As scary as any horror movie. Also, you won't believe how smart all these people were. Even then, all except one got it wrong.