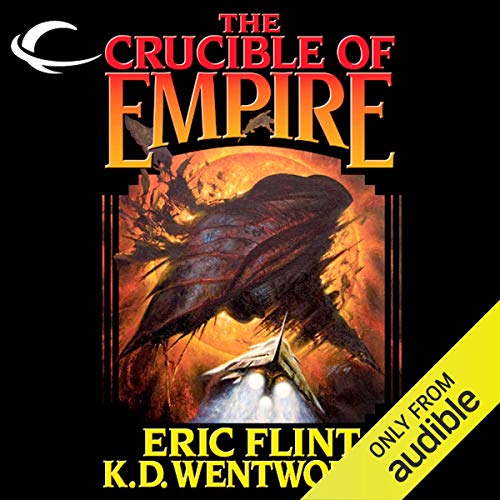 The Crucible of Empire

The Crucible of Empire

Humanity is first subjugated by haughty alien colonizers calling themselves the Jao when Earth is unexpectedly attacked by the implacable and nearly-unstoppable Ekhat, exterminators of all intelligent life not their own. Now the fragile Human-Jao alliance is put to the test. A devastating encounter with the Ekhat in a distant nebula reveals a powerful alien society that may hold the key to defeating the Ekhat once and for all. There’s one big problem: they utterly loathe humanity's ally, the Jao. And why shouldn’t they? It was the Jao who drove them into hiding in the first place. Once again, everything depends on those innovators and idea-generators, the humans, to quell a brewing war and forge a tripartite alliance of very different species - or be blasted to empty cinders if they don’t succeed.

Great Sequel to The Course of Empire

I enjoyed this book even more than the first. The Jao race's character is better developed and individual characters are better developed. The story is exciting but also gives the reader much to think about in terms of relationships between humans and the alien races as well as the strengths and weaknesses of each. Chris Patton does a superb job of reading, making the characters vivid and compelling. Sadly, there is no mention of a sequel on Eric Flint's web site, and with the death earlier this year of coauthor K. D. Wentworth, this is probably the last in the series.

Great character development of the aliens

I really enjoyed this story, and I was sorry to learn that K. D. Wentworth has died, so we probably can't look forward to any more entries in this series. However, I'm grateful for what we did get.

I think Flint and Wentworth did a very good job of developing the alien species: Their appearance and physical characteristics, their thought processes, their motivations, and how they got that way. I thought their society was very interesting, and I would have loved to see how it developed in the future after their contact with humanity. (Hey! Could someone from the urban fantasy community step over here and bring Wentworth back from the dead to write another sequel?)

Like the first book, Course of Empire, the story is all about the character interaction, and straight forward action. I very much enjoyed the switching viewpoints between the three species and their interaction, but you will really need to suspend disbelief in a lot of places. If you are a fan of realistic sci-fi, which takes science seriously, this is not it.

Wanted more from the denouement

This is decent and dependable. Knowing the sort of book I was getting, I found it more enjoyable than the first. The alien cultures are interesting and I enjoyed the interplay. I felt the book ended a bit abruptly, and wanted more from falling action.

Not spectacular, but enjoyable. Three for story, three for performance, but since I wanted more of the same in the falling action...I wound up with four overall.

I read the first book in this series and, when I reviewed it, I gave it 5 stars. Not because of the story (which I thought was OK but nothing special) but because the epilogue of the book changed the entire way I viewed the story and, in my opinion, changed it from an OK 4 star to a first class 5 star book. Now, reviewing the second book in the series, I find myself again giving the book 5 stars although for very different reasons.

This book, which picks up about where the first book left off, introduces an entirely new set of alien characters. While the first book set the background for what was to come, this book excels in the very interesting new aliens which are introduced. Some come from what I have to call the Rodney Dangerfield alien Jao clan (they don't get any respect from the other Jao) and others from an entirely new species introduced with this book. The story revolves around the human-Jao alliance's attempt to save the remaining aliens from an upcoming Ekhat attack. All of this is complicated by the fact that the Jao had been the race that, while Ekhat servants, had almost annihilated them and pushed them into hiding.

The story itself is somewhat pedestrian but the book excels in the characters that are introduced and the interplay between them. We have humans coming to understand and sympathize with the Jao, Jao beginning to see the humans as a truly intelligent species with the beginnings of respect for each other and it becomes clear how the alliance will proceed to gain Jao-wide respect for their new proto clan. The book also ends with what was clearly intended to be the plot for the next volume in the series.

With K D Wentworth's passing in 2012 it does not seem clear that there will be another book in this series and, that if there is, that the book will be as well conceived and written as this one. While Eric Flint is a first class sf writer I have not noticed the kind of interesting character development in the other of his books that I have read. Assuming that much of this came from Ms Wentworth's contribution it is impossible to say if there will be another book and, if there is, if it would be as good as this one. Still, if another book in this series came out I would almost certainly buy it.

Chris Patton's narration is very good and it is nice to have been able to hear all of the names and voices much the same as in the first book. If you liked the first book in this series you will almost certainly like this one.

SERIES INFO:
This is Book #2 of 3 in the "Jao" trilogy. Book #3 was just recently published, and is not currently available on audio.

**This review contains spoilers for the previous book.**

SUMMARY:
This book was a bit hit or miss for me. There were some parts that I loved, some I didn't enjoy as much, and a few I didn't like at all. In general, it seemed like a side trip. It's been left for the third book to explain why it was necessary.

CHARACTERS:
Tully: Still a favorite. He has really grown & changed, but isn't quite comfortable with that fact yet himself. It is interesting to see a spy who was always on the move try to become a leader.

Caitlyn: I found her sections to be even more boring than in the last book. She is an interesting character, but I just don't enjoy reading things from her POV.

Jihan: I'm with Tully and did not like the Lleix culture at all (although I understand how damaged it is by what has happened to it). That made it difficult to enjoy her parts as much as I might have if she had had different surroundings.

Pranks aside, my favorite new character is Kaln, the female Jao tech. Although, by the end, Terra Captain Dannet was shaping up to be very interesting also.

WORLDBUILDING:
I would still like to get more details about the state of current Earth society. We are given a deeper understanding of Jao culture, especially as experienced from outside the highest circles. And the Lleix culture is very clearly laid out. There are some great descriptions of their city and it's conditions. Although I didn't like their culture, these latter explorations of their setting and least important residents were good.

Note: there isn't really any acknowledgement of difference in time (i.e. years old) based on your planet.

PLOT:
We begin with Tully, who was one of my favorite characters in the first book. Most of the major characters from before get at least a cameo in the first few chapters. The current time (2 years later) and situation are made clear. It should be easy enough for someone to get oriented even if it's been awhile since they read the first one (or if they haven't).

Unlike the previous book, which had lots of POVs that were all part of the same set of happenings, this book has two different stories that come together in the middle.

Some concepts were repeated too many times after any reasonable reader should have already understood them.

I love the endings. The Ekhat situation isn't resolved, and even the Lleix are still somewhat in limbo, but it is hopeful and sweet.

HIGHLIGHTS / CAUTIONS:
--Tully & the surviving Krant officers.
--Everyone comes together for the first time
--Tully & the Lleix outcasts


I COULD HAVE DONE WITHOUT: Swearing / the pranks stuff, even if it is central to the plot / anything with Ekhat POV, nasty

OTHER CAUTIONS(?): There is some discussion of human sexual practices from an outside perspective.

As a fan of Eric Flint this was a good enjoyable read. I can't wait to get to book three.

Even better than the first one! Great aliens, great characters and some breathtaking space battles. Excellent narrator for this one as well.

How can advanced races be so stupit?

Almost every conflict that pushes the plot is based on every race involved being so stupid when it comes to psychology that nothing makes sense. Every race involved is an advanced race used to dealing with other alien races yet they cannot accept that every other race might act and react different than them or each other. Not only do they act this way with new races but even with the race they have been dealing with for decades. It gets very tiring watching every character's inability to realize the other races act differently and never being able to either predict how they will act or understand why anything is done the way it is done.

An excellent follow-up to Course of Empire

A long delayed follow-up to Course of Empire. Crucible of Empire is enthralling because of the interesting alien culture represented by the Jao, now the series authors add an additional culture to the mix. This is done extraordinarily well.I am writing this review without having yet finished the audio-book, I have another few hours to go. The reason I am writing this now is that unlike so many other stories in the military-scf fi genre I do not know for certain how this story will end. There is a genuine opportunity for tragedy, and in a genre where the good guys inevitably win in the end my uncertainty is a rare and special gift. I hope the Authors won't take another decade to continue with this excellent series.