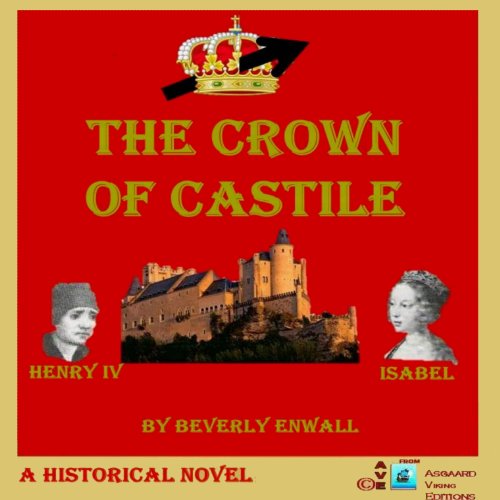 The Crown of Castile

The Crown of Castile

In mid-15th century Spain, King Henry IV ruled Castile. Well-meaning and trusting, Henry's rule and fondness for his male lovers - one of whom, the son of a laundress, was widely chronicled as 'foul-mouthed' - and for many things Moslem provoked reactions ranging from the widespread loyalty of the common people to assassination attempts by the Barons.

The real wielder of power was the Marquis of Villena, referred to in chronicles as the "hand from hell in the velvet glove." This is the story of how, through events and unlikely love affairs among the rich and powerful, Henry's obscure half-sister Isabel became Castile's most famous Queen.

THE AUTHOR NARRATING HER OWN WORK RUINS IT! AWFUL!

Probably not. As an audiobook, this story falls flat. The story may or may not be good but the narration makes it difficult to follow. Just because you're a writer doesn't make you a narrator.

It certainly won't be anything read by this person!

Would you be willing to try another one of Beverly Enwall’s performances?

Not in this lifetime!! I don't think that authors reading their own works is a good idea. Beverly Enwall sounds like a 70 year old Sunday school teacher reading Bible stories to 5 year olds while trying to keep her dentures from falling out. She reads way too fast causing some words to be unintelligible. Why would the producer choose a person with a whiny American accent to narrate a book about Spain? This book would been better served with an experienced narrator who can do European accents or, at the very least, British. Someone like Simon Vance, Robin Sachs, John Lee, Wanda McCaddon or Nadia May could have done a much better job, giving the performance more depth and color. Beverly Enwell adds nothing to her own book.

What character would you cut from The Crown of Castile?

I bought this book because I wanted to learn something about other ancient monarchs and countries after listening about 500 about England. However I could barely listen to this one because "the author as narrator" ruins it. She doesn't deliver the dialogue with a Spanish or Castilian accent and she doesn't use different vocal patterns for the various characters. The latter fumble wouldn't have bothered me if she had a more pleasant and compelling voice. Her vocal delivery is flat and uninteresting. Plus the actual recording has too much reverb so it sounds like it's being produced in a bathroom. This story itself may be good in print, but it is hard to listen to due to the poor narration. In the few chapters I could handle before giving up, I did notice that the author fails to develop the characters and she alludes to events without expanding on them. This book comes heavily recommended with 5 stars but that's based on about 5 ratings with no written reviews. I am the first Audible listener to review this book. I wish somebody had warned me away from it!

SIDEBAR: After writing this review, I decided I'd better do some research on the author. Remember when I said above that she sounds like a 70 year-old Sunday school teacher? Well, she's actually an 82 year-old former 2nd grade teacher!!!! I don't want to hear my Grandma reading about "heated loins" and kings raping young boys!! Ewwww! 😝

6 of 8 people found this review helpful