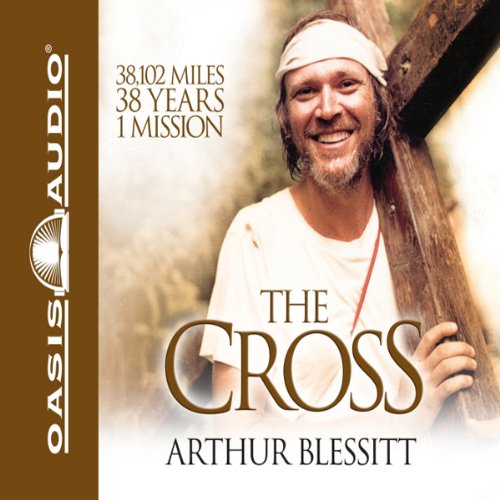 On June 13, 2008, Arthur Blessitt walked his 38,102nd mile in Zanzibar, off of the coast of Tanzania, completing a journey that began in 1969. Arthur started walking with a 12-foot cross on December 25, 1969, and has successfully carried a large wooden cross into every nation and major island group of the world.

In this audiobook you will follow Arthur's journey from his initial call from God to carry a cross from Hollywood, where he was known as "the minister of Sunset Strip," across America to its capital, Washington, DC. Then you will accompany Arthur as he hacks his way through the Darien Jungle from Panama to Colombia.

You'll join Arthur and his son, Joshua, as they take the cross to South Africa in 1986. You will be moved by the stories of how God used them to bring spiritual, physical, and relational healing to many during the final tumultuous days of racial apartheid. You will also trek with Arthur and his wife, Denise, as they cross desert sands to take the cross to Saudi Arabia when the nation was closed to tourists and into regions of the former USSR just weeks after its collapse. You'll be amazed by how people in all cultures respond to the cross. As Arthur has traveled around the world, he has found the cross to be a universal symbol of God's love that breaks down the barriers of language and culture.

What listeners say about The Cross

God’s Glory Revealed in this book

This is an exceptional book detailing what God can do to & with a life that’s surrendered to Him. He shows how his deep relationship with God is tangible in his everyday life.

I found it best to overlook any failings in his personal life so that I can be blessed by the wonderful experience he had with Jesus. Let him who hasn’t sinned cast the first stone.

I am very thankful to have found this audio-book, I am very inspired by the faith of Arthur Blessitt and this audio book really brings to life his incredible journey. I love this man's humility and willingness to share the gospel regardless of how the situation in front may appear. I was really inspired by his accounts of sharing the gospel with people that are normally criticized and viewed as 'extremists'. But Arthur tells us how it is that all people without exception need Jesus and so with love he set out and determined in himself to simply preach Christ crucified to all, regardless of political climates and potential hostilities.

Found this book truly inspiring and uplifting. It really connected me with the heart of God to the point that I frequently cried for the way God has used the ministry of Arthur Blessitt and the huge number of lives he has touched over the years. The narrator also did a great job. Thank you Arthur for your barrier destroying life.