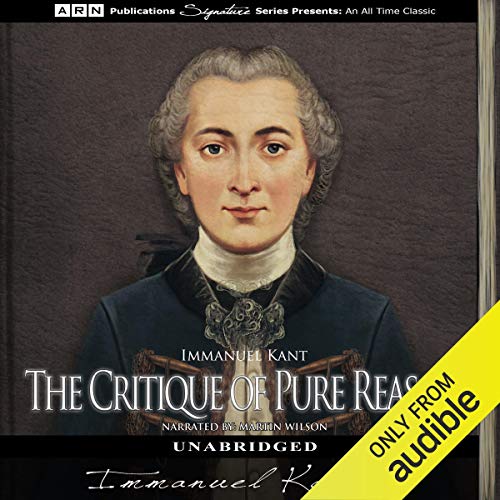 The Critique of Pure Reason

By: Immanuel Kant
Narrated by: Martin Wilson
Try for £0.00

The Critique builds on the works of famous philosophers such as John Locke and David Hume, but Kant takes their ideas further. Kant delves into new ideas concerning time and space and how human knowledge relates to cause and effect. Kant's ideas were unique for his time in that he believed that human knowledge did not conform to objects but that objects conformed to human knowledge. It was also Kant's view that humans were born with some prior knowledge that might also be termed intuition and that additional knowledge was gained through life experience.

Born in 1724, Immanuel Kant was a German philosopher who is considered by many to be an important contributor to modern philosophical thought. The basics of Kant's beliefs were that the human mind was responsible for creating the structure of one's experiences.

What listeners say about The Critique of Pure Reason

This book is exceptional. However, I strongly recommend that those reading for the first time and who are not well-versed in old English do not use audio. The playful language, definition of terms, and stacked qualifiers in many of the key points make it difficult to fully comprehend Kant's work in this medium. Reading this book successfully requires a visual medium, where complex sentences can be read multiple times and revisited as the ideas build, with a writing utensil notebook nearby. Not for the casual reader.

A Must Have For The Philosophy Aficionado

For anyone that's into philosophy this book is a great read and the translation is very straight forward and clear. It probably ranks in the top 5 of the most influential philosophical books of all time. I highly recommend listening to this book rather than reading it as it is quite a difficult read to get through, but it's a must read for any dedicated student of philosophy.

Hats off to the narrator for a good job in this reading!!

Jut about philosophy genre on audiobooks

It’s going to be hard to follow because he will make two long point at once and discuss them both as the same time while addressing the points as former me latter. However the former and latter points have to be around 100-200 word sentences that you are expected to remember and something you can’t just flip back to.

This is a dense and difficult book and the narrator is awful. Get this by another narrator.

Cognition, transcendentalism, logical deduction, a priori and empirical exploration. This book has it all. Kant leaves nothing on the table with a disk philosophical journey into the understanding and knowable

Couldn’t listen to it

The narrator has such a strange style- emphasizing what shouldn’t be emphasized. It sounded like he didn’t understand what he was saying. Disappointed that I spent a credit on this. Now I’m listening to another version and I’m enjoying that a lot more.

The work is powerful, and intellectually energizing. The performance is outstanding, and helps to usher the listener along through the discussion.

Either Kant was a terrible communicator or this translation of his work is terrible. It could be both. In any case, this book is completely unintelligible and a waste of time. If you drive while reading this book you may be in danger of crashing your car because it could put you to sleep.