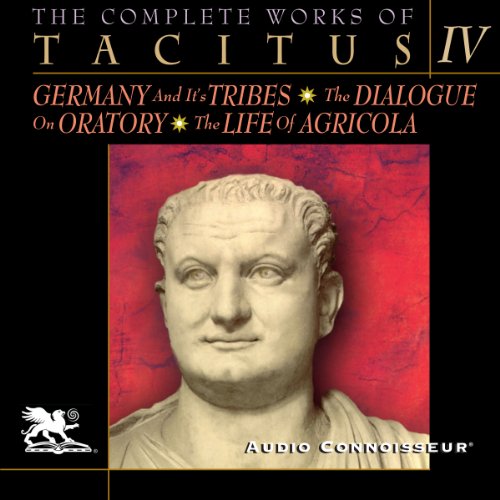 The Complete Works of Tacitus: Volume 4

By: Cornelius Tacitus
Narrated by: Charlton Griffin
Try for £0.00

The exemplary life of a noble soldier/statesman, a description of ancient Germany, and a discussion of oratory are the subjects of three short masterpieces by the brilliant Roman historian, Tacitus.

The Life of Cnaeus Julius Agricola is an almost perfect example of what the Romans called the panegyric, a type of salutary obituary which was invariably produced at the death of renowned persons. Agricola was certainly no ordinary man. For one thing, he was the father-in-law of Tacitus. And for another, he was a genuinely gifted soldier of the highest character, the kind of unsung hero who made possible the success of Roman civilization.

Germany and its Tribes is one of the most interesting pieces to come down to us. It is a very insightful and informed commentary on the feared tribes who lived beyond the Rhine. Although some of the information is incorrect or nonsensical, most of it is quite cogent and represents an accurate picture of the German people in those days. Many will recognize traits that have survived into modern times.

The Dialogue on Oratory is a spirited discussion among four men about the merits or demerits of the state of oratory in their time versus its practice in the past. By turns amusing and dazzling, the conversation keeps the listener entertained.

This production uses the famous translation by Church and Brodribb, considered the finest in the English language.

What listeners say about The Complete Works of Tacitus: Volume 4

My opinions is the awe of Tacitus's eloquence. It flows in a stream of thought very much like a wind of the ocean. Constant and soothing.

Another superb performance by Charlton Griffin

Another superb performance by Charlton Griffin. Please narrate Josephus Antiquities of the Jews next. Thanks...Jim Davis from Philly

lol the Romans were obviously a little bias in their retelling of history. but overall good audiobook!