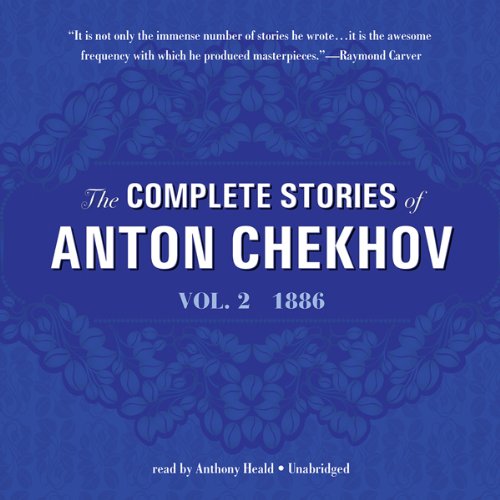 By: Anton Chekhov
Narrated by: Anthony Heald
Try for £0.00

A Russian author, playwright, and physician, Anton Chekhov is widely considered one of the best short-story writers of all time. Having influenced such writers as Ernest Hemingway, Raymond Carver, and James Joyce, Chekhov’s stories are often noted for their stream-of-consciousness style and their vast number. Raymond Carver once said, “It is not only the immense number of stories he wrote - for few, if any, writers have ever done more - it is the awesome frequency with which he produced masterpieces, stories that shrive us as well as delight and move us, that lay bare our emotions in ways only true art can accomplish.”

In The Complete Stories of Anton Chekhov, Volume 2: 1886, Blackstone has compiled fifty-five of Anton Chekhov’s short stories: Art, A Blunder, Children, Misery, An Upheaval, An Actor’s End, The Requiem, Anyuta, Ivan Matveyitch, The Witch, A Story without an End, A Joke, Agafya, A Nightmare, Grisha, Love, Easter Eve, Ladies, Strong Impressions, A Gentleman Friend, A Happy Man, The Privy Councillor, A Day in the Country, At a Summer Villa, Panic Fears, The Chemist’s Wife, Not Wanted, The Chorus Girl, The Schoolmaster, A Troublesome Visitor, The Husband, A Misfortune, A Pink Stocking, Martyrs, The First-Class Passenger, Talent, The Dependents, The Jeune Premier, In the Dark, A Trivial Incident, A Tripping Tongue, A Trifle from Life, Difficult People, In the Court, A Peculiar Man, Mire, Dreams, Hush!, Excellent People, An Incident, The Orator, A Work of Art, Who Was to Blame?, Vanka, and On the Road.

Anton Chekov (1860–1904) was the author of hundreds of short stories and several plays and is regarded by many as both the greatest Russian storyteller and the father of modern drama.

Praise for Anton Chekhov: “It is not only the immense number of stories he wrote…it is the awesome frequency with which he produced masterpieces, stories that shrive us as well as delight and move us, that lay bare our emotions in ways only true art can accomplish.” (Raymond Carver)

What listeners say about The Complete Stories of Anton Chekhov, Vol. 2

I have just finished listening to both volumes of the The Complete Short Stories of Anton Chekhov, narrated by Anthony Heald, and I have thoroughly enjoyed them but for one thing. As commented upon by another reviewer, Anthony Heald resorts to a rather odd, tremulous and timid falsetto when portraying Chekhov's female characters (and a few of the male ones too), though by the end of Volume 2 this had been toned down a little. Of course there must be some form of character differentiation or the reading would be far too monotonous but Mr Heald's default voice for the women makes them sound like a bizarre mixture of Michael Jackson and Disney's version of Winnie the Pooh, which is a little distracting! Apart from that, very good. I hope that a third volume is on the way.

the stories are brought to life with sonic resplendency thanks to the emotive, expressive narration of Anthony Heald. this is my fourth Heald book, after Homer's two epics and Crime and Punishment, and I hope dearly that he narrates some more classics. more Russian literature + Anthony Heald please!

What could Anton Chekhov have done to make this a more enjoyable book for you?

Chekhov did great, it was the translator I don't like.

I wish I would have checked the listing on Amazon before purchasing because as I found out 1 minute in, its the Constance Garnet translation. Other translations are better, but publishers prefer Constance's because they are public domain, so they get it free, but still can charge us the same price.

These 50+ stories are medium length and always delight

Which character – as performed by Anthony Heald – was your favorite?

Impossible to say, but I loved Heald's ability to give the different characters individual personalities. this really brings the stories to life.

I had an extreme reaction to the idiotic review of "Bathsheba Everdene". Shameful and pathetic that that one review was the only one appearing!! This is a high quality production and deserves better!!

Solid narrator, and Chekhov's not bad either!

What was most interesting to me about listening to volumes one and two of Chekhov's short stories, is how much Chekhov improved as a writer in a fairly short time frame. His early stories feel more like quick sketches, while toward the end of volume two there is more than just humor, there is depth, life.

Even better than the first collection

This collection of stories surpassed my expectations, listening to it fresh off the heels of the first collection (which I loved) I didn't think it could get better but I was wrong. The narrator again was superb and this is such a great peek into Anton Chekhov

Chekhov’s stories are among the best in the world. This is an excellent collection, and the reading by Anthony Heald is splendid.

What more can I say? It has my highest possible endorsement.

The Master of short stories

Chekhov's short stories are little windows into the lives of people. His brevity and wit are unsurpassed. The narrator read the stories extremely well.

I love Chekhov, every little sorry, I've been reading since I was a teenager, so I decided that having a collection of his stories to hear on my commute would be perfect.
What a disappointment with the narrator!
All the over acted. over the top voices, not only are very annoying, but do not depict the characters' personalities.
Really bad!

Enough with the falsetto!

Unfortunately no. Here is the reason. Mr. Heald belongs to the vast cohort of audio readers who think they must somehow mimic the voice of the characters in a dialogue. The way he does it is use the same falsetto voice indistinctly for women, children, old people, and timid people. Conversely, men are made to sound gruff and mumbling. The effect is condescending towards the character, the writing, and at times it's misogynistic. These mannerisms he injects into the dialogue prevent us from entering into the story and distract us from the language. As you go on listening, it becomes more and more unbearable. A terrible pity, for it would have been so easy not to do it! Why doesn't Audible give its readers some precise instructions? No falsetto! Don't add your interpretation to the text, don't play actor. Chekhov really does not need your help!

Would you be willing to try another one of Anthony Heald’s performances?

Absolutely not; unless he changes his style and stops mimicking the characters with his falsetto voice.

does not help chekhov

What would have made The Complete Stories of Anton Chekhov, Vol. 2 better?

better reader who showed he understood Chekhov. Heald reads too fast and is much too facile. Reads Chekhov as if the author were O'Henry.

Would you be willing to try another one of Anthony Heald’s performances?

Perhaps Mr. Heald understands Chekhov, but he didn't help me understand him at all.