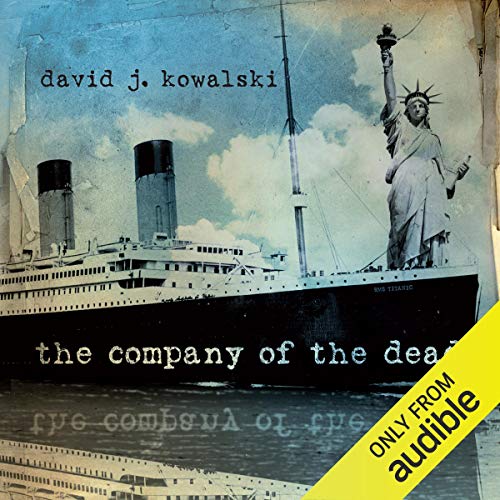 The Company of the Dead

The Company of the Dead

A mysterious man appears aboard the Titanic on its doomed voyage. His mission? To save the ship. The result? A world where the United States never entered World War I, thus launching the secret history of the 20th century.

In April 2012 Joseph Kennedy, nephew of John F. Kennedy, lives in an America occupied in the East by Greater Germany and on the West Coast by Imperial Japan. He is one of six people who can restore history to its rightful order - even though it would mean his death and the deaths of everyone he loves. A magnificent alternate history, set against the backdrop of one of the greatest maritime disasters of the 20th century.

David Kowalski is a medical practitioner, working in the field of Obstetrics and Gynecology in Sydney, Australia. He has published numerous articles in various medical journals and textbooks. The Company of the Dead is his first novel.

What could go wrong?

What would have made The Company of the Dead better?

Would you ever listen to anything by David Kowalski again?

No (Made a note of the author to ensure that)

Great if you need something to help you sleep while driving.
The premise is good, sort of thing I like ... Time Travel, War, What "might happen" etc etc. But losing the will to live while trying to get to a bit that is interesting is not my idea of fun.

Longer than the Ship!

Far far far too long - I lost interest so many times but had to go back just to see how it would end. ....... Wish I hadn't bothered!

I am sure I must have missed something along the way with this story, but I guess that is what happens when a book gets a bit dull in the middle, or at some stage and there are a lot of tedious and dull parts to this book. It all starts very well (a good way to begin, its always better to keep you gripped at the start rather than fighting your way through a book and hoping for the goods bits to happen!) and, I did think - wow - this is going to be an interesting story. And indeed the concept is brilliant, but the content leaves a lot to be desired. The jumping back and forward in time was not a problem for me and is easily distinguised throughout the whole of the story and the new world histories and theories that are depicited throughout are great, the characters, the places, the time specific ideology and descriptions are all well thought out, but its the telling of the story that is long, drawn out, unnecessary in places, and well - dull! I so wanted to enjoy this story and I do aplogise for not giving it a higher score, but it is not a full on brilliant story - its a good one, but not good enough for me to recommend unless you are prepared for the tedium you would need to endure to get from one part of the tale to the other.

No quibbles with narration.

Do you think The Company of the Dead needs a follow-up book? Why or why not?

I would not read it.

Starts off well, but becomes soggy, disorientated and boring.

if time travel is your gig and the idea of destiny interests you, this is your book

Sailing into an alternative history


I admit to bias as I love alternative history, historical fiction &amp; extremely long books. Maybe because of these reasons, I really liked this author's writing. I plan to read it again, as I know I will find even more reasons to like this book. It was a great listen for me so I will come back later &amp; read it again.