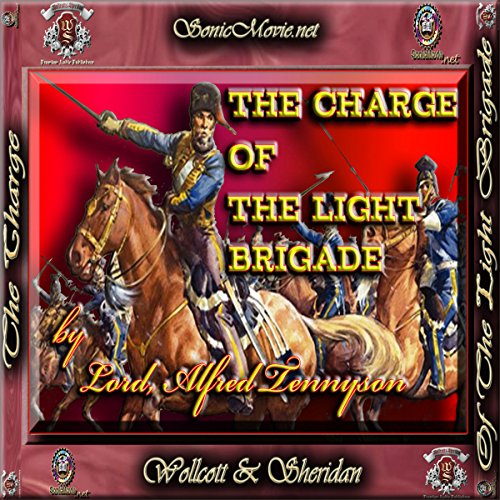 "The Charge of The Light Brigade" - written in 1854 by one of the great representative figures of the Victorian age, Lord Alfred Tennyson - celebrates the heroism of a British cavalry unit mistakenly ordered to attack a vastly superior Russian stronghold amidst the Battle of Balaklava during the Crimean War (1853-1856), a military conflict between Russia and a coalition of Great Britain, France, the Kingdom of Sardinia, and the Ottoman Empire.

What listeners say about The Charge of the Light Brigade

why make such a mess of a simple yet dramatic poem? I was going to give it to my grandson now I may just erase it. the narrator has gone compleately over the top with reverb and unessesary and overbearing effects, again WHY? the poem is dramatic, read it with passion yes but don't, as in this case, obliterate the words with technical wizardry and for the first 5 minutes make the poem uninteligable, even to someone who has known it for several decades, just WHY?

This is really bad can't understand the poem

What would have made The Charge of the Light Brigade better?

What was most disappointing about Alfred Tennyson’s story?

Would you be willing to try another one of K. Anderson Yancy’s performances?

Who knows couldn't tell what he was saying

If you could play editor, what scene or scenes would you have cut from The Charge of the Light Brigade?

The background music, way too loud

True it wasn't expensive but still a waste of money

How to ruin an immortal poem.

I really can not express my disappointment with this.

When they started by plugging websites... in something I had paid for... that was a bit off putting.
One of the sites was something like "sonic movie" or something.. and that should have been a warning. When they credit "Alfred Tennyson" with "by", and then give K. Anderson Yancy two (performed and directed), that also should have been a red flag. It takes an "extreme level of self-confidence" to think they "improve" one of the classic poems of English Literature with an old sound board, royalty free music clips, and bad echo effects... but K. Anderson Yancy sure does have it.

I'm always up for "Scotland the Brave', but using it in the background was a bit distracting (and not entirely accurate as The Light Brigade was not a Highland Regiment).

Then the music and effects took over, and pretty much drowned out the poem.

Worst of all was the distorted, Orc like voice they used to say "Forward The Light Brigade"....and "Charge the Guns" ...it sounded like a badly distorted clip from the Exorcist. (Does somebody there have a personal grudge against Lord Cardigan?)

It seems they wanted to have exciting music and sound effects to do the work that LORD Tennyson had done so well with the poem. Rather than let the poem do the job it has done so well for centuries, they enhanced this, tweeked that, and kept the narrator pretty much confined to slow, clear, emotionless reading. The poem itself sets the mood... not the background music you found on some royalty free clip CD.

THE POEM ITSELF SETS THE MOOD... THAT IS WHY IT IS A CLASSIC IN THE FIRST PLACE!!!!!!

Why the clip was stretched with music after the poem finished I do not know. It was very pleasant music, but not needed... and the plugs for some websites at the end were unnecessary as well.

This is one of my favorite poems, and what was done to it here... well someone should speak to the War Crimes Tribunal in The Hague about it.

It was only a couple of dollars... but I'm actually going to see if I can get my money back on this... it was THAT hideous.