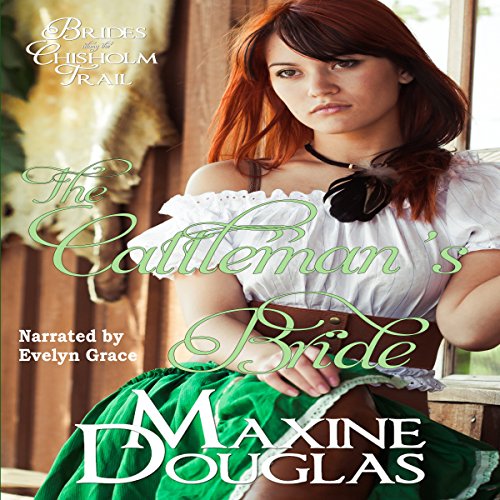 By: Maxine Douglas
Narrated by: Evelyn Grace
Try for £0.00

Suzanne Butler is saloon girl “Montana Sue” at the Lady Gay in Dodge City. She's been hiding from an arranged marriage for more than a year. Word has reached her that the man she spurned is on his way to Dodge City to reclaim her.

Cyrus Kennedy is a widowed Texas cattle baron. He's expected to deliver his cattle to the stockyard in Dodge City, make arrangements with a new housekeeper, and find a tutor for his 10-year-old son. He didn’t expect a former feisty saloon girl would be going back to Texas with him.

Will Suzanne be able to shed “Montana Sue” and avoid an unwanted marriage? What will Cryus’ men and his boy think when he brings the red-headed Suzanne Butler home with him along the Chisholm Trail?

What listeners say about The Cattleman's Bride

My favorite of the series

Maxine Douglas has drawn me in and had me set in the old west, where men are strong and protective, willing to do anything to take care of those he loves. This story is about Suzanne, or as we know her in previous books, Montana Sue. Far from the crazy woman she was in book two, Suzanne's story is one of many women who were mail order brides. Promised by her father to marry an older, dangerous man, Suzanne with the help of her mother ran away to start a life somewhere else, away from her certain future. When it is clear her father and this man will not give up looking for her, she finds a home with Cyrus. Cyrus is looking for a homemaker and tutor for his son, but never thought of getting married. When he finds out her situation, he takes matters into his own hands, making her his wife. But will this be enough to prevent Suzanne's past from catching up with her? And will their marriage work? How will his son react? Douglas has woven a story of love and passion, danger and uncertainty. I loved Suzanne, finding her character a woman with many sides. She adapts to any situation as her survival skills kick in. Cyrus is a wonderful man, protective, and a great father. This is a great story, a beautiful addition to the series. With narration by Evelyn Grace, the story comes to life. I think this is the best of the three that she has done, really fixing her pace making it an enjoyable listen.

This audiobook takes you back to the Old West, when men carried guns and didn't hesitate to protect their women and property with them. It starts with Suzanne running away from an impending arranged marriage to an older evil man. She's already run once on her own, but this time she won't be alone. She was just hired by an attractive cattleman, Cyrus, to tutor his son and help around the house. When Cyrus decides on a more permanent solution to her problem, will Suzanne go along with his proposal? Will it be enough to keep her safe?
I really enjoyed this book. The story flows well and keeps you listening while the narration by Evelyn Grace is very pleasant, easy to listen to and very well done.

The cattleman gets the girl...

Suzanne is on the run from her father & the evil scoundrel to whom she’s been promised. She thought that she was safe working as a saloon girl in Dodge City a later until an urgent msg warning her that she’s been found. Suzanne advertises for a tutor position in Texas and is hired by a Texas cattleman. Widower Cyrus needs a housekeeper and tutor for his son and hires Suzanne; he is not prepared for the feelings that she stirs in him. As they travel back to Texas, and grow close, Cyrus decides to marry Suzanne to save her from her cruel betrothed...in name only. Will Cyrus & Suzanne be able to withstand the temptation of each other? Is Suzanne safe from her past? Great HEA with her dad redeeming himself. Enjoyed this fast paced historical romance from this new-to-me author.
I accepted a complimentary copy of this book in exchange for an unbiased review.

Suzanne was forced into a life she did not quite fit into hiding from her father and now she has to start over again because he is on his way. She finds a new job and is hoping the man will arrive in time before her father does. She is trying to hide the past form her new employer, but small town gossip is a hard thing to keep quiet. Suzanne is a great and strong female character, that you will fall in love with. The story is a sweet romance with some fun cowboy action. The narration is nice.

Suzanne Butler left home with the aid of her mother when her father promised her in marriage to a man whose previous wives died mysteriously. Arriving at Dodge City she changed her name to Dakota Sue and worked in a salon as a caretaker-nanny to the children of the 'ladies' of the salon. Having done this for over a year, she received word from her mother that her father and her promised husband-to-be found out that she was in Dodge City and heading her way. Sue, scared of their arrival, had to figure out a way out of Dodge City and somewhere else. Hence she places an ad as a nanny/housekeeper. Her ad was answered by the widow Cyrus Kennedy. The attraction is immediate but neither truly admits it at first. This story is a sweet, heartfelt story of two people who have been hurt but love does concur all. Maxine Douglas once again gives you a story that you will truly enjoy and the narrator does a great job in the telling.