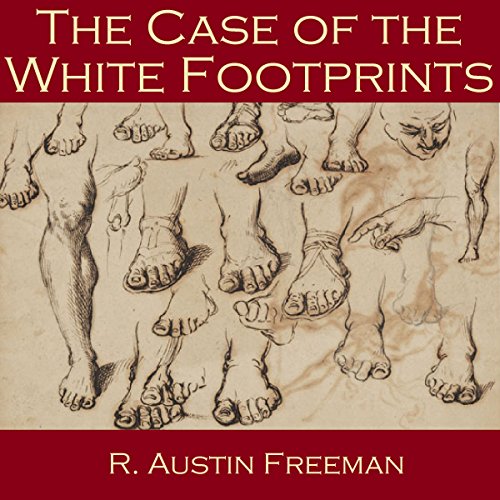 The Case of the White Footprints

By: R. Austin Freeman
Narrated by: Cathy Dobson
Try for £0.00

Richard Austin Freeman (1862-1943) was a British writer of detective stories, mostly featuring the medico-legal forensic investigator Dr. Thorndyke. Freeman used some of his early experiences as a colonial surgeon in West Africa in his novels.

The Case of the White Footprints is a murder mystery set in Margate.

A lady has been found dead in her room in a boarding house. At first glance it looks like a clear case of suicide, but then the two doctors attending the death spot a set of white footprints in paint on the red linoleum of the floor. As the house is currently being repainted, and the window-sills were still covered in wet paint, it is clear that the woman has been murdered by someone who entered and left through the window.

Moreover, the footprints have some strange peculiarities. They are bare footprints...and on both feet it appears that the little toe is missing. When Dr. Thorndyke is called onto the case these extraordinary footprints lead him immediately to the track of the murderer.

What listeners say about The Case of the White Footprints

In "The Case of the White Footprints" by R. Austin Freeman, Dr. Jervis is visiting his friend, Dr. Foxton, who laments the boredom of his own practice compared with those cases of Jervis, both a lawyer and a doctor who works with Dr. Thorndyke. But then Dr. Foxton gets called to a case where a woman is found dead, presumed to have committed suicide. Jervis then points out that there are fresh footprints in paint heading out the window, and these fingerprints are missing their little toes on each foot. Obviously, the woman did not commit suicide but was killed. Jervis then makes some deductions about the cause of the missing toes, but it takes Dr. Thorndyke to solve the case.

This story is a good example of how Dr. Thorndyke uses scientific knowledge to solve his cases. Not for nothing is he known as the first CSI, as he combines his understanding of science and legal issues. The story also makes use of Freeman's experience early in his life as a surgeon in colonial West Africa, as it contains a character from Sierra Leone and discusses medical conditions that include one from Africa.

Cathy Dobson performs the audio edition of this story. It seems a little curious to have a woman acting out the part that is narrated by Dr. Jervis, a man. However, Dobson has a low enough voice that she pulls it off. She uses believable voices for each of her characters and good timing in her performance.

"The Case of the White Footprints" turns out to be a pretty basic mystery. It doesn't take long for Jervis to narrow down the suspect list to two, and then it just takes an understanding of obscure medical issues to solve it. There are no usual red herrings or significant twists to the plot. I give the story three stars.

The voice was unclear in certain parts

It was hard to understand certain parts because the range of reader was not low enough. It seemed as if the voice used is not the reader's normal voice.