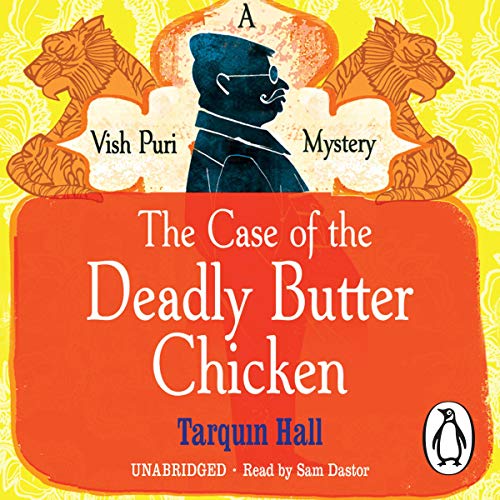 The Case of the Deadly Butter Chicken

By: Tarquin Hall
Narrated by: Sam Dastor
Try for £0.00

Vish Puri is as fond of butter chicken as the next Punjabi. And when there's plenty on offer at the Delhi Durbar hotel where he's attending an India Premier League cricket match dinner, he's the first to tuck in. Irfan Khan, father of Pakistani star cricketer Kamran Khan, can't resist either. But the creamy dish proves his undoing. After a few mouthfuls, he collapses on the floor, dead. Clearly this isn't a case of Delhi Belly.

But who amongst the Bollywood stars, politicians, bureaucrats, and industrialists poisoned Khan is a mystery. And with the capitals police chief proving as incompetent as ever, it falls to Most Private Investigators to find out the truth.

Puri is soon able to link Khan to a bald bookie called Full Moon, and all the clues point to the involvement of a gambling syndicate that controls the illegal X billion dollars betting industry. The answers seem to lie in Surat, the diamond cutting and polishing capital of the world (where Puri's chief undercover operative Tube light meets his match), and across the border in Pakistan, Puri's nemesis, the one country where he has sworn never to set foot.

Or do they? A certain determined, grey-haired lady with a unique insight into the murder believes that the portly detective is barking up a wrong tree. Is Mummy-ji right? Is there more to the murder than meets the eye? And why, to make life even more complicated for Vish Puri, has someone tried to steal the longest moustache in the world from right under the nose of its owner - literally?

What listeners say about The Case of the Deadly Butter Chicken

Entrancing from start to finish

My second Tarquin Hall/Inspector Vishpuri - and I can't wait to get on to the next. Hall has caught the flavour of India - the characters, the dialogue - with absolute precision. 'Don't do tension' Vishpuri exhorts at one moment. This portly private detective battles with murderers, moustache cutters, his weight, his 'mummy-ji', and all manner of life; and at the same time we learn of the terrible tie of Partition, and prejudices that still exist between India and Pakistan and, central to the plot, the corruption in gambling on cricket matches. Funny, informative, with a good story; and Sam Dastor juggles the voices with such familiarity that you really believe them. On to the next, and I can only hope Hall produces a fourth soon.

Very enjoyable read, likeable characters and interesting on India, present day and its history. I look forward to listening to the next in the series

Just Love these books on Detective Puri, this one is no exception. They are exciting, evocative of India bringing to life that interesting country and written with great humour. An excellent read - just waiting for more novels. The reader is also amazing! Should be 6*’s!

Loved everything about this book!

I am a huge fan of Alexander McCall Smith's No 1 Ladies Detective Agency series & was looking for something similar to listen to. Google led me to two authors who write similar novels based in my own country. Vaseem Khan's novel was a good listen, but this book is funnier. I found myself chuckling often and loved the characters, the setting and the plot. The accent is spot on too. The only negative thing I would say about the narration of this audiobook is that I wish more care had been taken with the Hindi pronunciation - there were so many words that were pronounced wrongly.

Would you consider the audio edition of The Case of the Deadly Butter Chicken to be better than the print version?

The audio version is perfect as Sam Dastor with his accents and characterizations makes the book "come alive". For me, reading it in printed form, would not have done it justice.

What was one of the most memorable moments of The Case of the Deadly Butter Chicken?

So many wonderful moments-I actually laughed out loud many times which is something a book rarely achieves, but the revelation of the atrocities to Hindu and Moslem women at partition in 1947 was a horrible eye-opener. I had never before heard of the tragedies that befell 1000's of women and families at that time. The description elevated this book from hugely entertaining and comedic to one of serious historical content. Very cleverly written by Tarquin Hall.

Which character – as performed by Sam Dastor – was your favourite?

All the characters are so well betrayed and although Mummy-ji is gorgeous my favourite has to be the hero Vish Puri.

Cry?-no. Laugh? A lot of the time. It was highly humorous.

I will hunt out anything else written by Tarquin Hall and hopefully narrated by Sam Dastor, who is already in my favourite narrators list. Excellent, so pleased I came across this gem.

This is my second Vish Puri book and I am in love with the all the characters. Mummy ji especially.

Love these stories. My only complaint is there aren't enough of them. I particularly enjoy all the sidekicks (including Mummy Ji) without whom Detective Puri wouldn't be able to solve any of the riddles posed. More please.

Once again, I entered into the delightfully nutty world of Puri and family. Utterly charmed by Mummy and her subversive tactics! This story starts off in comic vein, but evolves into a fascinating tale of present day India and Pakistan, and the deeply held prejudices resulting from partition. It's a richly-woven performance by Sam Dastor, who brings the entire story to life with his excellent characterisations. The somewhat pompous Chubby is made to rethink his ideas and misperceptions in a way that manages to convey the overwhelmingly disasterous effects of partition.

This was a great listen. The narrator really made the book with his different character voices and accents. I found myself laughing aloud and will definitely purchase more in the series.