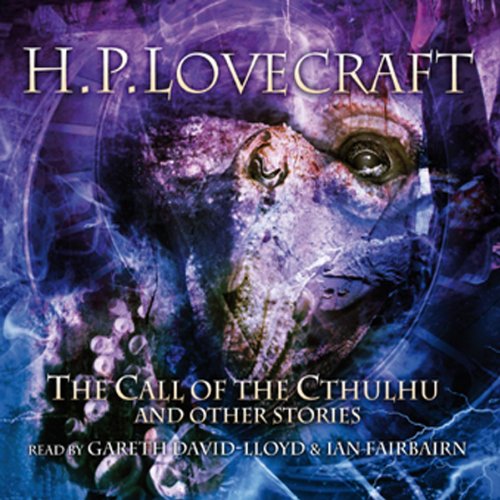 The Call of the Cthulhu and Other Stories

Includes the short stories "The Hound" and "The Festival"

H. P. Lovecraft is considered to be one of the most influential horror and fantasy writers of the 20th century. His work is frequently compared to the likes of Edgar Allan Poe, and explored the idea that life is incomprehensible to human minds and that the universe is fundamentally alien.

"The most merciful thing in the world, I think, is the inability of the human mind to correlate all its contents. We live on a placid island of ignorance in the midst of black seas of infinity; and it was not meant that we should voyage far."

"The Call of Cthulhu", written in 1926, is probably Lovecraft's best-known work. Discovering notes left by a deceased relative, the narrator pieces together the whole truth and disturbing significance of the Cthulhu cult. This release also contains the shorter tales "The Festival" and "The Hound", in which gravediggers bring home more than they bargained for!

Gareth David-Lloyd has appeared the second series of the BBC sci-fi series Torchwood. Before playing Ianto Jones, Gareth trained at the National Youth Theatre, and his credits include the role of Sebastian in Twelfth Night as well as television appearances in Mine All Mine, Absolute Power, and Rosemary & Thyme. Veteran actor Ian Fairbairn is best known for his appearances in Timeslip as Alpha 4 and Dr. Frazer, while also starring in four classic Doctor Who stories. Other credits include: Stand up Nigel Barton, Emergency Ward 10, and The Professionals.

"I think it is beyond doubt that H. P. Lovecraft has yet to be surpassed as the twentieth century's greatest practitioner of the classic horror tale." ( Stephen King)

really good listen however very short only 1hr55, Gareth's voice is very calming to listen to though

Having tried to read these stories as a teenager and finding them unintelligible I have been reticent to take them on again. After coming into contact with them at work and seeing that they were available read by a favourite actor I was tempted to give them another go. It was well worth it. Having them read out to me broke through the density of the language and made me realise that the stories were intriguingly intertextual and sophisticated. This is not just a collection of bizzare stories of the supernatural but also stories about humanity and the things that frighten us in ourselves and the world around us.

I don't usually go for an audiobook that is less then several hours long. However, this is Lovecraft and this is not your usual narration. These narrators are creepy, haunted souls, given to fits of passion. They are impossible to ignore, fitting since this story is impossible to stop listening to. The power of the words and the excellence of the narration is an infectious seed of disturb that takes root in the listener. I am very pleased, even if I'm not likely to sleep tonight.

I bought this thinking that it was going to be a larger collection of stories, and I was a bit disappointed to find that it is only three stories:

The readers have a pleasant mild British accent, which suited the stories well. I did find the volume slightly lower on "Cthulhu" than on the other two tracks.

Despite the small number of stories included in this collection and the small volume issue on "Cthulhu", I feel the purchase was justified. "Cthulhu" in particular is among Lovecraft's best tales and the other two are pretty good as well.

Chill Inducing Horror at Its Best

If you could sum up The Call of the Cthulhu and Oher Stories in three words, what would they be?

What other book might you compare The Call of the Cthulhu and Oher Stories to and why?

The short stories of Edgar Allan Poe. Poe and Lovecraft are both masters of horror. The kind that gives you nightmares and enjoyment in a well written story at the same time.

Have you listened to any of Gareth David-Lloyd and Ian Fairbairn ’s other performances before? How does this one compare?

I have listened to Gareth David-Lloyd before but not Ian Fairbairn. Gareth is one of those narrators that could make reading the phone book interesting listening. This is one of his best performances, though. He gets so involved in the story that he takes you right along with him.

If you could rename The Call of the Cthulhu and Oher Stories, what would you call it?

Masterpiece of the Macabre

I think it would've been even better if Gareth David-Lloyd had narrated all of the stories. Ian did a good job, but next to Gareth, Ian's performance felt lackluster even though the stories he read were still creepy as hell.

True master of terror and the originator of the Cthulu Mythos

Hp Lovecraft's stories are captivating. The narrators do a wonderful job conveying his story. Love the whole Cthulu Mythos and all the stories that
Lovecraft created.

How was the narrator? Very well read by both parties. I just wish that Gareth David-Lloyd would have used his natural accent instead of adding an English overtone. Other than that subtly, it was beautifully read. Bravo!

Where does The Call of the Cthulhu and Oher Stories rank among all the audiobooks you’ve listened to so far?

Story: 4/5
Narration: 3/5 Although the actor did an excellent job representing the narrator, he was quite hard to understand at some parts of the book. Words are not always pronounced correctly and he tends to leave words unfinished.

The Hound:
How dark and atmospheric it was throughout. Dreamlike.

Call of Cthulhu:
The over all implication of it. It poses the question: Are humans truly the supreme beings in our existence? H.P Lovecraft answers: no.

The Festival:
Again, the sinister, macabre atmosphere. Even more dreamlike than The Hound.

What aspect of Gareth David-Lloyd and Ian Fairbairn ’s performance would you have changed?

In The Hound, the narrator might have been more clear with his words. I had to look up the text to read along while listening.

Not this entire audiobook, as it is three different stories. But each one is best listened to in one sitting.

Great stories, narration could be better

Did The Call of the Cthulhu and Oher Stories inspire you to do anything?

The narrators did a fine job of bringing these Lovecraft tales to life. I've been a fan of Lovecraft for years but this was my first experience with these stories in audio version. I enjoyed them and it inspired me to revisit other Lovecraft stories both in print and audio.

A Wounderful Gateway into Lovecraft's Books

What made the experience of listening to The Call of the Cthulhu and Oher Stories the most enjoyable?

I Love this style of Book. I love the style of the narration. In the first story The Hound the protagonist is unlikeable dip that is getting a karmic justice reaped upon him and the narrator portrays him as a snob. In The Call of Cthulhu the protagonist tries to be scientifically detached but he finds that subject matter slowly driving him mad and the narrator gives him nice dry scientific tone but dripping with suppressed horror toward the end. In the last tale The Festival the protagonist is already slightly cracked and your never really sure if this was all in his head or this really happened to him.

What other book might you compare The Call of the Cthulhu and Oher Stories to and why?

Lovecraft defined his own genera a scientific or detached reading or set of stories written by people that should be well grounded in reality that slowly descend into madness.

What about Gareth David-Lloyd and Ian Fairbairn ’s performance did you like?

I think I covered this already

If you could take any character from The Call of the Cthulhu and Oher Stories out to dinner, who would it be and why?

This is a nice Gateway into Lovecrafts other stories. If you like this story you'll like the rest of his stories but if you don't you probably won't. Most of Lovecrafts stories are written in an academic format of supposedly smart people that have odd run ins with Lovecrafts Gods or Outer things, and for the most part ether adapt and triumph, go mad, or die horribly. And your never quite sure which is going to happen each time.