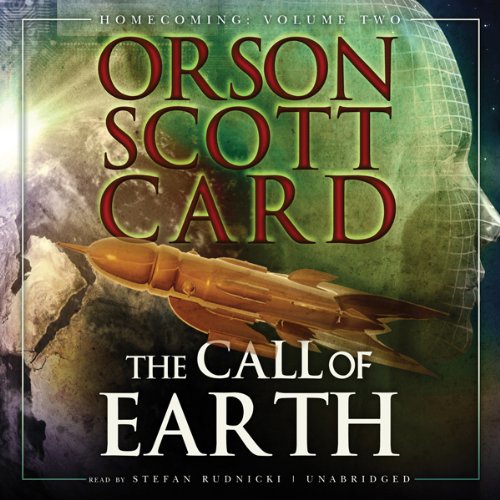 The Call of Earth

The Call of Earth

For millennia, the planet Harmony has been protected by the Oversoul, an artificial intelligence programmed to prevent thoughts of war and conquest from threatening the fragile remnant of Earth's peoples. But as the Oversoul's systems have begun to fail, a great warrior has arisen to challenge its bans. Using forbidden technology, the ambitious and ruthless General Moozh has won control of an army and is aiming it at the city of Basilica.

Basilica remains in turmoil. Wetchik and his sons are not strong enough to stop an army. As Lady Rasa, through whom the Oversoul speaks, attempts to defeat Moozh through intrigue, Nafai and his family prepare to voyage to the stars in search of the planet called Earth.

The recording issues must have been fixed

Card delivers again. I felt so thoroughly warned by the other reviewers who mentioned that the recording was terrible and apparently unedited, that I almost didn't order the book. I heard none of the coughing, errors, repetitions or personal comments that any of the other reviewers mentioned. Perhaps Audible has since edited this work. On to the book. I think what I like most about Card's work is what he teaches me about human nature, my own nature. I always walk away feeling a little better capable of understanding myself and others through his contemplative observations of his characters. Well done. Please keep them coming.

Who edited this thing?

It took me awhile to get into this story. The Narrator's voice is a little.. odd for this kind of book, but by the end of book 1 I was fully hooked, and looking forward to picking up book 2.

The story is still good - but the editing on book 2 is HORRIBLE. The reading stops and re-starts. You can hear where the narrator coughs, or his voice gives out a bit and he restarts reading.. at one point, he even laughs "Er.. I assume that's trees.. treas.." and then starts re-reading the sentence again.

Great story, horrible recording. Someone was sleeping at the wheel here.

watership down - the hunt for mates -

This series is very entertaining, especially if you've studied the bible and like SCI-FI.

This one starts out slow and seemed destined to bore me, yet it not only avoids that shoal, but it stood on its own quite nicely. As a sequel it wasn't what I expected, but it was worth listening to anyways.

It was good but the characters are still a little dry...hoping that the next book will develop them a bit more

Even better than the first book

It's nice when a sequel improves upon the original. Card gets a lot less linear in this book, introducing more plot twists and greater depth to his characters. The result is that I am never bored. Great read!

Slow story with steady build up, but still stuck

The second book of Orson Scott Card's Homecoming series lingers like the first on the theme of exodus to a promised land... in this case a planet. In the story biblical themes are quite prominent. While the Over-Soul (God) is just a mighty computer, we have the theme of tension between brothers - the eldest that is is cheated out of his inheritance, the theme a dictator that doesn't want a group of people (Njafai and his mother) to go from the city of Basilica (kingdom) etc. These themes also resonates with the Book of Mormon. It seems Card is really drawing from his religious background. Yet the story progresses very slow. While Rudnicki again gives a solid performance, I am not sure how much patience is needed for the story to go somewhere. (Even Song of Ice and Fire seems to move quicker at times.) But I am not giving up, maybe the next volume will have some action.

I repeat what the other reviewer wrote. The book is good, but there are numerous times when the reader repeats a phrase - five of them so far halfway through the book - and one time he clears his throat and says, "Excuse me". Normally Blackstone Audio does such professional production, I'm surprised by this.

This series is so good!

Loved it. As always Card weaves a story of sci-fi fascination always finding a way to intertwine the human condition. So good.

get on with it

the narration continues to be fantastic but this installment of the story is dragging. feels like nothing happened in this book!