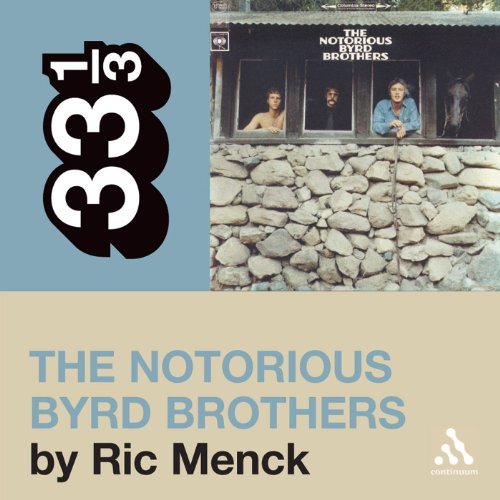 Ric Menck's ode to The Byrds' The Notorious Byrd Brothers is multi-faceted, and listening to Christopher Hurt's lively narration is sort of like going to a wonderful, surprising lecture - except you can stay at home. Like any good story, Menck's account of The Byrds' life has interesting plot and great characters, but these three hours also hold a plethora of details about The Byrds as a group. Menck discusses the band's search for cohesion, and their personal and professional dramas at the time of the release of the album.

The Byrds' music reaches across genres to beat poetry, blues, jazz, and gospel, and this audiobook will add another critical dimension to the album's historic place in the cannon of American art making.

By the time Roger McGuinn, David Crosby, Chris Hillman, and Michael Clarke entered the studio to begin work on this album, they were basically falling apart at the seams. "Ladyfriend", a song written by Crosby, had just failed miserably as a chart single despite the fact that he lobbied hard to get it released. This - coupled with the fact that he made what the rest of the band considered an embarrassing political speech onstage during their set at the Monterey Pop Festival, and then sat in with rivals the Buffalo Springfield the following day - pushed McGuinn and Hillman in particular to the limits of their patience. Then, for the Notorious sessions, Crosby presented a song called "Triad", written about a threesome, and although McGuinn and Hillman reluctantly agreed to record it, they later decided to place a less controversial Goffin & King pop number called "Goin' Back" on the album instead. Crosby declared the song banal and refused to sing on it. A few too many studio flare-ups later, McGuinn and Hillman finally screeched up into the Hollywood Hills in their Jaguars and fired Crosby on the spot.

Also brooding during this period was drummer Michael Clarke, who had always borne the brunt of the other band members' rage while recording. He was by far the least accomplished member of the band musically, and when they suggested bringing in a studio drummer to embellish some tracks (Jim Gordon, later of Derek & the Dominos fame), he finally declared he'd had enough and moved to Hawaii to get away from the music scene altogether.

So, McGuinn and Hillman were left to cobble together an album with the help of producer Gary Usher (known for his work with Brian Wilson, the Millenium, Sagittarius and many others). The fact that it turned out to be one of the defining albums of the 60s psychedelic pop experience was either a sheer stroke of luck, or a testament to McGuinn and Hillman's determination to prove that they didn't need Crosby's help to construct their masterpiece.

Brilliant evocation of an era & a passionate defense of an album

The performance of the narrator and the writing in this book were fantastic. This book really brings an era to life and is one of the best 33.3 books I’ve listened to. I must’ve returned to the album 20 times in the last few weeks, peeling back layers and staring further into glimmering depths.