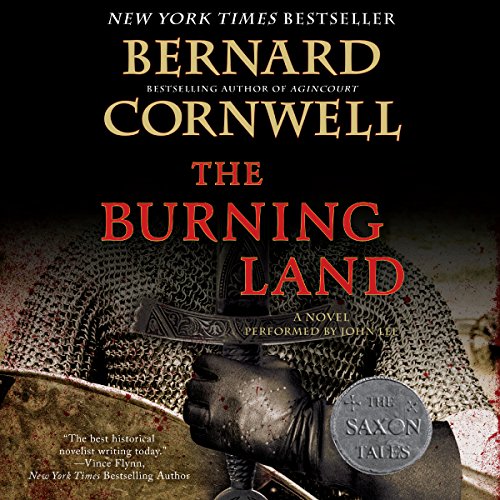 In a clash of heroes,the kingdom is born. At the end of the ninth century, King Alfred of Wessex is in ill health; his heir, an untested youth. His enemy, the Danes, having failed to conquer Wessex, now see their chance for victory. Led by the sword of savage warrior Harald Bloodhair, the Viking hordes attack. But Uhtred, Alfred’s reluctant warlord, proves his worth, outwitting Harald and handing the Vikings one of their greatest defeats. For Uhtred, the sweetness of victory is soon overshadowed by tragedy.

Breaking with Alfred, he joins the Vikings, swearing never again to serve the Saxon king. Instead, he will reclaim his ancestral fortress on the Northumbrian coast. Allied with his old friend Ragnar--and his old foe Haesten--he aims to invade and conquer Wessex itself. Yet fate has different plans. The Danes of East Anglia and the Vikings of Northumbria are plotting the conquest of all Britain. When Alfred’s daughter pleads with Uhtred for help, he cannot refuse her request. in a desperate gamble, he takes command of a demoralized Mercian army, leading them in an unforgettable battle on a blood-soaked field beside the Thames.

In The Burning Land, Bernard Cornwell, “The reigning king of historical fiction” (USA Today), delivers a rousing saga of Anglo-Saxon England--an irresistible new chapter in his thrilling Saxon Tales, the epic story of the birth of England and the legendary king who made it possible.

I got used to Jonathan Keeble

Would you listen to The Burning Land again? Why?

Yes - I enjoyed the story and the narrator was ok.

It is very descriptive just like the earlier books of the series. There was an allusion to something I never expected - if it is indeed true, then I am stunned and disappointed in the element of the storyline, but everything else was great.

No. The narrator's dynamics (in particular, his emotion) was not up to snuff. There was an event in this story which would have crushed Uhtred's heart (1st person narrative) - you never felt the anguish that should have been there.

Audio publishers - if you have a great narrator, commit the series to them. They know the books, the characters, and have established the listener's expectations. It's like book publishers changing the author of a long running series (Fleming, Ludlum, Clancy) - readers lose interest because it just isn't the same.

I was REALLY disappointed with this book. The narrator is SO different than the ones that came before that I found it distracting. His pronunciation of the place names, and people, are so different that it makes it seem like a completely different story instead of one in a series.

I love all of these books! This is a great continuation of the story of Uthred. I do miss the previous narrator. It was hard to get used to the different style of reading. Once I got used to the new narrator I was able to enjoy the story. Overall I loved it!

Would you be willing to try another one of John Lee’s performances?

After Jonathan Keeble, this narrator is a huge disappointment. When Keeble reads, you imagine Uhtred sitting by a fire and telling you his life story. It's lively. There's emotion and passion and humor. When this guy reads, you imagine someone with a book in his hand, reading quickly and flatly, as if he just wants to get it over and done with. He reads battle scenes as if reciting a grocery list. No sense of rising excitement -- no sense of excitement at all, in fact. Apparently trading sword blows with Danish Vikings is a ho-hum sort of thing, judging by the reading. The text says "'Shield wall!' I yelled." ... but the narrator doesn't even bother to raise his voice on the words "Shield wall." Seriously? Did the words "I yelled" not provide a clue on how to read the sentence?

The story is good, but I doubt I'll be able to endure 11 hours of this flat, passionless delivery. Makes me wonder who listens to some of these readers and decides to hire them.

the story is as good as the rest, but the narrator is not nearly as good as john keeble.

Changing narrators frequently is NOT a good idea

Adjusting to the reading speed and voice patterns of different narrators is one thing, but it is a different matter to have to struggle to recognize the names of key protagonists, which some narrators read completely differently. It is very annoying and takes away from the listening experience of the otherwise great story.

why did they change the narrator

Historical novels stand of fall on detail. Cornwell writes as if he has been to the 9th century Wessex. Each of his battles poses different tactical questions and different answers. His accounts of the fire and slaughter, and of Viking methods of extorting money, would seem gruesomely exaggerated if they weren’t so often based on old legends or confirmed by archaeology. “Saxon Tale’s series is about the battle for supremacy between the Saxon and the Danes in 9th century Britain. Uhtred of Bebbanburg, a fictional character is the star of the series and battles for Alfred the Great of Wessex to unify Britain. The book is written in Uhtred’s voice as he looks back on an exciting life. Historically Cornwell’s, major contribution is to tell the story of Ethelflaed, an actual heroine forgotten by most scholars. She is the daughter of Alfred married to the leader of Mercia. She became known as “Lady of the Mercian’s.” Cornwell is adept at enveloping his fictional character into British history. His use of geography, instruments of battle, strategy and ancient vocabulary is faultless. Cornwell is the master of battle scenes. Bernard Cornwell is probably the best historical novelist writing today. This series is about the battle to unify Britain by the Saxons. This is a great way to learn some British history. I greatly enjoyed the great baritone voice of John Lee, who did an excellent job narrating the story.

The story was pretty good, but this is the third narrator so far. It is hard to imagine a viking warlord sounding like a British gentleman. So, now I'm left wondering if it is even worth continuing this series or not.

I am addicted to audio books, and have listened to hundreds of them. Cornwell is one of the very best writers of historical fiction. This book is full of action, with vivid descriptions of battles, a solid story line, and well-developed characters. I was entertained throughout the entire book. Narration was excellent. Cornwell has the ability to make me feel like i'm back in time. He has a unique way of helping the reader understand everyday life, in the 800's, in the context of action and intrigue. It never drags. This book, like AGINCOURT, is an excellent book, and the narration is so good that I would recommend the audible version over print. I highly recommend this book.